A Bunch of Headlines I Have to Mention

RUSH: All right. Here are the things. I’ve gone through The Stack here, and these are the things that I really want to try to get to or at least mention before the program ends today. So let me just do the headlines. I gotta do a couple things and come back to the phones. We’ll see if we can get some of these in. The first is from Townhall. “Liberals Called Trump Mentally Unfit, Now They’re Being Treated for ‘Trump Anxiety Disorder.‘” This is about a story that therapists all over this country are busier than ever. Clients are coming in saying they literally have Trump Anxiety Disorder. 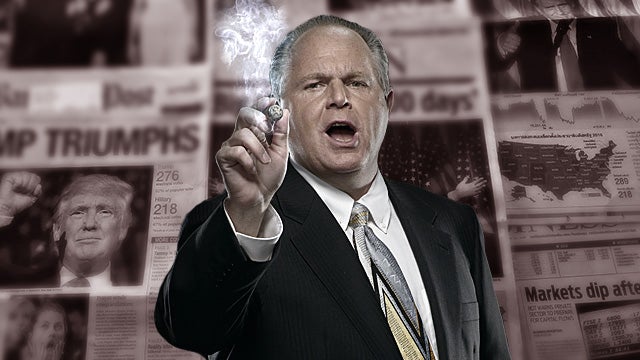 They’re having trouble functioning. These are the same people who said that Trump was mentally unfit. In addition, there is a story… Let’s see. “New Study Claims Global Warming Will Cause Thousands More to Commit Suicide.” So suicide rates are climbing because it’s hot. Trump Derangement Syndrome. Times are tough and dangerous. I thought it was Trump driving people to suicide, but now it’s climate change. Oh, you notice, by the way, it’s summer so it’s not “climate change”? It’s “global warming.” We’re back to calling it “global warming,” since it’s summertime and it’s hot.

In the winter, when it’s freezing — which it always is in winter — they call it “climate change.” But now that it’s hot, it’s “global warming,” and it’s causing people to commit suicide. You remember the story (we had this not long ago) of a National Geographic photographer took a picture of a polar bear dying from climate change? That photographer has now admitted that the whole thing was fake and that she knew it was fake and they purposefully spread a fake story, a fake photo of a polar bear dying from climate change.

She now admits — after it went viral — that the whole thing was false and a ruse. “U.S. and China Said to Seek to Restart Talks to Diffuse Trade War.” This is right on schedule. Everybody’s saying, “Trump’s blowing it with these tariffs, man! He’s gonna choke off the economy. The Fed is gonna have to raise interest rates to stop the economy! It’s all because of the trade deals and tariffs.” No. It’s all happening according to schedule. This is about Mnuchin talking to his counterpart with the ChiComs to avert the trade war while leveling the playing field.

Paul Krugman at the New York Times is a Nobel laureate — a Nobel Prize winner for economics — and the guy doesn’t know jack! This is the guy who predicted after Trump won the election, that we are guaranteed to have one of the deepest depressions the country has ever seen. His latest column: “Why One Quarter’s Economic Growth Tells us Nothing.” One quarter at 4.1% GDP doesn’t tell us anything, says Paul Krugman. Meanwhile, somebody who does know economics — Jamie Dimon, the chairman/CEO of JPMorgan Chase — “Says Trump’s Tax Cut and Deregulation Have ‘Accelerated Growth.’”

He gives Trump total credit for this, says that Trump’s tax cuts and deregulation efforts have helped out the U.S. economy. It can’t be due to anybody else. Companion story. “Worker Pay and Benefits Climbing at Fastest Pace in 10 Years.” Fastest pace in 10 years! I mean, the economic news… Of course, the companion story to this: Economic news no longer matters in elections. Good economic news, bad economic news are no longer a factor in people’s opinions of the president. Very convenient, isn’t it?