CALLER: Well, I guess this makes me the most listened to radio talk show caller in America.

RUSH: It does, indeed! (chuckling) Exactly right. This is your big showbiz break.

CALLER: What an honor. Well, I’ve been thinking about something, Rush. You talk about cigars from time to time.

CALLER: I’ve been a cigar smoker for 20-plus years. I’m in my forties. I started as soon as I could, and I remember in the 1990s one of the biggest-ring-gauge cigars you could get was a Diamond Crown, and it was a whopping 54 ring gauge.

RUSH: Right. Wait just a second. Hey, we need to bring the audience in on this.

RUSH: They may not know what ring gauge is. It’s simply the circumference of the cigar.

RUSH: Centimeters is what we’re talking about here, and that’s the ring gauge. They call it ring gauge because it would be the equivalent of a ring size.

RUSH: So it’s the thickness of the cigar that we’re talking about here, 54 is thick. That requires a pretty open mouth to smoke — and you’re right. Back then, Diamond Crown, 54 ring gauge was pretty much it. But that’s been exceeded a lot by now.

CALLER: That’s my point, that even if you look at articles — I was paying attention back then in the 2000s — the cigar industry called that cigar kind of a blip on the radar, that these large cigars will never hang around. Here we’ve been through 2000, 2010 to today, and it went from 60 ring gauge to 70 ring gauge. (Unintelligible) almost 80 ring gauge. So, it’s obviously not a blip in the industry. I’m just wondering if you ever thought, one, do you smoke the ring-size gauge cigars, and what do you think is the trend? Why was it not a blip and why is it continuing to get bigger and not stabilize or go back to smaller size?

RUSH: Well, the reason why… I remember when they thought it was just a blip is because it was so vastly outside the norm. I mean the standard ring gauge… Your average, ordinary cigar smoker, the standard ring gauge was anywhere between 32 to 47 — and 47, at one time, was considered jumbo. That’s the size of a Churchill. You get in Double Corona size; you’re looking at a 49 ring gauge. I happen to love big-ring-gauge cigars, because I love… I don’t like these thin little things that make you feel like you’re drinking soup. You know, if you’re gonna smoke a cigar, smoke a cigar. You need to put it in your mouth and you need to be substantial. The bigger-ring gauge, the better.

RUSH: But they’re really hard to make. They are extremely hard to make quality ones. You start rolling a cigar that thick, maintaining a proper draw and avoiding plugs, it takes somebody that really knows what they’re doing. And I think that’s why they thought that it was only gonna be a blip, because I don’t think they thought at the time that they’d be able to mass produce enough of ’em to satisfy the kind of demand that existed. But obviously that was incorrect. People like them.

CALLER: I remember if you were smoking a 54 ring gauge cigar back in my days you kind of looked like an idiot. That was almost too big for the standard then. You really stood out and people kind of pointed at you.

RUSH: Well, not for me, I have a big mouth, and so the big-ring gauge was not at all a foolish-looking thing. 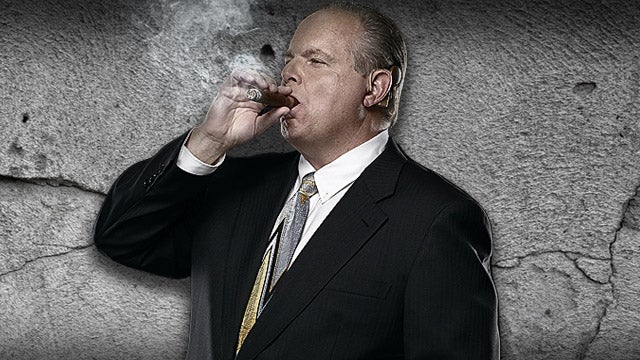 RUSH: But none of that matters! It shouldn’t matter what you the look like or what other people think. Do you like them? Do you like big-ring gauge? You obviously do.

CALLER: Asylum 80 ring gauge is one of my favorites right now.

RUSH: Well, what size is that?

RUSH: (chuckles) Well, then your mouth is wide open the whole time that cigar is in it. But it’s a maximized way of getting the flavor out of the cigar. I think if you like it, stick with it. Don’t worry what you look like or what other people think of it ’cause none of that matters.