RUSH: You want to hear something disgusting? The New York Times and the Associated Press have been unable to find out anything disqualifying about Brett Kavanaugh, Trump’s choice to replace Anthony Kennedy on the United States Supreme Court. Now, this is not a story about how not a single Democrat will sit down and talk to him. That is true. Not a single Democrat so far has agreed to sit down and have a conversation with Brett Kavanaugh. Now, this is tradition.

The president names a nominee, there’s always a senator appointed to shepherd the nominee through the meeting-the-senators process, and the nominee is escorted to various senators’ offices where they sit down and chat, which is basically the senator telling the nominee what he better not do if he wants his vote. The nominee says, “Yes, sir. Yes, sir. Three bags full. I respect you, Senator. You’re wonderful,” and then he goes on to the next senator and repeats the process. 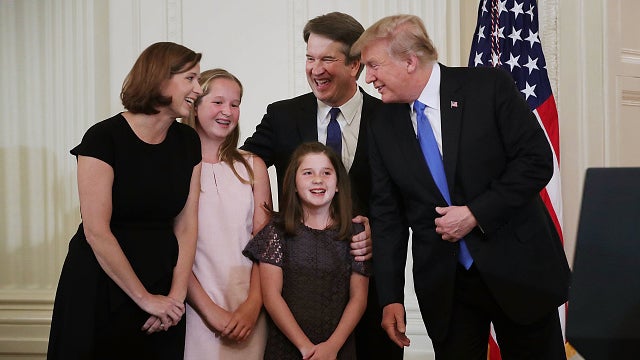 The Democrats are refusing to meet with Kavanaugh, and the reason they’re refusing to meet with Kavanaugh is because they must demonstrate to their lunatic fringe base resistance. This news was not supposed to leak out, but it has, and of course it doesn’t look good to these people. It makes them look close-minded, not open to the process. But they can’t find anything on Kavanaugh himself, despite the million pages.

Despise the hundreds of thousands of pages of written material, they can’t find anything disqualifying. So… (interruption) Manchin has met…? Okay. I stand corrected. (interruption) Oh, he’s gonna meet…? Manchin is gonna meet with him? (interruption) So, I’m technically correct. No Democrat has yet met with Kavanaugh. (interruption) Okay, so then don’t correct me! I mean, right, sitting here today.

If I’d have said this on Monday, I’d be wrong. But I’m not wrong. I’m right. Manchin is gonna meet with him on Monday — unless they get to Manchin. No, so what the New York Times and the AP are doing is targeting Kavanaugh’s wife. “The New York Times and Associated Press are going after … Brett Kavanaugh, by targeting his wife as the left-leaning publications look to learn more about her political views.

Now, this is just flat-out disgusting, and it’s precedent setting. Do you think they went after the partner of Sotomayor? Did they go after Stephen Breyer’s wife? Did they go after the husband of Ruth “Buzzi” Ginsburg? No way — and if the Republicans had done that, can you imagine? There’s just no other way to describe this but purely disgusting. It is disgusting and desperate, because they don’t have anything on the nominee. So it’s obvious what they’re gonna try to do here. They’re gonna try to find emails where this woman has a view of abortion that the New York Times would disagree with — or gay or gun — and then they’re gonna ask Kavanaugh:

“Uh, we have discovered that your wife is very much against abortion, very much against Planned Parenthood. Do you agree with her?” Now, they know he’s not gonna answer. That’s not the purpose. The purpose here is to create an illusion. This is the offshoot of the old Democrat adage that the evidence is irrelevant; it’s the seriousness of the charge that matters. So what they obviously want to do is try to find information that will allow them to make the charge that Kavanaugh’s family is anti-gay, anti-abortion, because they found it in his wife’s emails.

They know he’ll never answer questions, and he won’t have to. They don’t care. They want to be able to write the story. They’re looking for anything that might make Susan Collins and Murkowski, Lisa Murkowski to change their thinking on Kavanaugh. That’s what they’re trying to do. This whole thing is targeting… Well, actually more than that, because there are at least three red state senators that as of now, it is thought, will vote for Kavanaugh.

Have you ever heard of anything as disgusting as this? You know, I tried to think of things when I see stories like this… Well, let’s not do it that way. Let’s stick with the Kavanaughs. Can you imagine her? Her husband’s been nominated. They know going in what that means for him. But now all of a sudden her past, her life is gonna be turned upside down. Yeah, you figure she signed up for it, figure she knew it. But it…

Folks, I’m telling you. Behind closed doors, it’s never as copacetic and peaceful as you think it might be. You think people in this sphere of life are used to this and are prepared for it and it rolls off their back because it’s just the rules of the game, but I’m telling you it’s not that way. It doesn’t happen that way. This is designed to cause acrimony between Kavanaugh and his wife. It’s designed to cause and put pressure points and stress.

It’s designed to make her not want any part of this. It’s designed to make her get mad at him. “Look what you’ve dragged me into! I didn’t sign up for this when we got married. It’s none of their business what I did here and what I’ve written in my emails,” and then he has to talk her down. If this happened! This is what they’re trying to create. I’m not predicting that this is the result within their marriage. I’m just telling you this is what Drive-Bys are trying to create here.

They’re all about dividing people. They’re all about driving wedges between people, including married couples. But this is how desperate they are. I telling you, when news of this gets out, you can throw this on the pile of stuff that’s gonna end up backfiring on these people like they can’t even imagine. They think they’re off in a new area. “This is a brilliant tack,” they’re probably thinking. “We can’t find any dirt on Kavanaugh, but his wife’s certainly got some information we can use to sully both of them.” They have no idea how it’s gonna backfire. You just wait.

This is what Chuck said. Chuck said, “My wife’s job is independent of mine. The fact that she works with Bernie Sanders has nothing to do with the way I do my job at NBC. And I’m offended that you would try to link my wife to my job. The two have nothing in common.” And yet here they are trying to find out dirt on Brett Kavanaugh’s wife to link her to him. It’s just disgusting. People are just disgusting on a daily basis.