RUSH:  Bloomberg just ran a story. This is… (laughing) Let me just read you the headline: “Putin’s Soccer Ball for Trump Had Transmitter Chip, Logo Indicates.”  Remember when Putin gave Trump the soccer ball and people started saying, “I wonder if that thing’s bugged?”  Well, now, Bloomberg has a story saying that it was, that Putin gave Trump a bugged soccer ball.  They found the transmitter chip in the logo that is on the soccer ball.  Now, is this childish or what? I mean, this is getting into just kid stuff games now.  If Putin actually bugged (laughing) a soccer ball that he gave to Trump, then he’s trolling Trump. 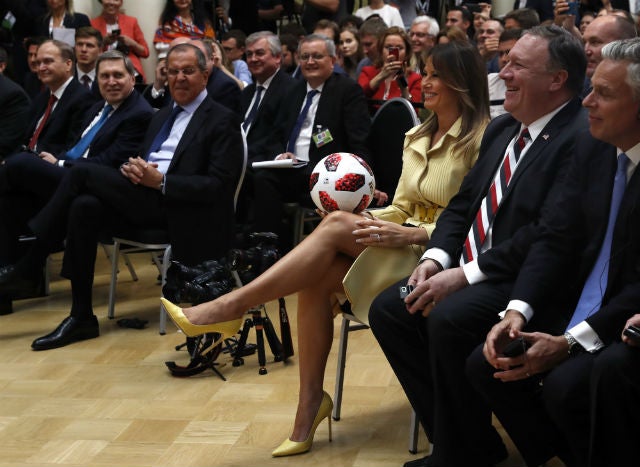 There’s no way that that is a… I mean, it may be a serious bug, but this is just Putin and the Russians trolling maybe just the media. I don’t know.  But the idea that it got into a story, like Bloomberg thinks this is the biggest deal! “Putin bugged the soccer ball that he gave Trump!”  Why would Putin bug anything that he gave Trump?  I thought Trump was one of Putin’s allies.

RUSH: Now, let me correct something. I had a chance to read more of the story on the bugged soccer ball, and it’s not a spy device. The chip that is in the soccer ball that Putin gave Trump is an advertised feature of the ball. The ball is made by Adidas and it allows fans to access player videos and competitions and other content by bringing their mobile devices close to the ball. So it’s an experimental thing.

The NFL has talked about putting a chip in the football to help determine when the ball crosses the goal line or when there was a first down made or not made, did the ball touch the ground on an attempted pass, that kind of thing. It hasn’t gone anywhere, but they continue to test it, to look at it. But that’s what this is. Putin did not bug a soccer ball to spy on anybody. But that was the original report. That was the original thing that they wanted to look at.