RUSH: This last week that Trump had — and, you know, it’s hard to categorize one week as worse than any other.

But last week we would have to say… Because the left melted down. The media melted down. There was hysteria. There was lunacy and insanity. So what happened? Folks, the Drive-By Media today is apoplectic. The Drive-By Media is beside itself and confused. I mean, royally confused. Because you know what happened? Trump’s popularity and his approval numbers went up! All during the week, Trump’s popularity numbers in the NBC/Wall Street Journal poll went up! That’s not supposed to happen! 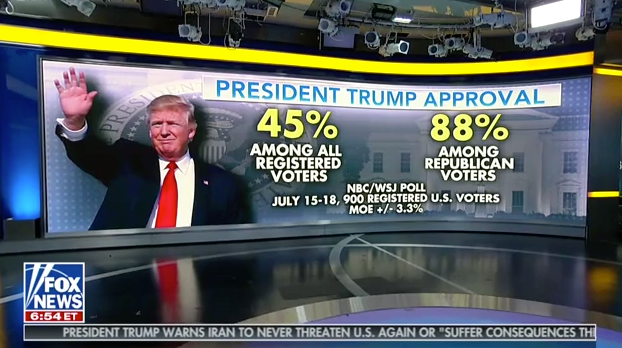 They thought that’d be the easiest find in the world. They can’t find anybody like that. They’re literally going insane over at MSNBC and CNN. They literally are. The news from The Wall Street Journal/NBC poll: “Trump’s Approval Climbs Despite Russia Hype — President Donald Trump yielded a 45% approval rating in the latest joint Wall Street Journal/NBC News poll carried out between July 15th and 18th.

“His approval is up one-percentage point from June and is at its highest point relative to previous polls of presidential approval jointly conducted by the Wall Street Journal and NBC News.” In other words, it’s the highest it’s been in this poll. “Trump enjoys support from 88% of surveyed Republicans.” The Republicans in Washington don’t understand this. The elected Republicans in Washington were counting on Trump’s last week being the beginning of the end.

Because the objective from the get-go has been to drive Trump’s numbers down lower and lower and lower, to the point that he had no public support to count on. It isn’t happening. Yes, even elected Republicans in Washington were shocked and saddened to see 88% of Republicans enjoy and promote and support Donald Trump. Wall Street Journal, quote: “Of the four previous White House occupants, only George W. Bush, in the aftermath of the Sept. 11, 2001, terrorist attacks, had a higher approval rating within his own party at the same point in his presidency,” and we know that didn’t last.

See what they were able to do? Bush was at 88% approval in his party after 9/11. Look what they were able to do inside the next six years. They were able to drive Bush down to the high twenties and lower thirties. Wall Street Journal concludes this: “President Donald Trump’s approval rating edged higher during a week in which he faced withering criticism following a summit with Russian President Vladimir Putin, signaling that he is positioned to weather the latest controversy sparked by his unusual brand of politics.”

The numbers keep ticking up.

One of the reasons is because all of this insanity is driving people to Trump.

RUSH: It’s not just the NBC/Wall Street Journal poll that shows Trump is ticking up. Folks, I’m convinced — and I have been for the longest time. Hillary, the Clinton campaign, the news media and the rest of the Democrats were convinced that charging Trump with colluding with the Russians would be all it would take. I mean, that was the first thing they got going out of this. That’s why the Steele dossier… The reason I think that they didn’t worry about it being what it was ’cause they didn’t think it would drag out nearly this long.

They didn’t think these texts between Strzok Smirk and Lisa Page would be discovered. Trump was gonna be dispatched in six months. Do not doubt me on this. I’ve heard this. I’ve had this explained to me by people in the know. But it’s common sense to me. They expected… Look, when have they not been able to get rid of any Republican they targeted? They have perfected it they can get rid of any Republican we wish.

In the case of George W. Bush, they didn’t actually get rid of him, but they paralyzed him. They froze his agenda; they destroyed his reputation. They are accustomed to success. They are used to being able to do this. I don’t think they ever respected Trump even after he won. I think they continue to think of Trump as the rube, the boob, the ogre that they’ve always thought, and therefore thought it would be easy just accuse Trump of colluding, accuse Trump of cheating, alleging the election was not fair.

They thought Trump supporters would abandon him within six months. The reason is they have never understood the bond Trump supporters have with Trump. You know, I have mentioned this I don’t know how many times. They have yet to try to understand it. If you’re in the business of getting votes while there are still elections, wouldn’t you think it would matter? But they seem not interested in this at all. I think with every one of these faux scandals, they thought they would have gotten rid of Trump by now.

RUSH: And there’s one more little bit of polling data here. Two-thirds of Republicans — that’d be 66% — gave President Trump high marks for how he handled Putin in Helsinki last week. Now, this is an ABC News/Washington Post poll. It says here, “although 50% of Americans overall disagree with Trump’s handling of Putin, 33% approve. Eighteen have no opinion at all. Sixty-seven percent of Republicans approve of Trump’s handling of Putin.”

They can’t believe this, folks. I know that I have mentioned this a few times, but it bears repeating. If you want to understand their behavior, which I think is crucial in defeating them, they thought they would have Trump gone long ago. They thought they would be back in power, which is what they are livid about, that they have lost power, they can’t get it back.

Despite being in the deep state, despite this, Trump still holds the power that they seek, that they consider theirs almost as an entitlement. And they are beside themselves. When they see numbers like this, like Trump’s approval numbers ticking up after all that they fired at him last week — and, believe me, the reason they’re upset is not because Trump’s numbers went up in connection with how he performed last week. They’re upset that Trump’s numbers went up despite all that they threw at him. That’s what they can’t believe.

They are close to being at their wits’ end. And now with 66% of Republicans, that is not separating Trump from his base. And this one has really thrown them for loops in a lot of places. Now, here’s what you need to remember to keep all of this in perspective. For the last at least 30 years — and it may even be longer if you want to throw Richard Nixon in the mix here — the left, the Democrats, the media, that group of people have been able to get rid of or shut up any conservative Republican they were afraid of.

There have been — I can’t think of very many exceptions. Reagan was one. But they have been pretty much at will been able to do great damage in terms of reputation, effectiveness on any conservative Republican they are threatened by. And, believe me, that’s why they do it. They will always tell us who they’re afraid of. It’s the people they hate the most.

You know, and all it took was a few well-timed and well-coordinated stories about a past indiscretion or an ill-worded interview or some titillating rumor of past behavior and the Republican would then resign and fade meekly into the sunset, asking to be forgiven, asking to be forgiven for making such a transgression against the state. And seeking to be readmitted after the passage of enough time. The point is they just went away. They didn’t try to fight it. It was hopeless. Nobody rallied to their defense. This is key too. Whenever these Republicans or conservatives were targeted, the rest of the conservative movement breathed a sigh of relief that it wasn’t them.

There was nobody circling the wagons except in many cases this program. But for the most part there was no defense. And so the left — can’t blame ’em — concluded that it was easy, easy to get rid of a conservative or a Republican that you didn’t like or that you were threatened by. The Republicans, slash, conservatives collectively would cower in the corner and say, “Yeah, we’re sorry, we’re sorry,” or they would mount some feeble defense but not actually fight what was going on.

Donald Trump refuses to be defined by these people. He refuses to let them characterize him. He simply refuses to. He fights back with aggression. He almost has an aggressive defense as his posture. And they are not used to pushback. The media, the left, they don’t get any pushback from Republicans. They get meek acquiescence and a fading into the sunset.

They called Trump and his supporters every horrible name they could think of! And what has dropped are the ratings of leftist media. The readership of leftist publications, newspapers and magazines, the ratings of leftist cable news outlets plummeting. CNN is even lower than HGTV and the Food Network. While their ratings drop, while fewer and fewer people tune in and watch, they see Trump’s polling numbers holding steady or growing! And I’m telling you, they can’t rationalize that. They can’t reconcile it.

Remember, it’s important to remember these people are used to being able to destroy whoever they seek to destroy. They’re asking themselves, “What’s going on? Republicans always give up before this point. This point Republicans always cave. Conservatives always fade away. Conservatives always get out of the way. Why isn’t Trump?” And as Trump hangs in and aggressively defends himself and attacks them, they get even more hysterical by the day. 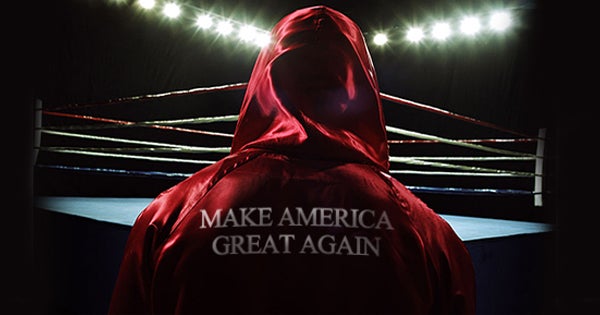 And then they see the American people’s support for Trump expanding and tightening up. They see fewer and fewer people blaming Trump for the things — and they are worried that the action they have advocated is gonna come back and hurt them, and it will because it already is. Urging this kind of behavior against the popular president.

No matter what you want to say, Trump is popular. His approval numbers are high enough to say he’s popular. There’s urging this kind of activity, threatening violence, intimidating people, running ’em out of restaurants. They think that is how they are going to rally the nation to their cause?

And to this day they still haven’t taken the first step to try to understand who Trump’s supporters are and why they support Trump. They don’t even understand that it isn’t Trump, that Trump is simply the vessel for what it is these people have cared about for a long time. Don’t misunderstand. They love Trump. They like Trump. But Trump tapped into it. This is not a criticism of Trump. Don’t tell anybody. 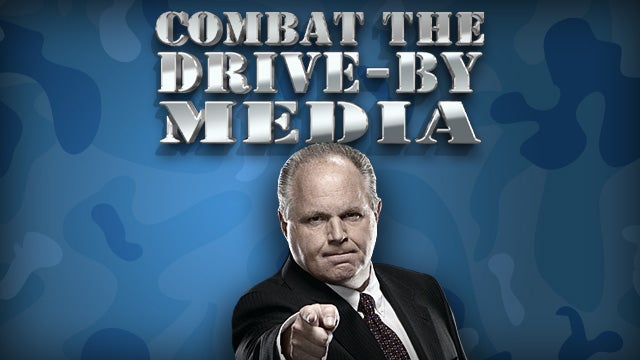 Folks, again, you’re not supposed to say this stuff. Don’t call other shows with this, ’cause it’s best that they don’t figure this out. I don’t think we have to worry about that. They don’t even seem curious to figure it out. So the economy keeps booming, and people get hired, and they’re earning more. And the level of contentment in America’s at an all-time high. The level of people that think the country’s going in the right direction’s an all-time high.

They never saw these numbers when Barack Hussein O was president. It’s driving them nuts. You can see it. You can see it codified in that unhinged behavior of Whoopi Goldberg to Jeanine Pirro, Judge Jeanine. It happened on The View set last week.

I have to take a break here. When we come back, I want to get to the audio sound bites because somebody finally has picked up on my long-range prediction that the left is going to someday figure out the only thing standing in their way really is elections.