“A Liberal’s Case for Brett Kavanaugh.” I mentioned this at the top of the program, but I want to run through this very quick. There is a leftist professor of law from Yale who has written an op-ed piece in the New York Times today. His name is Akhil Reed Amar and the New York Times has given him space to run an op-ed titled “A Liberal’s Case for Brett Kavanaugh.” This is how it begins.

“The nomination of Judge Brett Kavanaugh to be the next Supreme Court justice is President Trump’s finest hour, his classiest move. Last week the president promised to select ‘someone with impeccable credentials, great intellect, unbiased judgment, and deep reverence for the laws and Constitution of the United States.’ In picking Judge Kavanaugh, he has done just that.

“In 2016, I strongly supported Hillary Clinton for president as well as President Barack Obama’s nominee for the Supreme Court, Judge Merrick Garland. But today –” blah, blah, blah, blah, blah. So he goes on and he praises Kavanaugh’s intellect. He admits that he taught Kavanaugh at Yale. And he says that Kavanaugh’s gonna be confirmed. There isn’t any question about it.

He said there’s no way Brett Kavanaugh’s not gonna be confirmed, no matter what the Democrats do, they’re not gonna be able to stop this. But he’s got an idea, since that is a given. He has a solution. He proposes a solution to bring everybody together. What he wants to do, his idea, “I propose that the Democrats offer the following compromise: Each Senate Democrat will pledge either to vote yes for Judge Kavanaugh’s confirmation — or, if voting no, to first publicly name at least two clearly better candidates whom a Republican president might realistically have nominated instead.”

And he says that’s not gonna be easy to do because there isn’t anybody better than Kavanaugh. “In exchange for this act of good will, Democrats will insist that Judge Kavanaugh answer all fair questions at his confirmation hearing.” So the idea is this, as proposed by the liberal law professor at Yale. Every Democrat senator must promise in advance, before the hearings, that he will vote for Kavanaugh, he or she will vote for Kavanaugh.

In exchange, Kavanaugh’s gotta answer everything, every, quote, unquote, fair question. And in the process, the Democrats will get a fair airing of their grievances and problems and Kavanaugh’s reaction, in exchange for Kavanaugh being preconfirmed for the Supreme Court with these Democrats pledging the votes before the hearings.

Mr. Snerdley, can you spot the flaw in this idea? Can you spot the trap in this idea? If there is one. Am I wrong? Well, not “reasonable.” “Fair.” And “fair” is an even bigger trap. Fair question. Who gets to determine what’s a fair question or not? “Judge Kavanaugh, have you ever thought about committing murder? Hey, it’s a fair question. The guy is a conservative, and I know they don’t care as much about it.” Who gets to decide what’s fair and what isn’t in terms of the question?

But that’s not the trap. That’s not the trap. I don’t even know if the guy’s proposing a trap. I’m just assuming it’s a trap because — I mean, he’s extolling the virtues of Kavanaugh, he’s claiming there’s no way to stop Kavanaugh, so why would this guy propose the Democrats pledge in advance to vote for the guy in exchange for getting their hands all over him. They get to question him about anything, and how is this supposed to help the Democrats? 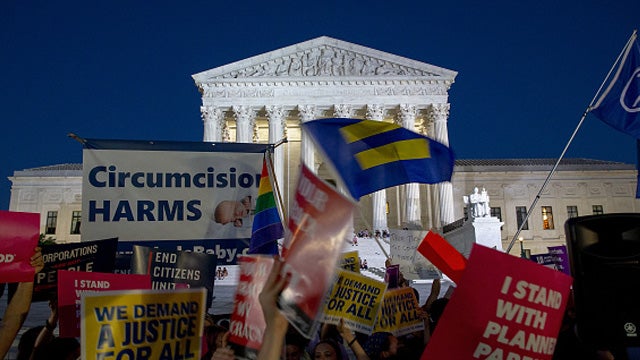 Each Senate Democrat will pledge to either vote “yes” for Kavanaugh, or, if voting “no,” they gotta name somebody better. “In exchange for this act of good will, Democrats will insist that Judge Kavanaugh answer all fair questions at his confirmation hearing. Fair questions would include inquiries not just about Judge Kavanaugh’s past writings and activities but also about how he believes various past notable judicial cases (such as Roe v. Wade) should have been decided.”

Now, it has been ever since Ruth “Buzzi” Ginsburg first said in her own confirmation hearings, “I’m not gonna answer any question about a specific case,” screw you, Senator, not a single case, not a single question, That has been standard operating procedure ever since. “Senator, I can’t tell you the answer to that question. That case may come before me as a justice on the Supreme Court. I cannot be sitting here prejudging. So I’m not.” So that’s the de rigueur.

This would require Kavanaugh to answer specific and — do you still not get the trap in there? (interruption) That’s exactly right! If all it is is a pledge, but they can ask the guy anything, including specific cases, all it’s gonna take is one outraged senator, “My God. I had no idea he thought that. To hell with my pledge. I’m not voting for this guy,” and that’s it. And that’s how you destroy it. This guy, the law professor at Yale has got to know people are gonna figure that out. What’s the point of this?