RUSH: I know we have a lot of people in the audience here who were not adults and paying attention to things in 1987. So I want to take you back to the moment in time where all of this with the Supreme Court began. The current kerfuffle, all of the controversy and the hysteria. We owe it all to Senator Kennedy. Ronaldus Magnus nominated a brilliant mind, Robert Bork. He was an appellate judge. He was impeccable. But he was a strict constructionist, meaning that he believed in finding the original intent of the founders of the country when determining the constitutionality of anything. 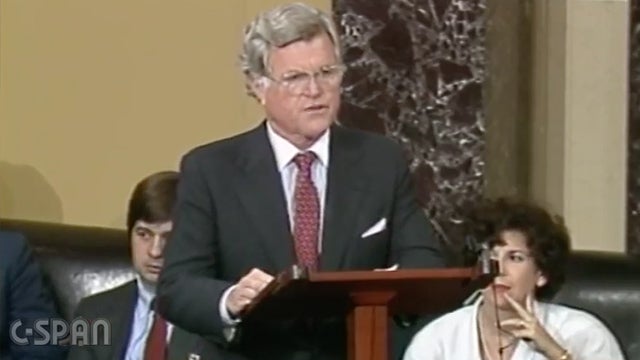 This is Ted Kennedy on the floor of the Senate June 23, 1987, after Bork was nominated by Ronaldus Magnus…

KENNEDY: Robert Bork’s America is a land in which women would be forced into back alley abortions, blacks would sit at segregated lunch counters, rogue police could break down citizens’ doors in midnight raids, and schoolchildren could not be taught about evolution. Writers and artists would be censured at the whim of government. And the doors of the federal courts would be shut on the fingers of millions of citizens for whom the judiciary is and is often the only protector of the individual rights that are the heart of our democracy.

RUSH: I mean, character assassination, defamation, you name it. But because it was in politics, Senator Kennedy could say whatever he wanted. Robert Bork went on to be defeated. Sadly, nobody in the Reagan team really took this seriously. Everybody was outraged by it, but didn’t think it would matter. But it did. After Bork came Ginsburg, his replacement. He didn’t make it. They discovered, I think, he was smoking weed now and then. That’s how we got Justice Kennedy. But this is where it started.

This is where all of this began, with the Democrats and Ted Kennedy — and it started a new trend of reacting to Supreme Court nominations in this regard.