RUSH: We got a little news here about the Democrat/socialist/Marxist Alexandria Ocasio-Cortez, who upset the white-privileged dinosaur of the Democrat Party, Joe Crowley. The headline here… It’s from The Daily Caller, which is Chatsworth Osborne Jr.’s website. He’s now recused himself from it, by the way. That’s Tucker Carlson. It’s our affectionate name for him. Chatsworth Osborne Jr. from Dobie Gillis, a show from way, way back. It’s a great website, by the way. But Tucker decided to recuse himself while he’s host the 8 p.m. show on Fox.

Headline: “Socialist Darling Caught Celebrating, Campaigning with Known Anti-Semite and Racist — Democratic socialist Alexandria Ocasio-Cortez stunned the political world and rank-in-file Democrats by defeating incumbent [white-privileged dinosaur] Joe Crowley in Tuesday’s New York primary. … One of Ocasio-Cortez’s most enthusiastic campaigners and a man who stood behind her at her victory party,” which is where every man should be now: Behind a woman. And believe me, folks: The woman’s movement from behind? (Snap!) You love it. 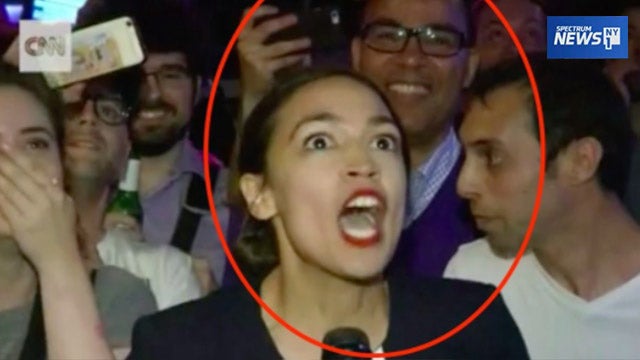 “Just this month[,] Lopez-Pierre tweeted about ‘Greedy Jewish landlords.’ Lopez-Pierre also has tweeted about threatening white people and Jewish people with violence.” Now, this ought to go over big in Queens, don’t you think? (laughing) They’ve gotta eat this up in Queens! “On [his] YouTube channel, Lopez-Pierre” who is a No. 1 supporter of Alexandria Ocasio-Cortez “can be seen campaigning for Ocasio-Cortez. In a recent video, he is wearing a[n] Ocasio-Cortez campaign shirt and declaring that he is campaigning against ‘greedy landlords.’ 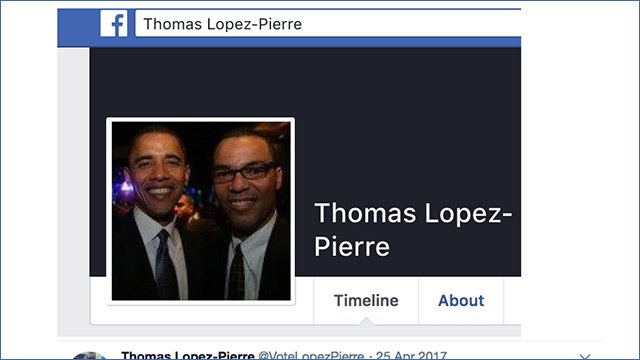 “The caption on the video reads: ‘Thomas Lopez-Pierre campaigning in the Bronx for Democratic Congressional Pro-Tenant Candidate (2018): Alexandria Ocasio-Cortez…’ Lopez-Pierre also posted a video of him smiling at Ocasio-Cortez’s victory party as the candidate gives a speech about inclusion and tolerance.” He’s talking about “greedy, Jewish landlords. … In 2013 while running for city council, Lopez-Pierre sent a racist, homophobic email to a black supporter of his opponent, Mark Levine.

“The supporter, named Brain Benjamin…” Maybe that Brian and this is just a typo, but we’ll go with what it says here. The supporter, named Brain Benjamin, was called [the N-word] five times, a ‘[B-i-itch]’ six times and saying he is a ‘weak, little short man who…'” Well, I can’t repeat this. Stephen Colbert would, but not me. But he does very bad things with white, Jewish genitalia. “Lopez-Pierre also threatened Benjamin with violence.”

This is one of this babe’s No. 1 supporters.

Let’s just see. Now, this in the Daily Caller. It hasn’t been in the New York Times or anywhere else. Let’s just see if something happens.

RUSH: Well, it turns out that Alexandria Ocasio-Cortez has indeed denounced this wacko, Thomas Lopez-Pierre. Now, this guy Mark Levine — the New York councilman who defeated the anti-Semite, Thomas Lopez-Pierre — tweeted that this guy Lopez-Pierre has been showing up unwanted in campaigns for years, frequently jumps into pictures with people who don’t know who he is. Let’s give Ocasio-Cortez a chance to denounce him and his brazen anti-Semitism before jumping to conclusions.

Right on schedule, here comes Alexandria Ocasio-Cortez, “Thank you for this opportunity and your graciousness here. I have no idea who this guy is. Hundreds of people walked into the hall open to the public last night. I absolutely denounce any such bigoted and reprehensible statements.” (crumbling up paper) So bye-bye, Lopez-Pierre, at least publicly.