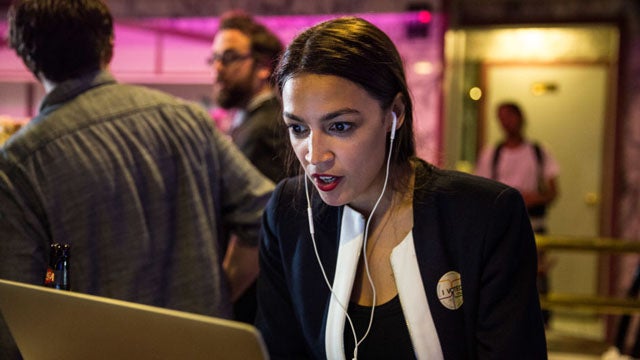 Anthony Kennedy has announced he is retiring from the Supreme Court and the Drive-By Media has gone absolutely nuts! It was predictable. He even alluded to this a year ago. There shouldn’t be any surprise that Justice Kennedy is retiring. The tea leaves have been out there, as I say, not least because he has seen to it that it was alluded to.

Donald Trump is going to nominate a replacement. The Democrat Party is going to have a total, 1,000 percent breakdown after he does it. I wouldn’t be surprised if riots and mob activity happen over the course of the summer or whenever it is after Trump names the replacement. They have just found themselves on the losing end of three seminal 5-4 decisions.

Anthony Kennedy is their justice. They count on Kennedy. Kennedy has gotten all the Washington Post’s Style section puff pieces. Anthony Kennedy is the guy they counted on to vote with them on their cultural upheaval issues, such as gay marriage, transgender bathrooms, that kind of thing, and for the most part, Kennedy was there in the latter stages of his career. He was called “the swing vote” on the court. The way the Drive-Bys and everybody else looks at this, you got four conservatives over there, and you got four liberals, and then Kennedy. And Kennedy would go either way, depending. 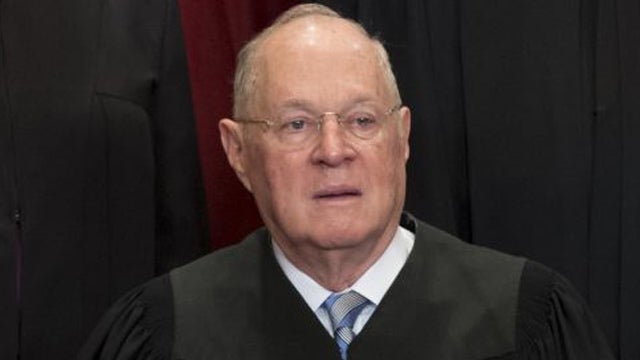 Well, Trump probably is gonna not nominate a centrist or a floater. Donald Trump is gonna take advantage of the opportunity to nominate another Neil Gorsuch or as close to it as he can get. He will be heavily advised by the brilliant people at The Federalist society, which is also gonna cause the Democrats and the media to blow a gasket. You might really see heads explode here before the end of the day. And it’s gonna be panic. It’s going to be sheer panic.

These people are gonna have gone from a high of a couple of months ago to a blue wave, Robert Mueller indicting Trump and the Democrats impeaching him and Trump being sent packing, to this, three 5-4 decisions, including wiping out the Democrats’ union advantage in fundraising, and now replacing the swing vote with a reliable constitutionalist. Not that Kennedy isn’t, by the way.

Anthony Kennedy went to Washington the same year I left Sacramento. He was at McGeorge law school in Sacramento. He was the nominee for Bork, to replace Bork after — was it Bork or Ginsburg, oh, come on brain, don’t fail me now. Well, it was either Bork or Ginsburg, but when either one of those were rejected, it was Anthony Kennedy chosen to replace, and I got to know Judge Kennedy and some of his family for a while shortly before leaving Sacramento ’cause we left at the same time, same year, 1987.

He’s gonna be missed by the left, missed by everybody, but the left relied on this guy for their social justice stuff, and Trump’s nominee is not going to be a floater, as I say. And the fight over this — they’re gonna be bringing up Merrick Garland. They’re gonna say some of the most ridiculous things, Schumer and the Democrats are gonna be making some of the most ridiculous demands. And you just gotta stay focused and keep your head above this, folks. Because this is Trump’s appointment to make. And it is a golden opportunity, and I think it’s just the first of two.

You’re gonna hear positive things, too, but these people are already out of control. They’re already unhinged over things that are already happening. And this on the heels of these 5-4 decisions, they’re gonna be hoping and praying Mueller has something, anything, even if he has to make it up. So we’ll keep a sharp eye as it all unfolds.

RUSH: Here you go, folks, just a little reaction, gist the first of what’s gonna become a flood of this kind of stuff, a panicked Gloria Borger reacting to infobabe Brooke Baldwin upon hearing the news that Anthony Kennedy is retiring. 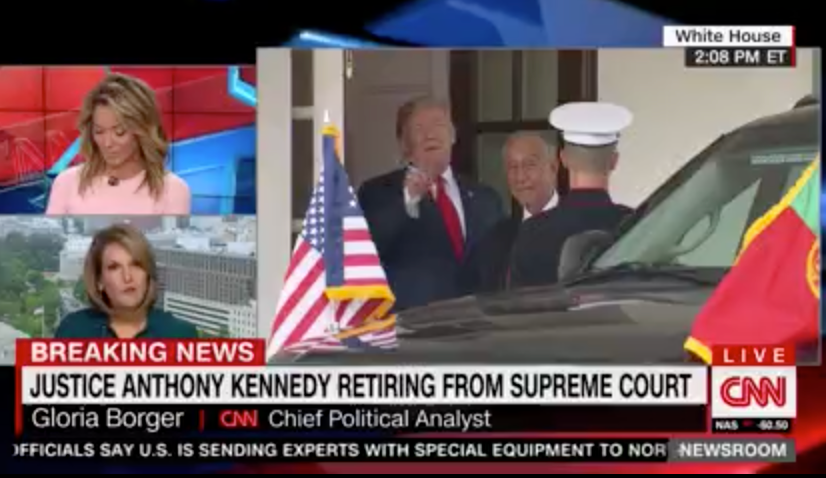 BORGER: This could potentially transform the court for generations. And ya know, when you think of Justice Kennedy, you do think of someone who’s a moderate. But his vote was crucial in a few areas. And let me just tick them off. Same-sex marriage, access to abortion and affirmative action. Okay, so those are three areas which he was a very key and deciding vote. And now with his retirement, of course, the President is going to get an opportunity to name another conservative to the bench.

BORGER: It will cause an uproar I can tell you on Capitol Hill. You’re heading in to the midterm elections here, Brooke. And so once again the Supreme Court will become a huge issue you for both Democrats and Republicans.

RUSH: That’s right. That’s why it’s bye-bye Alexandria Ocasio-Cortez for the time being. Folks, you gotta put yourself in their shoes. It’s fun to do this. In 2016 Hillary Clinton is going to win in a landslide. Barack Hussein O is leaving, and he’s the best president ever and they just love him, he’s the smartest, he’s the best spoken, he’s campaigning for Hillary, and he’s guaranteeing that his agenda will continue because Hillary’s gonna win. And it’s even better cause Trump is the Republican nominee, he can’t possibly win, it’s a slam dunk, oh, man, it was orgasm time for the future.

And then it all unraveled about 9 o’clock on election night, and nothing has been the same since. And then for the next year and a half, the Democrats plotted and planned and prayed and convinced themselves that Trump would be gone inside of a few months, and when those months went by and Trump wasn’t gone they then convinced themselves that Trump was gonna blow up and get gone himself, nothing was gonna happen, gonna stop him, the media were gonna separate from his voters.

RUSH: I’m gonna tell you what’s gonna happen. I’m almost so confident of this that you can make book on it, and it may have already happened. I can’t… The situation is a little bit different. It’s tougher to follow what’s on the monitors just ’cause we’re in a different place. It’s not an excuse. Just saying if it’s happened… Everything’s fine, nothing’s wrong, just different. I think you can make book on the fact that the Democrats and the Drive-Bys are gonna argue that Trump cannot be permitted to nominate a Supreme Court justice until we hear from Bob Mueller. 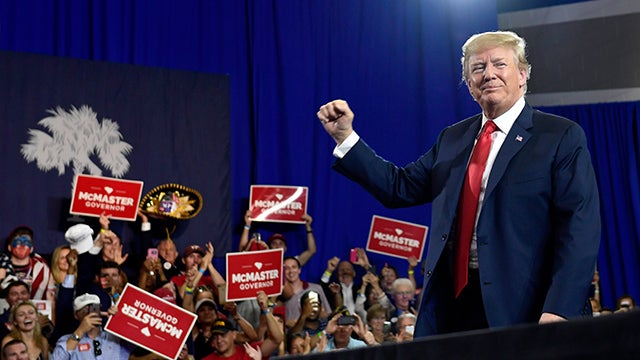 “Until Trump is cleared of all wrongdoing, he should not be permitted to name a Supreme Court justice, because it is entirely possible,” they will say, “that Trump is going to be indicted for colluding with Putin to steal the election from Hillary, making any Supreme Court nomination illegitimate and illegal.” Make book on it. Some variation of that is going to be stated, is going to be uttered by somebody out there on the left. And as I say, they may have already done it. But if they haven’t, it’s gonna happen before the end of the day, and they’ll try to find one of the most (they think) respected, reasonable, “pragmatic” Democrats.

It’ll not be shouted and pounded. (impression) “It will be very, very respectful and deeply, deeply, thoughtfully considered, uh, with the greatest reverence and respect for the Constitution and for the people of America. But we really need to think of it. Can we permit a lifetime appointment to the court by a man who may have stolen his election and may be found guilty of having done that? We must wait until the facts are known,” and then the next thing we’ll hear is that Mueller will not be able to finish by fall, and it may take another nine months for Mueller to wrap it up.

Do not put anything past these people.

RUSH: One other thing on the Supreme Court thing, and I don’t think anybody’s mentioned it so I’m gonna mention this prediction of mine again, that before today is out somebody somewhere is gonna say we need to hold off and not permit Trump to name a replacement until Trump is cleared of all allegations hanging over his head. “Trump — since he may be forced from office and may be found guilty of colluding or obstructing — should not be allowed to appoint the next justice of the court for a lifetime term until he’s cleared.

“And maybe not even then because he’s such a reprobate.” But they’re gonna do something. They’re not gonna sit idly by. Trump ought to name his replacement tonight. I mean, Trump’s out there saying, “We’re gonna start thinking about this immediately.” Don’t tell me they don’t have a list! They got a list. Trump ought to name the guy now and then demand hearings next week on Fourth of July. I’m, of course, exaggerating on that. You know, there’s another group of people we haven’t talked about today whose heads are also exploding, and that is the Never Trumpers on the Republican side. Whoa-ho!

Would you not love to be in a room with these clowns at whatever club they convene at to wring their hands in sorrow? (laughing) I mean, after the Supreme Court decisions and now Justice Kennedy retiring? Oh, this is the worst thing that could happen for the establishment crowd, folks! Somebody is gonna come up with some unique reason why Trump is not — at the present time — qualified to make a nomination. Of course the answer would be, “Well, he nominated Gorsuch and you didn’t say anything.”

“Well, that was early on! We were being deferential. But this is very, very serious. Mark Warner said that he and Mueller have been talking and they know some stuff that only they know and it could well be that Trump’s gonna be indicted. Do you want that guy naming…?” It’s gonna be something like this, folks, and it’s gonna infuriate you. (interruption) No, no. It can’t fly. That’s gonna be the fun of it. But they’re gonna do… The Democrats will do everything they can to stonewall this, wherever the appointment is made.

Oh, one other thing. All of these things like Sarah Sanders being thrown out of the restaurant and all of Trump’s officials being protested and harassed at dinner? I guarantee you, somebody is gonna say to these prospective Trump nominees, “Are you sure you want to do this? Do you want to accept this nomination and potentially be harassed the rest of your life with your family threatened?” Don’t doubt that, either, folks. I’m here to tell you. And these nominees, whoever Trump is thinking of nominating, they’re gonna get hit with this.

RUSH: So a reporter just asked Trump, “So are you gonna delay your Supreme Court nomination because it’s an election year?” And Trump said, “No. Fake news. Go away. That was a presidential election year where they said we should delay the nomination.” But they’re already working on angles to stop Trump from doing this.