Check Out the Women’s Wear in Our New Store! 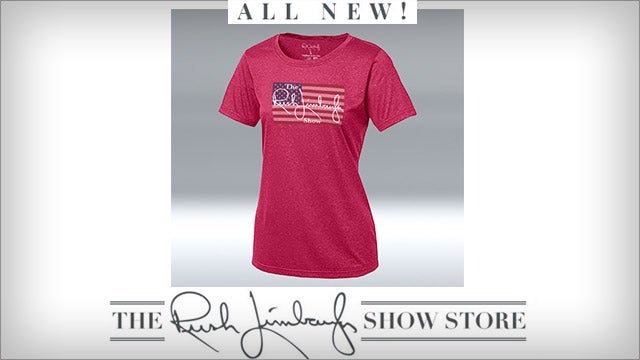 RUSH: I mean, there’s customized golf tees, and there’s some stuff to come. You know, we’re looking… I use a leather cigar case when I’m out on the golf course. We can’t find any at a decent price point, but we’re always looking for stuff. I was lobbying Kathryn. I said, “We got put some halter tops in there.” She said, “We will not.” I thought it’d be cool! You know, halter tops. “Rush Limbaugh Show: 30 Years” — in honor of — right across the front.

They’d have been dynamite. You never know. (interruption) “Where would we have room to write it?” We could put it on twice. Look at the logo on the golf shirts. It would fit twice on a halter top. Anyway, there’s any number of possibilities. But the stock in the store that’s there now? We’ve got a T-shirt that we’ve already sold out of, and we had plenty of quantity. But, anyway, to answer the question: Yes, lots of stuff for women at the new store at RushLimbaugh.com.