A Question on Incestuous Media (and Fax Modems)

RUSH: Bill in the Upper West Side, New York. Great to have you, sir. Welcome.

CALLER: Rush, it is a delight. I wanted to bounce off what you said about George Stephanopoulos in the first hour, and then I had a quick Apple, iMac question if you have time.

CALLER: Anyway, on TV we often see warnings as part of ads or like if they’re trying to sell you a new cell phone cell phone contract or a car loan, they’ll flash on the screen something about it that a consumer really has to know. And so I’m wondering, with the news business so incestuous with, you know, people who are on air married to politicians or relatives of politicians — you pointed out David Westin, who himself is a powerful person, but, as you know, Ben Rhodes has a brother who is the president of CBS.

CALLER: Ah. Well, you see, it’s very incestuous. David Gregory, who is now a CNN analyst, his wife is a high power Washington lawyer who helped represent Cheryl Mills, Hillary’s chief of staff, who knew a lot about Benghazi, and she knew a lot about destroying BlackBerrys. Anyways, my idea is that whenever one of these people is on TV, maybe even Martha Raddatz because she was married for a while to the head of Obama’s FCC, that there be a warning that just said this person is married to so-and-so who has this hand in the government or had —

RUSH: Well, the only place you might be able to pull that off is Fox News. The other networks are not gonna put, “Warning: You’re watching a corrupted individual on our network or individual show.” We used to do that on Rush Limbaugh the TV Show. Ask Mr. Snerdley your question and he’ll relay it to me.

RUSH: Our caller’s Apple question has to deal with fax modems. He claimed that starting in — well, he claimed with OS X Sierra, which would be 10.12, that USB fax modems were no longer used. I don’t know a thing about that. The way I fax out of my Mac — and I don’t do it much anymore because I don’t know anybody who does fax — but what you need to do is get a program called eFax and it works through email. You can receive somebody’s faxes through an eFax email address. It comes to you as an email. 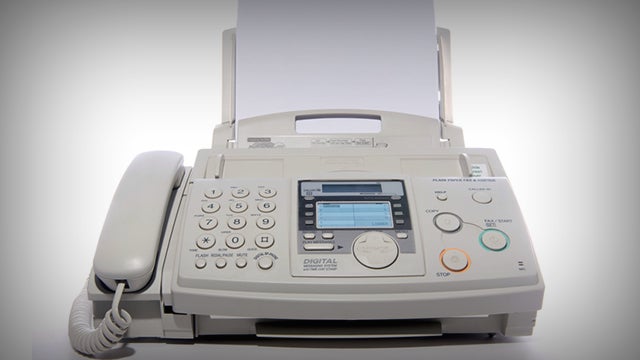 You send faxes from your email. You get the fax number of the person you want to fax to, use that number at efaxsend.com, it goes to their servers. They send the fax, your recipient receives a fax as though you’ve sent it, but you have sent it from your email. And you receive faxes in email, and you can choose to print them or not. I have used eFax for 10 to 15 years, if not more. But we have printers here that have fax machines built into them, and they work perfectly fine connected to our computer so I’m not really — maybe he had a little fax modem off to the side conducted via USB, but I’ve never done it that way. But you can still fax from a Mac OS easily. Investigate eFax.