RUSH: “CNN Poll: Democrats’ 2018 Advantage Is Nearly Gone” in the generic ballot. Back in December, the Democrats had a 15-point lead in the generic ballot. This is where pollsters ask, “In the next election, are you voting Republican or Democrat?” They don’t put names of candidates in, and they don’t ask about specific races. They just ask how people are gonna vote by party. 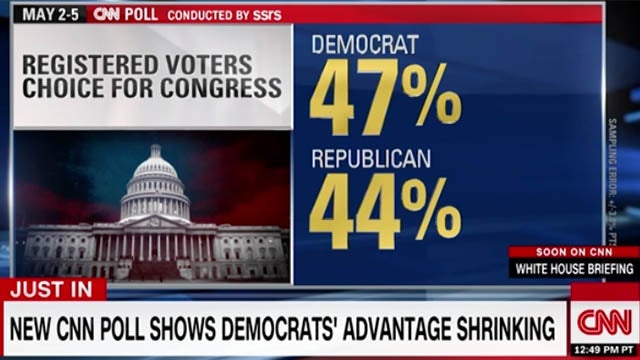 The Democrats had a 15-, 16-point lead in December. It’s now gone. In addition to that advantage having vanished, the poll also shows that 60% of the American people think the country’s on the right track. “[S]ix in 10 saying that things in the country are going well amid improving approval ratings for the President’s handling of major issues, including the economy, immigration and foreign trade. Trump’s overall approval rating, however, held steady at 41%, but when you ask about specific issues, he’s way, way up.

His approval numbers are climbing. In Rasmussen, he’s going back and forth 49 to 51. CNN, CBS it’s anywhere from 41 to 43, maybe 44, and he’s climbing. He’s gaining. They’re not talking it down. Ninety percent of the Trump news coverage is negative, it’s blasphemous, it’s slanderous, it’s libelous, it’s all of this stuff, it’s fake. I really think we’re in the midst of a lot of backlashes. I think there’s a backlash against the Mueller investigaton…

In fact, in fact… Oh, I hope did I print this out? The public polling data on the Mueller investigation — maybe it was from yesterday — it’s bad. More and more people now think the Mueller investigation is rotten to the core, not good, not working, they don’t think it’s good. (sigh) Oh, what did I do with that? Don’t doubt me. I don’t have the numbers in front of me, but — for some reason I think it was yesterday, and maybe it’s today when I printed it out.

But regardless, it’s not looking good. The Mueller investigation is losing its luster, is the bottom line throughout all of this polling data. The Stormy Daniels thing? That’s starting to dissipate. There’s no illegality there, and even Drive-By journalist lawyers and analysts are trying to talk Drive-By reporters off the ledge when they tell ’em, “There’s nothing illegal about any of this, and there’s no collusion here.”

So, my friends, it’s not just Millennial women who are losing interest in the Russia investigation; it’s the people at large across the fruited plain. In all of these areas listed or given by CNN where respondents are to rate their importance, the Russia investigation is near the bottom of the list. Now, I know some of you might say, “Rush, that’s not good. That’s not good. That means people aren’t paying attention and they could be set up for a giant shock or surprise.”

That’s not the way to look at it, ’cause the investigation’s it is not gone anywhere. It’s still is in the news 24/7! The Russia investigation has not gone dormant! That’s all the Drive-Bys are talking about — and it’s driving people away, is the point. People have had their fill of it! And the reason why: You can’t maintain your emotional reservoir this long without having it refilled, and there’s nothing. If there were something, it would have been leaked. They don’t have anything.