Drive-Bys Doubt Their Own Trump Polls

RUSH: Yesterday we had a Reuters/Ipsos poll that showed great, great news for Trump. It was incredible. It was 50% of independents like the guy. No, 20% of Democrats think Trump’s doing okay, 50% of swing vote independents, 80% Republicans. It was a great poll, and Reuters decides it’s not true. They’re calling it an outlier and they’re setting it aside. There are two more of these polls today, and one of them is from CBS. The other is from CNN, and both news organizations are expressing shock and surprise that Trump is doing so well. 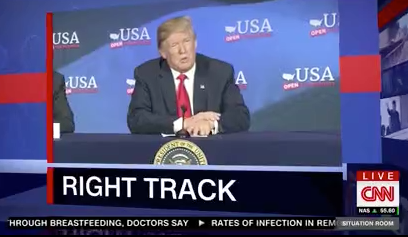 So we now have three polls — Reuters, CBS, CNN — and all three are suggesting, “That’s not quite what we think is the case out there.” So they’re reporting polls with caveats that it may be an outlier, meaning you have your averages and everything falls within the averages and then one poll’s way, way, way out of the averages. “No, no, no. That can’t be true.” So they’re setting it aside, and they’re waiting for further data analysis.

And if you couple these three polls with some of the general news information that we are getting and that we know, it is inescapable to conclude that things are looking up in terms of the American people, the perception of the country. Maybe anxiety levels are a little high according to a poll on that, but that’s dubious, ’cause I think Americans are constantly anxious. Most human beings are constantly anxious. To take a snapshot of it and say it’s tied to Trump is a bit nebulous.

But regardless, against all this talk of a blue wave and the Democrats sweeping the House and impeaching Trump, you got more Democrats coming out today saying, “Stop talking about impeachment.” Donna Brazile is the latest. We have additional support for Kanye West coming from the African-Americans community. We have Cynthia Nixon from, uh… What is it, Happy Sexual Housewives of Manhattan? What was the name of that show? (interruption) Sex and the City! What am I thinking, Happy Sexual Housewives?

Anyway, she’s running for governor of New York, and she’s suggesting that we need to let African-Americans take control of marijuana farms as a form of reparations. Let blacks get in on the weed business and call it reparations — and she’s serious!

RUSH: I mentioned these three outlier polls. We had one yesterday from Reuters/Ipsos. There’s a new CBS News poll this morning that shows Trump’s approval rating has inched up to 40%, the first time in a year in the CBS poll at 40%. 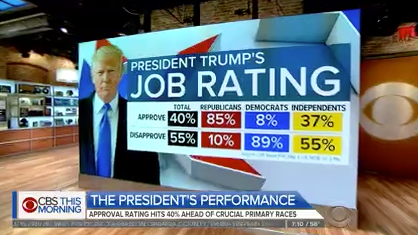 Fifty-five percent still disapprove. He’s rated at 51% on his handling of North Korea, 47% on the economy, 41% on relations with Israel, 40% each on immigration to trade. Now, I know that Rasmussen has Trump alternatively from 49 to 51. But even in these other polls, CBS — CNN’s the next one — Trump is trending up. This isn’t supposed to be happening. And so all of these networks are calling their polls potential outliers, since they are at great variance with what they think Trump’s approval numbers ought to be.

They think Trump hasn’t done anything to improve his relationship with the American people. Ninety percent of the television coverage of Donald Trump in the latest study is 90% negative. Ninety percent negative. And yet Trump’s numbers are moving up. These people — CBS, ABC, CBS, CNN — do not think this is possible. Not with this kind of coverage. So if they’re polling data is showing Trump gaining ground and improving his approval numbers, then it’s gotta be something wrong with the poll.

“CNN Poll: Trump Approval Steady Amid Rising Outlook for the Country — President Donald Trump’s approval rating is holding steady in a new CNN poll conducted by SSRS, but his numbers on handling several key issues are climbing, as almost 6 in 10 say things in the country are going well.” In the CNN poll, “41% approve of the president’s work, and 53% disapprove. … On the issues, however,” just like the CBS poll, “Trump’s numbers are climbing.

“Approval is up 4 points on the economy to 52%, the first time it’s topped 50% since March 2017; up 5 points on foreign trade to 43% approval; and his numbers on immigration have improved 4 points since February, with 40% now approving. On handling foreign affairs, Trump’s approval rating tops 40% for the first time since April of 2017…” Sixty percent say the country is doing well! I don’t care what else is in the poll, that does not augur well for a blue wave. I can take you back to the Clinton scandals, Monica Lewinsky, the Ken Starr special counsel investigation.

Clinton’s approval numbers were always between 55, maybe 55 and 60. The American people… It wasn’t that they were invested in Clinton. They just judged things were going okay. Everything was fine. Do not upset the applecart. We don’t need to get rid of the president. He’s not doing anything. And it’s slowly dawning on CNN, Reuters, CBS that the same set of circumstances may exist here for Trump. Now, let’s turn back to the Schneiderman story. Oh, Donna Brazile is warning Democrats not to focus on impeachment.

She’s just the latest to do so. So let’s circle back now to Schneiderman. Now, CNN is not even covering the story. In the time I noticed this morning when I arrived and was doing show prep, I was here for about four hours before the program started, they may have done a couple of stories that had five or 10 minutes, a little panel discussing things. But they didn’t spend any time on it. It certainly was not treated as breaking news, earth-shattering, stop-the-clock news or any of that. 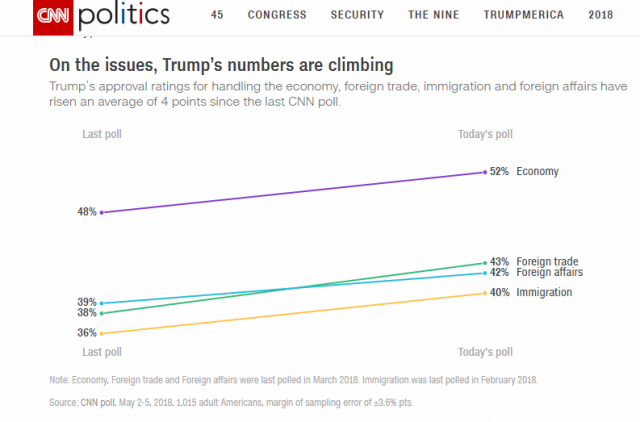 They just dutifully reported it and moved on, and what they can’t get off of is Don Blankenship in West Virginia. That’s all CNN is focused on today. So they’re ignoring Schneiderman. Well, let’s go to the some of this, because this is gonna matter. This is the media can try to ignore this all they want, but this kind of stuff, when it trickles out into the mainstream American population, it’s just another little thing added to all the others that while they’re out trying to tell everybody that Donald Trump is the reprobate.

That Donald Trump is unacceptable, that Donald Trump is unsophisticated, and he’s not worthy and so forth — every little bit of news about the left and the Democrats runs in direct opposition to their attempt to tell everybody they are cultural leaders, that their social justice warriors are on the cutting edge. And you learn and you find out that the reprobates and the sleaze and the human debris are alive and well on the left and getting away with it! Until they don’t. And in the process of getting away with it, people that otherwise would report them say, “No, no, no! We can’t report Mr. Schneiderman. He’s too important in getting rid of Trump.”