RUSH: Here we are, my friends, Open Line Friday, Rush Limbaugh behind the Golden EIB Microphone. Telephone number if you want to join us, 800-282-2882, and the email address, ElRushbo@eibnet.us.

In addition to feeling like I just saw Donald Trump go back up the escalator, I’m not feeling like anything that happened today was game changing. This seemed typical. This seemed much the same as we have become accustomed to in watching Washington function. And it doesn’t feel right.

For those of you worried about the spending side of this, don’t forget there’s an infrastructure something or other still to come down the pike, and that’s gonna cost some big money. But as I say, the spending as a standalone I always object to, but what bothers me that we keep losing because of this stupid ass government shutdown fear, and it has become an automatic for the Democrats to get what they want.

And in the process, in this particular budget, so much of Donald Trump’s agenda was stripped out, stripped away. I don’t know what that Homeland Security director was talking about with her increase in the budget and the wall, ’cause that’s not what I read. That’s not what I saw. Let me review what I think I saw when I looked at this.

There was a request to increase the number of ICE agents, and this budget rejects the increase in agents for immigrations and customs enforcement. Now, many of those agents that were requested were going to enforce work site. They were going to make sure that businesses were not hiring illegal immigrants. Now, this has nothing to do with the deportation side of ICE. ICE has got many divisions, but part of ICE that was going to administer work site enforcement, job placement enforcement, that number has been seriously cut.

And in this budget, the Democrats have ensured that while illegal aliens are gonna keep getting arrested, the American employers who profit off of them are gonna have less to worry about than they would have otherwise because there are going to be fewer people caught. In addition to that, after these people are arrested, there have to be detainment areas, and the omnibus budget bill pays for less detention space than is currently being used.

Look at it as the equivalent of closing some jails or closing some prisons. And the direct result of closing jails, closing prisons is there’s no place to detain people after they’re arrested, so what comes back to replace that is catch-and-release. This is not what Donald Trump campaigned to do. And Trump says he’s irritated but he’s never gonna go for anything like this again. And he warned ’em. He warned those Democrats, I’m not gonna ever do anything like this again.

Well, I don’t know. He may actually be right in a way we don’t want to contemplate. The request for added space to detain illegal aliens, folks, that is really important because of the continued number of unaccompanied minors and family units that are still streaming across the border. So essentially here, the Republican controlled House of Representatives and the Republican-controlled Senate has voted to continue catch-and-release. Just like with Obama. They were apprehended and then let go because we are reducing the space to detain them.

Sanctuary cities. Here we have cities that are openly flouting American law, they’re doing it with a smile on their face, and they’re undermining the very culture and morality and society and its cohesiveness that is required for this country to maintain its culture. And these sanctuary cities, there were measures in this — the administration wanted to reduce the amount of federal money these cities got, and that didn’t happen. Despite how unpopular sanctuary cities are, sanctuary cities funding continues.

Now, the wall. This is where I got confused with the Homeland Security secretary and her time at the microphone. Because the omnibus spending bill gets real specific on this. It provides money for 33 miles of fence on the Texas border. But get this. The money that is authorized for 33 miles of fence, it is specified that none of that fencing may resemble in any way the wall prototypes that Trump went and examined last week out in California and that the Border Patrol has been testing.

I don’t know if you ever saw a cross section or a blueprint, but some of these wall prototypes are actually very cool and amazingly innovative. They contain tunnels for drought relief. They even have solar panels on it, for crying out loud, as a sop to the environmentalist wackos. But none of that is gonna happen. None of that’s gonna happen because only 33 miles of fence in Texas, essentially, is being funded, and none of it may look like any of those wall prototypes.

But the bill does, if you really want irony, the omnibus spending bill provides money without any restrictions to the secretary of defense to enhance — I’m gonna read a quote to you from the bill! “To enhance the border security of nations adjacent to conflict areas, including Jordan, Lebanon, Egypt, and Tunisia.” In other words, we are in the omnibus going to spend on border security for nations in the Middle East, but not ourselves.

I want you to go back and grab audio sound bite No. 1. This is Dave Brat today. Trump said he’s never gonna do this again, gonna fix this the next time this comes around. Listen to Dave Brat who was on Fox Business this morning with Stuart Varney. Varney said, “You’re gonna say, Mr. President, veto this ’cause it’s just not good. Is this right?” 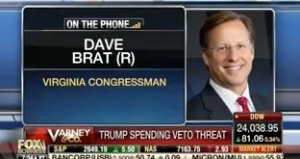 BRAT: This is the premier issue he ran on, and he’s getting nothing at the end of the year. And this is our big leverage moment, and the folks back home may not know, the Senate put in the last budget that they’re not even gonna do a budget next year. So no chance for wall funding, no chance to get the Goodlatte bill in. The major immigration piece of legislation in the House that addresses the DACA, brings the kids out of the shadows, but in exchange for rational policy going forward that the president believes in. So, yeah, he ought to end this thing until he gets something of what he asked for as president when we have the House and the Senate. It’s quite amazing.

RUSH: So I have to admit here I’m a little confused here because Paul Ryan has been running around offering as an excuse for this abomination “it’s only six months.” He said it yesterday, said it Wednesday, it’s only six months. And they’re trying to say this is good it’s six months. We’re not gonna have to deal with this next month or the next three weeks. So it’s good we got it locked in for six months.

Well, that means it’s the last piece of meaningful legislation before the election, which means this and whatever people’s memory of today is or what they think of it down the road is what they’re gonna be taking into the ballot box in November. This is the last thing of major mind shaping. But then — and I’m gonna have to track this down ’cause this still doesn’t honestly make sense. It confuses me. Brat says that people at home may not know the Senate put in the last budget that they’re not even gonna do a budget next year.

Okay. So I don’t know what the last budget is. Is the last budget the thing that happened before this omnibus? If it is, then what he said can’t be right. The Senate put in the last budget that they’re not even gonna do a budget next year. So in the continuing resolution that precedes this thing that Trump signed today, there’s an addendum that says that next year there won’t be a budget?

Well, this budget doesn’t even get us through the end of this year. This budget expires in six months or whatever this is, expires in six months. So what does this mean? That we have to live with this beyond six months? How can we do that if this thing has an expiration date? And it has an expiration date because this is only enough money to run the government for six months. So we’re gonna be right back here doing the same stuff, the same rigmarole all over again?

I don’t know what it means that the Senate put in the last budget that they’re not even gonna do a budget next year. What that has to mean is that we’re never gonna sit down and actually do a budget like we used to. We’re gonna just revert to funding measures, continuing resolutions of two weeks, of a month, three months, whatever we can end up negotiating. And I guess what he means is that we are now perpetually tied to the next government shutdown.