RUSH: Good guy with a gun opened fire at a Maryland high school shooter and ended the threat. Now, don’t anybody tell David Hogg or any of the students down at the school in Parkland, ’cause this is not what anybody wants to hear.

St. Mary’s County sheriff’s office was on the scene of a school shooting, a high school shooting in Maryland. ABC confirmed with sources three students were injured. One of the three is the shooter. A school resource officer was on duty and took action to end the threat. A school resource officer exchanged gunfire with the shooter at the Maryland school and ended it. 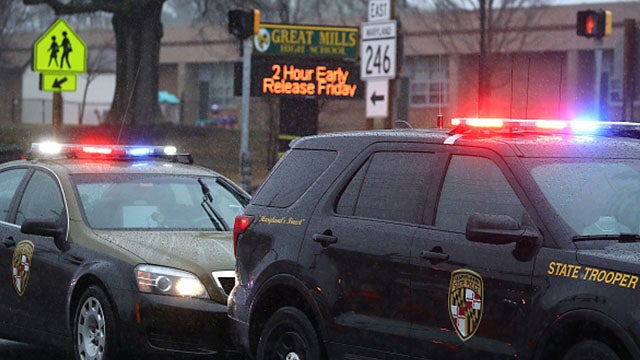 WTOP in Washington reporting the shooting began with a single shot fired at a girl in the hallway at the start of the school day at Great Mills High. Unclear how many more shots were fired, as the students and staff alerted the resource officer. That officer then moved to engage the shooter, pulled the trigger, and ended the threat.

Now, I’m gonna tell you what. If the media could do one thing right here, they would not mention the shooter’s name at all, they would not give the shooter any publicity whatsoever, but they would make damn certain the world knows how he was stopped. It wasn’t a gun-free zone. It wasn’t a student march. It wasn’t anything other than an armed security agent in the school known as a school resource officer.

There’s no alternative way to look at this. David Hogg and all the students at Parkland out there marching and protesting demanding no guns in the schools and whatever else and get rid of the NRA. The shooting in Maryland would have gone on a lot longer than it did had their way of doing things had been in place.

RUSH: Here’s Bob in Coronado, California. You’re next, sir. I great to have you on the EIB Network. Hi.

CALLER: Hey, Rush. In light of this school shooting in Maryland today — which, by the way, was more of a Chicago-style handgun shooting — a couple questions for you. One, I want to know if you think David Hogg is still gonna be an expert —

CALLER: — and secondly, do you think it would be reasonable to demand a school walkout celebration for the officer who shot the guy?

RUSH: Yeah, see, I mentioned this about — oh, I don’t know — an hour and a half ago, and Snerdley was listening while he was screening. But I’ve been there, done that. I’m not trying to steal your thunder. I made that exact point. We had three people injured. One of them was the shooter, who’s now died. The shooter was stopped by a school-resource officer. There was an armed agent in the school who shut this down, and I asked, “What does this mean for David Hogg? What does this mean for all of the leftists and the students they corralled to try to blame these shootings on the NRA and so forth?”

And everybody’s opposing in idea. “We can’t have guns at the schools! That would be outrageous.” Here we had a school shooting that could have gone out of control except this one had a school resource officer that actually went inside, found the shooter, and wiped him out, rather than stayed outside and “set up a perimeter” and then wanted a medal for it. So, yeah. Are all these like David Hogg and these are… See, we’re still not allowed to criticize the children, so have to be very, very careful here, Bob. Very, very careful. Which I was. I was very delicate. But I asked. I mean, the school walkout and so forth and blaming the NRA? How did that help stop this incident in its tracks?