Trump Is More Confident Than Ever

RUSH: New York Times: “Newly Emboldened, Trump Says What He Really Feels.” Now, does this mean that Trump has not been saying what he really feels all this time? Well, this is Maggie Haberman, and she said, “For months, President Trump’s legal advisers implored him to avoid so much as mentioning the name of Robert S. Mueller III, the special counsel, in his tweets, and to do nothing to provoke him or suggest his investigation is not proper.

“Ignoring that advice over the weekend was the decision of a president who ultimately trusts only his own instincts, and now believes he has settled into the job enough to rely on them rather than the people who advise him.”

Did I not predict this? They’re just recycling what I’ve always said. You know what I actually think is happening, Mr. Snerdley? I’ll never be able to prove this, and I probably shouldn’t even say it, because it’s gonna be misinterpreted as coming from egoville. But it isn’t.

I’ve stated that there’s nobody in the media who understands Donald Trump better than I do. And I’ve told you some of the reasons why, and it’s not because I’m a great friend of his. It’s not because I have a close relationship, because I do not. I haven’t spoken to the president, in four days it will be a year, March 23rd. That doesn’t matter. All I needed to see was the rallies. All I needed to listen to was the president speak as a candidate, as president, I know the bond. I know it all. And what he does, I know his sense of humor. I know when he’s poking people and they don’t.

And it was I who last week pointed out that Trump finally has his sea legs and, you know, the first year, admittedly, he doesn’t know enough people to put in these cabinet positions. You wouldn’t, either, unless you’re a career swampist. Imagine yourself, let me run through this example one more time.

Imagine you, whoever you are, let’s say you have a successful business, small business, just an average, ordinary person with a lot of education and opinions, and you’ve had it and you run for president and you get elected. And now you have to find a chief of staff, you have to find all the cabinet secretaries, and they’ve gotta be damn good people, and they’ve gotta be people that are right alongside you.

How many people do you know qualified to do those jobs? I wouldn’t know very many. And Trump didn’t either. So he wins, there’s all kinds of acrimony. I’m convinced that one of the things Trump did was listen to certain people in choosing his staff, thinking that he could ameliorate some of this opposition. Don’t forget, I met with the president — well, I had a meeting with him — at Mar-a-Lago in February of 2017. This is a month before the last time I spoke to him on March 23rd.

I asked him what surprised him the most, and he said the fact that there’s still such opposition. He thought that after a month, a month after the inauguration, that it would all settle down and the country would be on the road to unifying. And I will admit to you that I was stupefied, and I’m sure my facial expression betrayed that and I said, “Mr. President, they’re never gonna rally to you. They’re never gonna like you. They’re gonna hate you for as long as you’re there.”

And I said, “Mr. President, don’t be surprised if they spend the next eight years trying to get rid of you. They’re not gonna come together and unify. If you did everything they wanted agenda-wise, they’re not gonna get behind you.” And that stunned him. “You don’t think so?” I said “no.” And Reince Priebus was nodding his head in agreement with me. “You’re persona non grata, Mr. President. They don’t want you there, no matter what you do.” 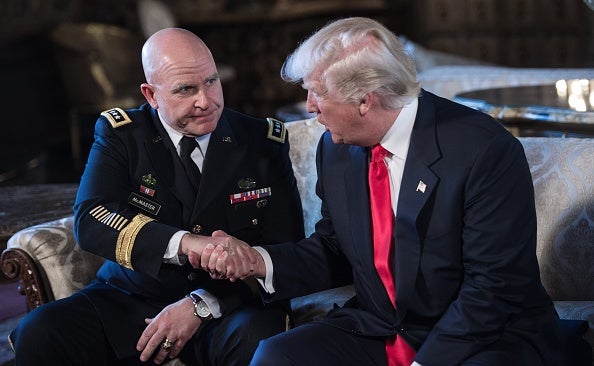 So I think Trump tried to not make them love him, but I think he did try, like any human being would do, to try to reduce the friction. And so choosing McMaster, Trump doesn’t know H. R. McMaster from the sofa in the other room. He doesn’t! He doesn’t know who H. R. McMaster is. Somebody had to vouch for him. And look. When he chose H. R. McMaster — I remember the day. It was at Mar-a-Lago. And H. R. McMaster and some other military types are sitting next to Trump, and the Drive-Bys went nuts!

But what’s changed is that Trump after a year now has gotten comfortable, and he has seen the people he’s chosen act disloyally. He’s seen them leak. And to heck with what other people are advising him. He’s gonna put people in his close group that he knows and trusts and likes. And that is giving him confidence. That’s what’s happening, and that’s what the media has noticed, and they don’t like it. And they’re bothered by it, and that’s why Maggie Haberman’s story, “Newly Emboldened, Trump Says What He Really Feels.”

Now he’s ignoring the advice of people who really know and he’s relying on his own instincts, which of course are very bad because he’s a Neanderthal, bull in a china shop. He’s an embarrassing thug. And so now it’s very obvious that Trump is confident, more than he’s ever been. And they’ve noticed. And they don’t like it.

There’s a new approval number poll out today, Trump up to 44. Now, polls here are a dime a dozen, but it’s a Drive-By poll and his approval numbers are up, and it’s the trend they look at, not just the final number. They’re not happy. See, in their world, they think they’re on the way to beating Trump down to the thirties like they did George W. Bush. But I’m telling you, if you spend any time this weekend watching the news…

Even though I advised you not to, even though I asked you to do an experiment, if you want to be happy, just turn it off for a week, and I guarantee you your overall mood and attitude about your own country will change dramatically. But you know something else I hear, Trump is also doing something that Reagan did, and that is more and more people are saying Trump makes them feel proud of their country again, happy about their country.