What I Found in My Spam Folder

RUSH: I was just searching the spam folder, ’cause sometimes mail that should reach me for some reason gets in there. And even though I’ve got all kinds of safeguards against that, there’s a number of steps you can take to make sure mail you want does not end up in the spam folder. But even having taken those steps, some of the mail occasionally gets in so I peruse it now and then, when I have time, just to make sure that there’s nothing in there that I need to see.

And I ran across what is obviously a phishing trick email. But I got a kick out of it, because it’s so unorthodox it goes so against the cultural grain today. And yet these are people trying to get people to click on the link. The link in this email is “click to unsubscribe.” That means if you don’t want to continue to get pestering emails from us, click on “unsubscribe,” and if you do that you are potentially opening up your computer to the people that sent you this thing.

That’s what happened to John Podesta. He fell for one of these type things, a phishing attack. Well, I don’t fall for phishing attacks. I haven’t for a long, long time. But this one — go ahead and switch to it. I made a copy of it. We’ve put it in the Dittocam switcher so that those of you watching on the Dittocam can actually see this. That looks like the Fox trademark, does it not? It’s not, but it’s very close. It’s very close to the Fox icon or logo. Underneath it, it says, “Fox News’ newest face, Sandra Smith reveals the truth behind how females keep their jobs.” 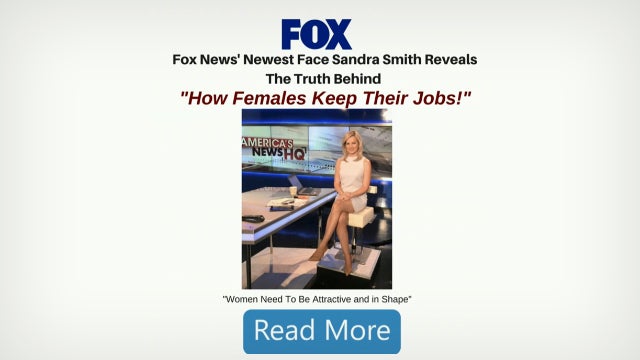 And then there’s a picture of Sandra. She’s an anchor, an infobabe on Fox News. She hosts a show at noon. She does some stuff on the Fox Business Network. There’s a picture of her on set wearing a very short skirt, smiling. It’s obviously a legitimate press photo. I don’t know how these clowns got it, but they’ve got it. So, “Fox News’ newest face, Sandra Smith, reveals the truth behind how females keep their jobs,” and you stare at the picture, and right under the picture is a caption, “Women need to be attractive and in shape.”

Well, now, this is gonna irritate every feminazi and left-wing — ’cause that is the exact opposite of what they think. In fact, it’s one of the reasons that they got so mad in the early era days of modern feminism. And then there’s the giant link, “Read more.” It amused me because it reduces what women have to do to succeed, look good. (laughing) Gigantic insult. And these guys think it’s gonna generate a lot of clicks. And it probably will. I mean, people fall for these kind of attacks.

Well, look, I’m issuing a warning here, and I’m actually trying to be protective of Sandra Smith. She’s not participating in this. Her image is being used illegally. I guarantee you Sandra Smith has not signed onto this. There’s nothing to sign onto here. This is a fraudulent phishing attack, and they’ve probably got a picture that they’re gonna say is in the public domain, and there is not a company mentioned here. So there’s nobody to target it. It’s a straight out of the book phishing attack. (interruption)

I’m not gonna comment on the picture. That would be falling for the trick here. Snerdley is trying to goad me by commenting himself on his impressions of the picture of Sandra Smith. I’m gonna remain above that. See, I’m not falling for that. And that’s why, again, more evidence of why the people on the other side of the glass do not have live microphones on this show.