RUSH: To show you how this is organized, Chuck Schumer today went to CNN this afternoon with Wolf Blitzer. And Blitzer said, “What do you make of this report that Trump is telling Ivanka and Jared to stay and then going to the chief of staff and asking them to get rid of ’em? What do you make of this, Chuck?”

SCHUMER: We don’t know how much veracity any of this has because different people in the White House tell reporters different things. I will say this. I’ve served under six administrations. I have never seen such chaos, I have never seen such infighting, and it has real results because the president’s positions keep changing. And not only the rest of the world, but Americans are saying, “What kind of leadership is this?” On guns, he changed around completely. On immigration he changed around completely. Who knows what he’ll do on trade tomorrow morning. 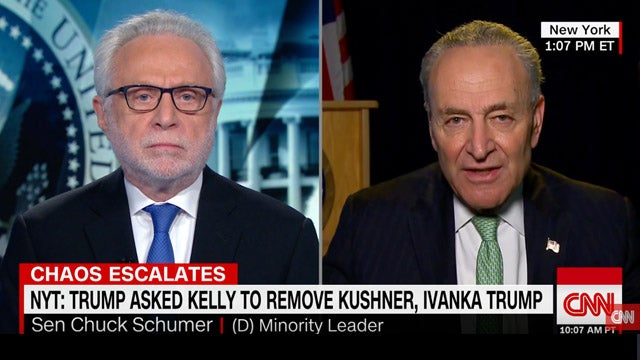 RUSH: Now, see, I think Chuck is missing it. I think all these guys are assigning incompetence to Trump, and I still say that what it really is: their total inability to understand him. He’s not one of them. He comes from outside Washington, D.C. He’s not a denizen of the swamp. And he’s got a totally different way of running his business, i.e., the West Wing, a totally different way of living his life.

Trump has not lived his life as most politicians do, i.e., faking this and faking that for this photo-op and that photo-op so it doesn’t come back to haunt you 20 years down the road. There’s no phoniness here, compared with much of politics. That’s another thing people don’t like about it, there was a measure of phoniness in everybody in politics, and Trump isn’t. He is what he is. And so this business, “You know, he changed around completely on immigration, changed around completely on guns.”

Maybe he didn’t. Maybe he was sandbagging you, Chuck. Maybe he was sandbagging you and Dianne Feinstein on immigration from the get-go, and maybe he’s sandbagging you on this gun business.” And on the tariffs, much as I might not like ’em, I don’t know why people are that surprised. It was a campaign promise that he made. He said he was gonna do this. And it was all part of the riff that he would get going on in trade and how if other countries didn’t deal with us fairly, then we were gonna give ’em a chance, and if they didn’t take advantage of it, he was gonna turn around and wreak havoc on ’em.

So who knows. Will he change his mind on the tariffs tomorrow? If he does, what somebody’s gonna say, like Chuck You, is some adult got a hold of him and shook his holders, “Mr. President, you can’t do it this way.” The objective here is to portray Trump as somebody that doesn’t know what he’s doing and that we’re really in trouble now because there aren’t any adults left, except for Kelly, and Kelly is under fire because he tried to defend Porter, so we can’t trust Kelly, the chief of staff.

So they want you to believe that your country’s rudderless and that we’re being led — well, we’re not being led. That we’re chaotically bouncing from point to point, position to position, and there’s no real reason or rhyme to anything that’s happening. And I can see how it would look like that to people who think politics is supposed to be a certain way and people in politics are supposed to behave according to a code, and people who are elected president are supposed to behave according to numerous expectations and demands. And that’s how they live. I mean, it’s a club and there is a dress code, there’s a behavioral code, there’s all kinds of secret codes, behavioral and otherwise that determine whether you’re a member in good standing or not.

Trump doesn’t come from that experience. He doesn’t know the codes, and he pretty much has been an outsider all of his life. Remember, he’s from Queens. He’s not from Manhattan. His dad’s from Queens. He’s not part of the Manhattan development, real estate development community. He’s an interloper there too. If he knew his place, he would have stayed in Queens, and he would have built stuff out there. But he moved into Manhattan, and he became one of the kings of Manhattan. He didn’t respect his place. And so he was hated and reviled and unaccepted by the so-called powers that be for a long time in Manhattan.

It’s they who are unhinged, and it’s they, them, who are acting crazily, as though they are in the midst of chaos that they don’t understand. And if they don’t understand it, then it must obviously be wrong. And there’s another thing to point out. This really isn’t new.

When Ronaldus Magnus was president — and I realize this was long enough ago that some of you in the audience were not even alive, some of you were too young to remember it. But do not doubt me when I tell you that much the same type of allegation was made against Ronald laying, that he was this out of control, unserious conservative, and he posed a great threat to the world because he might launch nukes against these communists.

And Reagan did things that Trump does. Reagan went in to record a Saturday morning radio addresses. During a mic check, he said, “Testing, three, two, one. The bombing starts in five minutes.” And of course the media found out about it, and they wanted to commit him to an insane asylum. “My God. What if the Russians heard that? He could have started a nuclear war!”

It’s no different than Trump saying, “Hey, Russia, can you find Hillary’s emails?” They don’t have a sense of humor, particularly when they’re the butt of the jokes. But it was Mikhail Gorbachev who was going to save the world from Ronald Reagan, all through both terms, folks. It was Mikhail Gorbachev that the media and the Democrats in this country invested total faith.

Teddy Kennedy, Senator Kennedy we found out when the KGB was overturned, found their files after the Berlin Wall went down, Teddy Kennedy had written numerous letters to Soviet leaders asking them to be patient and to not take Reagan seriously and don’t listen to him. He’s only temporary. Ted Kennedy and the rest of the country would get rid of Reagan soon enough and relationship would resume its normal status.

It was traitorous! You had the lion of the Senate in the Democrat Party sending letters to the Soviet leadership warning them, “Don’t take Reagan seriously and don’t be threatened. We’ve got him under control.” It’s no different than what they’re doing with Trump. Maybe a little bit more intense and more consistent and louder. It’s the same thing. And they did it with George W. Bush in the sense that he was stupid, couldn’t talk, world leaders didn’t respect him.

They do this every time there is a Republican in the Oval Office. But Trump is getting it like nobody ever has because he shouldn’t have won. I mean, the greatest insult to these people, the media, the Democrats, and the world, is that they could not beat this guy. They haven’t gotten over it, and they never will.