From Coast-to-Coast Dems Break the Law for Illegals

RUSH: I mentioned earlier a story that might have real impact on elections whereas Trump colluding with Russia didn’t. And here we go. It’s from the Washington Times. “More than 100,000 noncitizens are,” as we sit here right now, “registered to vote in Pennsylvania alone, according to testimony submitted Monday in a lawsuit demanding the state come clean about the extent of its problems.”

You remember during the 2016 election Trump was saying there might have been millions of fraudulent votes, and the Drive-Bys and the Democrats, “Oh, that’s crazy. You’re insane. You’re a lunatic. You’re a nut. Prove it! You don’t have any proof. You just run around, you shoot from the hip, you say these kind of stupid things. You’re a dumb guy, Trump,” blah, blah.

And yet trickle, trickle, trickle, we learn of things like this. “The Public Interest Legal Foundation, which has identified similar noncitizen voting problems in studies of Virginia and New Jersey, said Pennsylvania officials have admitted noncitizens have been registering and voting in the state ‘for decades.’ But state officials have stonewalled PILF requests for access to the data that could expose the problem,” says the Public Interest Legal Foundation.

He says: “‘Pennsylvania bureaucrats have concealed facts about noncitizens registering and voting — that ends today.’ He said Pennsylvania had already admitted to a ‘glitch’ dating back to the 1990s that had allowed noncitizens applying to renew driver’s licenses to be offered the chance to register to vote.”

We know this has been going on. And we got this mayor, we got this wacko mayor out in Oakland, California, who is actively helping illegal aliens evade law enforcement. She’s actually advising them when ICE is gonna be making sweeps and helping them avoid it. It’s not a big stretch to think people that would do that would start monkeying around with voter registration rolls.

Let’s go to the audio sound bites. This morning on Fox & Friends, the president’s favorite TV show, Brian Kilmeade is asking the acting director of ICE, Tom Homan, about the Oakland mayor, name is Libby Schaaf, and her TV announcement on Saturday warning illegal immigrants that an ICE raid was coming. Kilmeade said, “Did the mayor hurt that enforcement effort?”

HOMAN: Oh, absolutely. What she did is no better than a gang lookout yelling “police” when a police cruiser comes in the neighborhood. Except she did it to the entire community. I mean, it’s beyond the pale. I’ve been doing this for 34 years, and this is a whole new low, to intentionally warn criminals that law enforcement’s coming. I just can’t believe it happened.

RUSH: They don’t say “police.” They say, “Five-O.” I mean, when you’re anywhere and a cop car goes by, if you hear people yelling, “Five-O!” Then get out of their way, ’cause they’re the bad guys. So Steve Doocy said, “So we had a guy on a couple days ago whose son was killed by an illegal alien. He suggested that what this mayor is doing is obstruction of justice.” 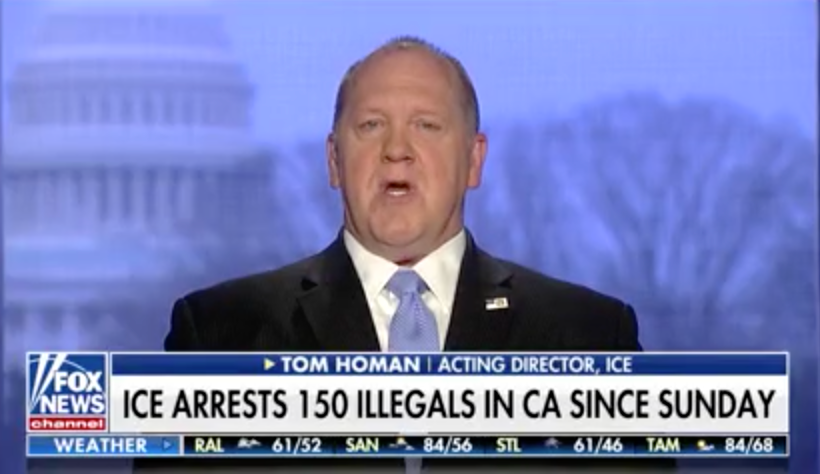 HOMAN: What she did is intentionally put law enforcement officers at risk. These are American heroes that strap a gun to the hip every day to defend this nation. And to tell the criminals we’re coming in the next 24 hours? It’s just incredible. I watched her statement when she says her priorities are the safety of her community. What she did had the exact opposite effect. So that community’s a lot less safe than it would have been.

RUSH: What about breaking the law? Why does that not enter the conversation? I know we can talk about the outcome of her stupid, risky behavior, but is she not held accountable to the law? It’s a sanctuary city in a sanctuary state. And remember, the California state officials have warned that ICE and Border Patrol are not welcome. You can’t come into our state. And they have said they’re going to be working with the illegals to help them avoid federal agents. You tell me that’s not against the law? This is the American left today. This woman is a Democrat. Libby Schaaf is a Democrat.

It was in San Diego.  Some people got confused and thought it was Comic-Con, but it was a Democrat convention, and they did not endorse her ’cause she’s not liberal enough.  They endorsed a guy from the California Assembly named Kevin de Leon.  But she is no moderate, and they’re portraying her as “a moderate, centrist Democrat who’s seen as an aging dinosaur and out of touch with California’s new progressivism…” She not out of touch with anybody.  She’s old, is what it is, and they want some youth in there.  She’d had her time. But it’s not that she’s not liberal enough.  She’s every bit as liberal as they need.

But still, California’s even further left and they’re going left at a rapid rate.