RUSH: No, no, no, no, it’s gonna backfire. In fact, the Democrats know it’s gonna backfire. In fact, the Democrats are already worried about it backfiring. All this hate, this overreaction. The NRA had nothing to do with it. Now 45 times local authorities were given a heads-up about the shooter! Forty-five times now. And now it’s been discovered that there was a memo circulating in the sheriff’s office, and everybody there was supposed to go out and speak positively of the sheriff if they spoke to the media. That was uncovered by Fox News and Laura Ingraham last night.

You know, this reaction that is happening out there, it is a different world than it was ten years ago. When the left started announcing all these boycotts, it pretty much prevailed, because people on our side didn’t know how to deal with it and didn’t have any confidence to deal with it anyway. They just saw another boycott coming and thought there was nothing they could do.

And now they’ve turned to a 17-year-old to be their primary number one spokesman on all this. The student at the Parkland high school. So I want to delve into this a little further as the program unfolds, because this is a positive part of the evolution of how the left has traditionally dealt with these kinds of things. They’re overplaying their hand, and they’re gonna continue to overplay their hand because this is the only way they know how. This is their knee-jerk reaction. As we learn more and more and more about this, we learn the NRA had literally, I mean, literally nothing to do with this, absolutely nothing to do with this.

Was Nikolas Cruz an NRA member? No. Was the shooter an NRA member? Have any of the previous mass shooters been NRA members? I don’t think so. In fact, the only NRA member I can remember who was involved in any mass shooting is the NRA instructor who stopped the Texas church shooter three months ago. It’s funny how the Drive-Bys have forgotten about him.

RUSH: Okay, so here we have a horrible school shooting where 17 precious lives have been lost. Each day we learn about the considerable, inexcusable errors — one or two, maybe. There were 45 warnings, tips, and heads-ups which were ignored, not treated seriously, what have you.

And in the aftermath of this, we have an irrational anger and rage pointed at an organization made up of grassroots Americans who literally had nothing to do with it. Shutting down this organization would not change what happened, and it wouldn’t prevent the next one, because the next shooter is out there. The next two shooters are probably out there, and they already have their guns, and I would wager that people who know these next two shooters know that they are there and are worried about them — and may, in fact, already be tipping other people off.

Is this what our society has become? We can sit here and wish it weren’t, but this is what our society has become. And it is clear that the American left wing has no more desire to deal with it and solve it than they want to solve anything else, because everything that happens can be categorized under the famous claim from Rahm Emanuel (paraphrased), “It’s silly to let a great crisis go to waste.” So we have a crisis here, and the Democrats’ definition of not letting it go to waste is using it to advance their political agenda.

More and more people are learning now, more and more people are seeing firsthand exactly what the Democrat Party and the American left-wing and media agenda is, and it isn’t to stop school shootings. It’s to win elections. It’s to rid America of any opposition to the left, to the Democrat Party, to the media. It is becoming fairly safe to conclude that this event need not have happened. There were ample warnings, there was ample time, there were ample means to shut this down.

But now we’ve learned that even after it began, there were no serious efforts made to stop it. Not immediately. And during all of this, an organization which had nothing to do with it becomes the focus of an irrational and uncontrolled rage and hatred. And it is now the instrument of another trumped-up, left-wing boycott that is nothing more than therapy for deranged left-wingers to assuage their anger or utilize it or what have you in service to their political agenda.

Now, one thing that this is doing, if you will permit me to be a bit… I wouldn’t call this callous, but I’m just gonna observe something. Every moment spent on this incident is another moment avoiding the great improvements in the U.S. economy, the rising public opinion on the tax cuts. The Washington Post… I kid you not. The Washington Post has a story in which they seem genuinely puzzled that the American people are happy with more money in their paychecks every pay period.

I’m not kidding you. When I first saw it, I characterized that… I said, “This can’t be. We can’t be this off the rails on the left.” But, lo and behold, if you read the Washington Post piece, you can detect that they’re puzzled that people are happy with the tax cut. They’re puzzled by it. They’re puzzled why more money is the paycheck every week matters that much, because poll numbers are skyrocketing on the tax cut. Trump’s approval numbers are holding steady now, the second poll in a row at 50%.

This episode at the high school is granting the Drive-Bys and others every opportunity to avoid the continued reporting on all of the good things that are happening in the country. Businesses are doing well. Small businesspeople report that they are optimistic. People who are not even political are noticing the increase in their paychecks. Some of them are quite significant. A lot of people are getting a lot of raises. A lot of people are getting bonuses. 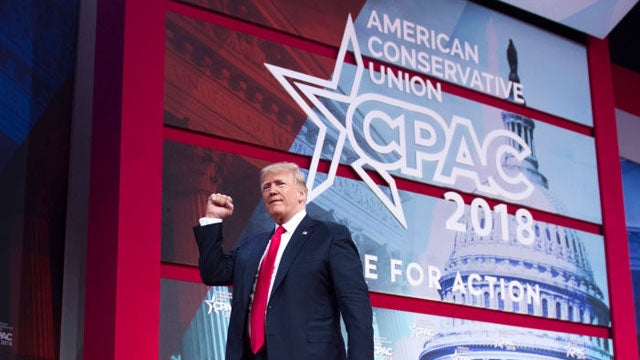 A lot of people are seeing expansions in their benefit packages. We are reaching statistical full employment. The Heritage Foundation today has issued a report saying that 65% of Donald Trump’s agenda has already been accomplished in just one year. There isn’t a president in modern times who got even close to that. The Heritage Foundation reporting that 65% of Trump’s agenda has already passed. Trump is not slowing down.

Trump is not being distracted or deterred despite every effort to misdirect him, slow him down, change the energy level behind what he’s attempting to accomplish. And in the midst of all this, we have the traditional, usual Democrat playbook being utilized here to try to wreak havoc and harm, pessimism, negativism. I really do believe that it’s beginning to backfire. I talked to somebody who has been away on brand-new grandmother duty, and she hasn’t had a TV in six weeks, and she just recently re-accessed TV.

Her assessment of this — after not having had TV for six weeks — is that the gun control hysteria that the Drive-Bys have tried to gin up is now starting to blow back on them. The realization that the sheriff down there may not (chuckles) be all he’s cracked up to be, that the indoctrinated high school kid, this David Hogg — who is everywhere, and that the Democrats have hung every hope they have on this kid to go out… What is this? This kid’s saying some of the strangest things, and they’re putting every…

They’re investing everything they’ve got in this guy’s TV appearances, leading the way, as a student. Because as a student he’s unassailable. You can’t criticize the students, and you can’t even say that the students are political. Oh, no! They’re the victims. They get hoisted to a position which is not political, which is supposed to grant it even additional credibility. And the view is, it doesn’t seem to be working. They don’t seem to be winning converts. What the left and the Democrats seem to be doing is generating a rising opposition to what they’re trying.