The Delicious Ignorance of Marie Harf

RUSH: I’m looking at the clock. I don’t have sufficient time. We have a Marie Harf sound bite coming up, and it’s awesome. The only thing it’s missing… She was on Fox a couple hours ago, and the only thing that’s missing is her pronunciation of the word “admini-shration,” and it was all of this sound bite, and it was hoping when I requested this that it would be in there, but it didn’t fall within our allotted time. But it was… No, Michelle Obama. We’re down for the sh’truggle, “admini-shtration.” It’s almost now a required pronunciation technique of women on the left pronouncing that word.

Believe me! I observe these things.

Now let’s go to Marie Harf. What’s being discussed here? Russian meddling in the 2016 election. And it has come to light — and we were on the cutting edge of this — remember Obama bragging how he had told Putin to cut it out? And Obama telling everybody the Russians couldn’t affect the outcome of our elections. They’re too complicated. They’re too complex. And Obama let everybody know it wasn’t that big a deal.

Remember, everybody thinks Hillary’s gonna win. Obama couldn’t start giving credit to the Russians for being able to affect anything because that would taint her win. So Obama’s out there basically saying the Russians are meaningless, they can’t do anything because nobody wanted to taint what they all thought was gonna be Hillary’s victory.

But what then came to light is that, well, if Obama knew that the Russians were doing this back in 2016, then why didn’t he do something to stop it? Why all of a sudden now is it up to Trump to do something about it, when Obama was fully aware of it and talking about it and told everybody that he had told Putin to cut it out, why is Obama getting a pass? So Bill Hemmer says to Marie Harf, “President Obama said to Putin two months before the election to cut it out. Was that the extent of it?” 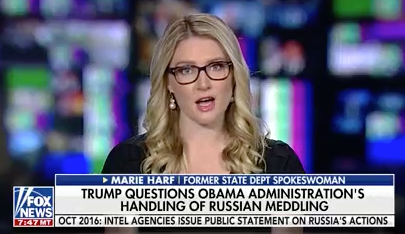 HARF: My former boss and others confronted Russia repeatedly over this, and we did take steps. Publicly before the election we came out and named and shamed Russia so voters would know what was going on, and we eventually expelled dozens of diplomats.

HARF: We also had a Republican candidate at the time, Donald Trump, who was on this campaign, speeches saying, “Russia, please interfere. Please hack Hillary Clinton, and please release those emails.” So we were confronting a candidate who was actually encouraging Russia.

RUSH: Hemmer, I don’t know, I’m guessing, but he says, “You know, I just want to –” I think what he was gonna say is, “Marie, you guys really didn’t take it that seriously, did you?” But they did. See, they did. This is classic. This is a classic illustration of the left being humorless and having no sense of humor and no ability to recognize it and certainly no ability to laugh at it. Let me play again for you what she’s talking about. “We had a candidate who was in speeches, ‘Russia please interfere, please hack Hillary, please release those emails.’ So we were confronting a candidate who was encouraging the Russians to hack Hillary.”

It’s absurd. It is mind-blowing. They really think this. I tell audiences when I speak, I give them examples of what liberals say, and they start laughing, and I stop them. And I say, “Folks, they believe this. They believe this stuff.” As a predicate to saying there’s no compromise with these people and there’s no educating them. There’s no bringing them up to speed. These people have to be defeated.

Marie Harf, for all of her education, and for all of her sophistication, for all of whatever else she has, is ignorant, just plain, flat-out ignorant. This is what Trump said. I’m sure you’ll remember it. It was July 26th, 2016, in Doral, Florida. And it’s what triggered this whole thing. And at the time everybody’s trying to find out what happened to Hillary’s emails.

She had 60,000 on her server. She deleted 30,000 and turned 30,000 over. Those 30,000 that she deleted, they have to be somewhere. Comey said he couldn’t find them. Comey in his July 5th press conference, which is about three weeks prior to this, had exonerated Hillary. They couldn’t find the 30,000 emails. They weren’t looking very hard. But it was a subject of interest.

And so there’s a press conference that Trump holds at Doral, his golf club down there. And during the Q&A, this is what Trump said about Hillary’s missing emails… 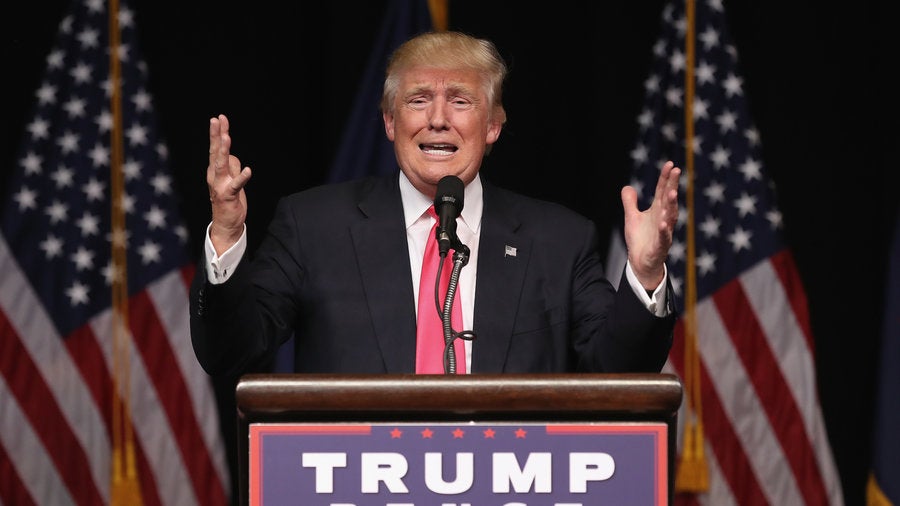 TRUMP: I will tell you this: Russia, if you’re listening, I hope you’re able to find the 30,000 emails that are missing. I think you will probably be rewarded mightily by our press. Let’s see if that happens.

RUSH: I watched it. I watched it and I’m laughing myself silly. I’m saying, “This is exactly how I would approach it. This is great parody, great satire. This is ramming it right down their throats. ‘Hey, maybe if you guys can’t find… You guys say Russia’s doing this and you guys say Russia’s doing that. Well, hey, Russia, maybe you can find these emails, and if you do, turn ’em over to our media,'” and look how they interpreted that.

Marie Harf, “We had a candidate at the time who was on the campaign speeches saying, ‘Russia, please interfere! Please hack Hillary Clinton.'” No! Please find what had already been hacked. This is instructive, folks. They really believe this lunacy that they profess. Some of this, they really believe. It’s not just strategized, focus-grouped phraseology. They really believe this. They are really that humorless and dense, and I think probably filled with hatred for Trump. Now, Cookie went back,and she produced a loop for me — just an eight-second loop — of Marie Harf and her pronunciation of the word “admini-shtration.”

This bite… Now, you might think, “Rush, this is nitpicking. You don’t talk about the way people talk.” Well, yeah, I understand that. But Marie Harf sounds just like Michelle Obama. Look, I’m a speech student. I’m a breathing student. I am a student of the diaphragmatic method. I listen to the way people enunciate. I listen to the way people pronounce. You can learn a lot from it, and there are certain things that just stick with me, and I wonder where they are rooted and why they are never corrected, and Michelle Obama is constantly… If she ever says the word “struggle,” it’s “sh’truggle.” 42nd Sh’treet. And Marie Harf here. Here’s the loop. This is Marie Harf talking about where she worked…. 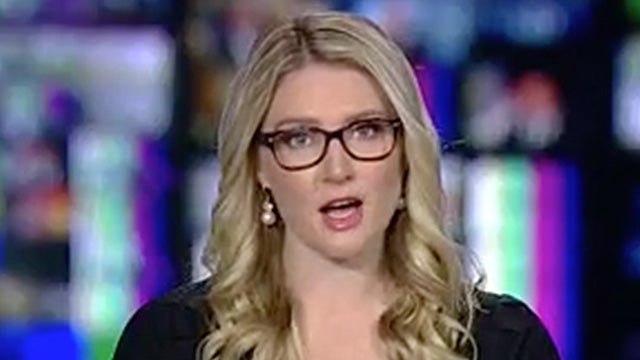 RUSH: Okay. Okay! That’s good. You get the idea. “Admini-shtration.” I know you’re saying, “So what, Rush? Why are you wasting valuable programming time with this observation?” Because it just fascinates me. “Admini-shtration.” If somebody told me that I was pronouncing a word that way, I’d fix it. It’s all I’m saying.

RUSH: Here’s Obama. This is from our archives way back on October 18, 2016 in the White House Rose Garden. Question: “Donald Trump is telling his supporters the election is rigged. He’s asking to monitor certain areas on Election Day. Are you worried that the election Donald might be distrusted?”

OBAMA: I have never seen in my lifetime or in modern political history any presidential candidate trying to discredit the elections and the election process before votes have even taken place. It’s unprecedented. It happens to be based on no facts. … [T]here is no serious person out there who would suggest somehow that you could even rig America’s elections, in part, because they are so decentralized and the numbers of votes involved. There is no evidence that that has happened in the past or that there are instances in which that will happen this time. And so I’d invite Mr. Trump to stop whinin’ and go try to make his case to get votes.

RUSH: There’s Obama in 2016. (paraphrased) “It’s not possible! It isn’t possible, unprecedented. Nobody’s ever whined and complained about election results beforehand.” BS! The Democrats do it before every election. The Democrats are constantly shouting about voter fraud.