RUSH: Now, there’s a story in USA Today, and I’ve had some people react to this and no two reactions have been the same. The headline: “Exclusive: Ivanka Trump Teams up with Conservatives to Push Democrat Agenda.” It’s a story out of Greenville, South Carolina. Ivanka let the USA Today infobabe travel with her on a business trip to South Carolina, and Ivanka flew coach, and she sat two rows from the lavatories in the back of the plane. 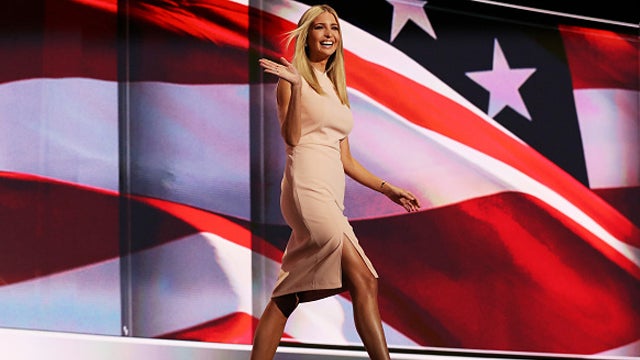 And the infobabe is sitting next to her and doing a profile story of a day in the life of Ivanka. “Ivanka Trump showed up in Washington last year with a to-do list of policies straight from the Democratic Party playbook. The president’s daughter — a former Democratic donor — wanted the administration to tackle paid family leave, equal pay for women and affordable childcare.”

And then he looked up there at the gallery, and that is where Ivanka was sitting. So this was something that Ivanka secured. She got that as an agenda item, and she got it included in the State of the Union. Now, hang on. It says here that Ivanka thought Democrats — ’cause she was known, she and her husband are known liberal Democrat social set people in Manhattan. And so Ivanka thought the Democrats would eagerly join her. Once her dad became president, she thought her liberal Democrat buddies would join her and move their agenda forward. Same issues she had been championing for years before her dad ran for president.

But after her dad won, Democrats were not eager to sidle up to her, ’cause they were so ashamed of Trump and Trump was such a bad guy that they just couldn’t see getting on board with Ivanka. Then there were others who thought that Ivanka’s plans were not liberal enough. And they would still discuss the issues with her, but they didn’t team up, they didn’t join her, they didn’t help her, and she was surprised that people she’d known all of her life would not join her in her quest to advance their agenda as the president’s daughter.

And so the USA Today infobabe asks her about this. She said, “I’m no longer surprised,” about the partisanship in Washington. “I think that there are always people that will not move off of their talking points and then there are a lot of people who will. You have to find the people who will; that’s how you build coalitions.”

So she said I gave up on the people that I knew were intractable. My former friends or friends who were formerly right on board with me, wanted no part of it for other reasons. So I just abandoned them and I went and found people that would change and would move and would join me.

And the story makes the point that one of the reasons Ivanka may succeed in this is that she is not a politician. She is instead a businesswoman and, as such, her approach to this is not building political coalitions because she’s found these hard-and-fast people that will not move, will not change their position for whatever reason. They don’t like her dad. They don’t want to be associated with anything seen to be close to Trump or whatever. So she approaches this as building a coalition in business, not so much focusing on ideology.

And the reactions I’ve had to this, some have thought, “This is brilliant. This is absolutely brilliant.” Others are, “Wait a minute. I don’t like the way conservatism’s being defined here. I don’t like this new conservatism being liberalism advanced by a so-called Republican president.” I’ve had all kinds of people with, you know, ups and downs, positive, negative reaction.

They quote Mark Meadows from North Carolina. He heads the House Freedom Caucus, the conservative group. He told USA Today he’s had many meetings with Ivanka about topics “that conservatives would normally not be in favor of. … She makes very compelling cases.” Some of the reaction I got, that quote made some people nervous. Look, I’ve gotta take a break. I’m not through with this, but I’m probably gonna have to suspend discussion to another day.