Andy McCarthy’s Insight on the Strzok-Page Text on Obama

RUSH: We have a little bit of an update on this story from The Daily Caller: “FBI Missed Clinton Emails Openly Marked ‘Classified,’ Wanted to Conclude Probe Before the Inspector General Caught the Mistake.” Look, everything we’re learning about this just confirms what we are pretty confident we know, and that is the fix was in when it comes to any investigation of Hillary Clinton. It was never, ever gonna amount to anything — just like it never, ever has.

There never has been an investigation of the Clintons that ever went anywhere, short of Bill Clinton being caught lying under oath testifying to Ken Starr in a grand jury. That would be hard to cover up. But he got a slap on the wrist for it. He kept his office in the presidency but lost his law license (he wasn’t even using it) and the Democrat Party made him their ranking biggest star until Obama came along.

But this story is “The FBI didn’t flag that some emails from Hillary Clinton’s private email server were marked classified with a ‘(C)’ when they were sent — something that seemingly would have been one of the first and most obvious checks in an investigation… The Intelligence Community Inspector General noticed it after the FBI missed it, texts between” Strzok and Lisa Page. Man, these people were doing nothing but texting each other.

I wonder if they found a way to have sex via text message, because they were doing this a lot more than they were doing that, it seems to me. These people were just back and forth like you can’t believe. And a new reveal here. “Holy cow,” Strzok wrote, “if the FBI missed this, what else was missed?” What they missed was that Hillary was trafficking in classified data. You and I all know this. This is why all of this is so maddening and frustrating. We know it.

We know what she did. We know what she did was illegal. So do they. They exonerated her. They helped make it look like it wasn’t illegal — and even if it was, she didn’t intend it to be, so nothing to see here. “‘[I]f the FBI missed this…what else was missed?’ … ‘Remind me to tell you to flag for Andy [redacted] emails we (actually ICIG) found that have portion marks (C)'” for classified “‘on a couple of paras[graphs]. DOJ was Very Concerned [sic] about this,’ he wrote. Found on the 30k [emails] provided to State originally. No one noticed.'”

If you remember back when all this was happening live, we had story after story that, “Well, look, there’s so much classified, practically all of it is so you really can’t hold her accountable for that.” And then, remember there were some, “She didn’t know that the C meant classified!” Remember that excuse being offered? She thought the C was like a copyright symbol. She’s looking at internal State Department documents and she thinks that some of them had a copyright insignia there rather than a C for classified. 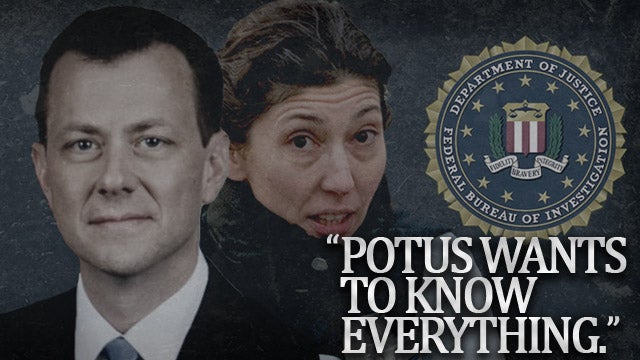 And we were told, “Well, that’s understandable.” No, it’s not understandable, and she didn’t think that! She knew they were classified. She didn’t think things were being copyrighted here. The fix was in from the get-go, for whatever reasons. I’m sure there are multiple reasons. Now, I want to backtrack to something that a lot of us consider to be pretty important, bombshell stuff yesterday, and that is the discovered text messages Lisa Page to Strzok telling him: “POTUS wants to know everything.”

And we inferred from this that Obama was interfering and demanding to be told everything they were learning in the investigation. I got a heads-up last night and this morning from my old buddy Andy McCarthy who says, “Rush, don’t feel bad, but you and everybody are missing the point on this,” and I’m just gonna read what he wrote. He said, “Rush, the issue is not that the FBI was briefing Obama. This is a counterintelligence investigation, not criminal.

So Andy’s point here is that the real point that everybody needs to realize — the real thing everybody needs to realize here — is Trump cannot be guilty of obstructing this. It is a counterintelligence investigation. And, as such, all of the work product produced is for the president. It’s not that he has to ask for it, and it’s not that asking for it proves any kind of bias or intersection of politics and so forth. It’s simply the way it is. 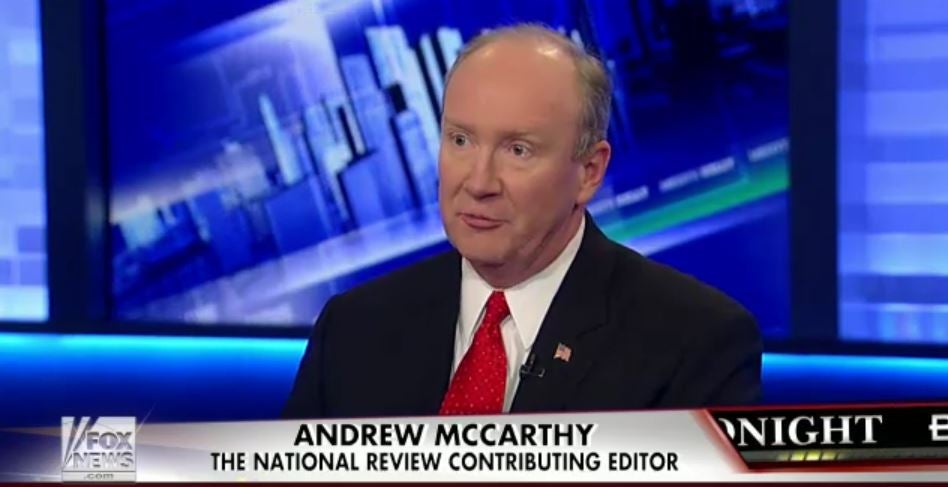 Now, in fairness, I realize some of you are gonna think, “Wait a minute. This doesn’t make any sense. I don’t understand it.” McCarthy has been pounding this point for over a year in column after column after column that this whole thing that we are in the midst of here is a counterintelligence investigation and not criminal. And the reasons, the distinctions, the differences are significant and profound.

So Andy’s point here is Strzok Strzok were not violating any laws by keeping Obama informed because they’re required to. It’s not unusual Obama would want to be kept informed because all presidents are entitled to be informed. What the real take away here is that there is no way Robert Mueller or anybody else can find President Trump guilty of obstructing a counterintelligence investigation because he’s entitled to know everything going on within it. And yet they are still investigating Trump for obstruction! And who knows what Mueller’s gonna produce.

Now, they know what I’ve just told you, but it’s not gonna stop them. Because they’re relying on the fact that many people think this is a criminal investigation. And it’s a pretty big distinction. Okay. Let me take a break here. I wanted to make sure that I got to this before too much time went by, because everybody thought we had a bombshell yesterday, and many of you might still think we do. I’m just sharing with you one of the few experts that I consult here.

In most cases, I’m the expert. But, in some rare instances, I need to consult those who have actually worked in these departments and whose careers are built around this kind of knowledge. And Andy McCarthy is one of those types. So I wanted to make sure I got that to you before too much time went by today.

RUSH: Let’s go to Georgia. Got a guy who read the dossier. Robert, great to have you, sir. Welcome to the EIB Network. Hello.

CALLER: Hello, Rush. It is such an honor to be with you today.

CALLER: You got it. I want to provide another example why the fix was in. I read the Russian dossier last night. I saw the references to Paul Manafort and Carter Page, and we know what happened in the FISA courts. But I also saw the reference to the Russians hacking the DNC and nothing happened there. So if the FBI was using this dossier to investigate folks, they were investigating the Republicans but nobody’s investigating the DNC hack.

RUSH: Well, there’s a reason for that.

CALLER: The fix was in.

RUSH: The Democrat National Committee, Debbie “Blabbermouth” Schultz, told the FBI to go pound sand. The FBI wanted to forensically examine their networks after they said the Russians had hacked ’em. The story was that the Russians had hacked the DNC server and had tried to attack the RNC’s network but failed. So the FBI wanted to forensically examine that server to try to find he find of who hacked, where they were, how it happened.

And the Democratic National Committee turned them down. They said, “No, you can’t have these servers!” And the FBI said, “Okay. Fine.” And they went away. And the DNC hired a private sector company called CrowdStrike who did the forensic analysis of their server and then came away with… That’s who told us that the Russians had found their way into the DNC network and hacked it.

CALLER: I just don’t… It seemed rather capricious for the FBI to investigate Republicans but they’ll take Debbie Schultz’s word for it and not investigate.

CALLER: We’re gonna get warrants at the FISA court’s for Republicans, but over here we’re not gonna do anything.

RUSH: No, it wasn’t that they took her word for it. She didn’t tell ’em that nothing happened. She just refused to let them have access. And I’ll tell you why. I mean, I couldn’t make a bet on it, but the answer here to me is obviously clear: They were running a rigged game against Bernie Sanders. The Democrat primaries? Ha! That was rigged. That outcome was preordained. This is, by the way, known, folks. This is not speculation. It is now known the Democrat primaries were rigging for Hillary Clinton — and the evidence would have been found on those servers.

(interruption) Well, is there any doubt that’s how she treats men? (interruption) “Would you want to…?” (interruption) I wouldn’t. So CrowdStrike comes in and they present their evidence. “We’ve found, Ms. Blabbermouth, that the hack here did happen and there’s clear evidence here that the primaries were stacked in favor of Mrs. Clinton!” Blabbermouth shoots up out of her chair, “You will not report that!” As the employee, as the contracted company, they would have to abide by what the DNC said. The DNC could not tell the FBI to suppress it.

The DNC could not tell the FBI, “You will not make public what you find,” but they could tell a private sector firm they hire. I don’t think there’s any question why they did that. Now, the dossier that you read clearly detailed how they were targeting Trump and Trump associates and so forth. But this was… The effort to get Mrs. Clinton was never serious, and certainly not in the dossier. (interruption) Well, that’s what I always thought, that if it’s… Look, let’s set the table here.

You have both major parties claiming that hacks of their networks — RNC, DNC — took place, and you’re pretty sure that Guccifer 2.0 (Russia) did it. So the RNC let’s the FBI take a look, and the FBI says, “You weren’t hacked; you’re clean.” The DNC tells the FBI, “No! You cannot examine our servers,” and the FBI slinks away and says, “Okay.” That’s odd. We’re dealing here with the Russians. We’re dealing here with national security. 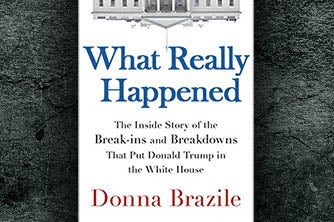 The FBI simply turns tail and says, “Okay. Fine. You don’t want us to look at it? We won’t.” Why? It’s national security. They’re spending 18 months trying to track down something the Russians didn’t do with Donald Trump. Something the Russians did do to the DNC server, they seem to be uninterested. But it all fits with everything else that we know. Hillary was never a target; she wasn’t going to be a target. Hillary was — if anything — to be defended, protected, elected — and everybody in the swamp was oriented with that outcome, that objective in mind.