RUSH: John Kelly, he is the chief of staff. He said that President Trump may not extend the March DACA deadline. And you know why he said that? He said because Trump may not have the power to do it. It’s an unconstitutional act! How can Trump legally extend something that is illegal? 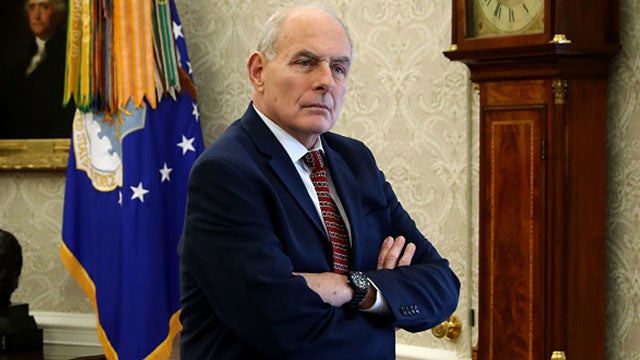 Trump is not expected to extend the March 5th date by which he wants Congress to pass legislation to fix the DREAMer problem. Kelly told reporters today, “I doubt very much” that Trump would extend the date. He said he was unsure “if this president has the authority to extend” the date because the program was not based in law and was created on illegal grounds under the Obama administration, and it shouldn’t be in existence in the first place.

Trump has announced it’s going by the wayside many times. It should be gone now. It’s not because of the political aspects. And Kelly wasn’t finished. He had a little confab with journalists today and had this to say about some of the DREAMers.

KELLY: There are 690,000 official DACA registrants, and the president sent over what amounts to be two and a half times that number to 1.8 million. The difference between 690 and 1.8 million were the people that some would say were too afraid to sign up, others would say were too lazy to get off their asses, but they didn’t sign up.

KELLY: But the president shockingly said, “okay, 1.8 million,” and then probably the biggest shock was — “and a path to citizenship.” That’s beyond what anyone thought could have happened.

RUSH: So he’s defending Trump’s number here, 690,000 official DACA registrants. But Trump has offered to fix it for 1.8 million. And Kelly says the difference is that there are people that were too lazy to get off their asses and sign up for the program, but we know they’re out there.

Now, in polite Washington, you don’t call illegal immigrants lazy, and you don’t tell them to get off their asses. That just isn’t done. This is gonna anger these clowns more than the way Trump talks. And this guy’s from the swamp. “Others would say that too lazy to get off their asses and didn’t sign up.” I mean, that’s almost as bad as saying that they’re from S-hole countries. Maybe the two go together, you’re from an S-hole country, you’re too lazy to sign up. Either way, scram. The answer to all this: Build the wall already.