RUSH: Yeah, yeah, yeah, I’m gonna get to the memo here in just a minute. Supposedly the FBI chief who Trump named is — well, CNN says the FBI chief is clashing with Trump on the release of the memo. Now, let me just tell you, the FBI chief has to publicly oppose releasing the memo in order to maintain morale inside the FBI. That’s my guess. Now, Snerdley told me he thinks it’s a slam dunk, the memo’s gonna get released because the chief of staff John Kelly said it’s gonna be, but, my friends, I wouldn’t cash in my chips on this just yet.

I mentioned this to Snerdley and he said, “What do you mean? Of course they’re gonna release it.” I wouldn’t go to the bank on this yet. I’m not gonna believe it until I see it released. I hope it is. Don’t misunderstand. 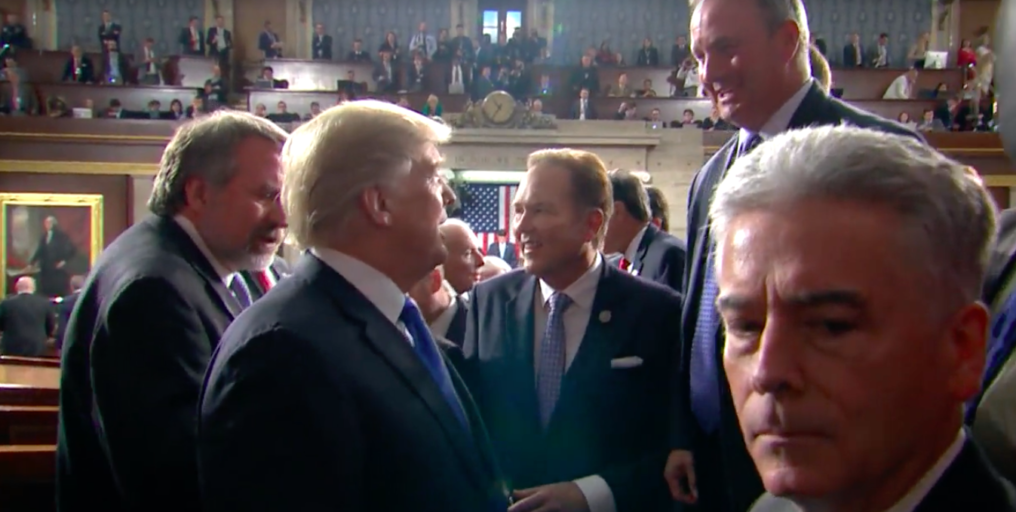 RUSH: Now, there is a narrative today.  This is what this springs from.  Last night after Trump finished and he was walking out signing autographs and posing for selfies and so forth, somebody urged him — some member of Congress urged him — to release the memo and Trump said, “Oh, yeah! Oh, yeah! A hundred percent! Gonna do it. Gonna do it.”

Well, this sent the left into a panic, because up until then there is always held out hope that maybe they could get this thing suppressed.  They don’t want it out there because it’s the truth.  So the narrative today is that high officials in the Justice Department and the FBI do not want this memo released because it contains many factual inaccuracies and would pose a great security risk.  Now, I think this is total BS.  I think it’s a made-up lie.

But it becomes a news narrative.  The media doesn’t care, as long as somebody they trust on the left says it, it could be a blind source in the FBI.  It could be a confidential informant. You know, a leaker in the DOJ.  “Yeah, yeah, we’re really afraid here. This thing’s got so much in it that’s wrong.”  That’s all they need.  That’s all they need.  As long as they’re not making it up, as long as they can slough it off to a source, they’ll run with it.

And CNN hasn’t let this go.

From the moment they dropped coverage of the Republican train wiping out that pickup truck, they have not let go of the story that high officials in the FBI and the DOJ are begging the administration not to release this because it is so wrong — and I don’t believe that it’s wrong.  I don’t believe it’s factually incorrect at all.  It’s just pressure being mounted not to release this thing precisely… If it were factually incorrect, the Democrats would want it out there so they could destroy it with the truth!  This is what you have to think. If they’re desperate to keep this thing hidden and if they’re out there saying that it’s factually incorrect, they ought to welcome it.

They run the media.  They control the media!  They could have any reaction to this they want.  And if it is wrong, all they have to do is tell us what’s wrong and present us with the truth.  Why wouldn’t they want this opportunity?  If the Republicans have put together a four-page memo explaining all of the malfeasance that has gone on in the FBI and the DOJ in this investigation, if it’s wrong, why wouldn’t the Democrats want an opportunity for the Republicans to make a fool of themselves?  Because that’s what this would be, wouldn’t it?

If Devin Nunes and his gang that put this thing together… If it’s that bad, if it’s that wrong, let them make fools of themselves and let them destroy their credibility forever.  The Democrats and let media should be welcoming the release of this memo, if it’s wrong, if it’s mistaken, if it is factually incorrect.  But they really do want it suppressed because it is factually correct, and they don’t have any alternative.  They can’t take this memo and point out what’s wrong and then show us the truth.

This is just trying to discredit this thing before it’s released.  I mean, if they could suppress it, that would be the ultimate success.  But if it does come out, they’re simply trying to discredit the thing before it hits.  And, by the same token, this is why Trump did not mention this in the State of the Union last night.  I think he wants it to stand on its own without… He could have read the contents of this thing last night but didn’t.