The moderator was Walter Isaacson, biographer of Steve Jobs and some others. He runs the Aspen Institute to go out there and ski between conferences. It’s how you deduct the skiing is you go to the Aspen Institute. Isaacson runs it. CEO Adam Neumann, who has a place called WeWork, “a communal workplace manufacturer,” was being asked about his company. Walter Isaacson said, “I just heard it described as sort of a co-working space, but to me, WeWork is a little bit more than that. What is what is it?” 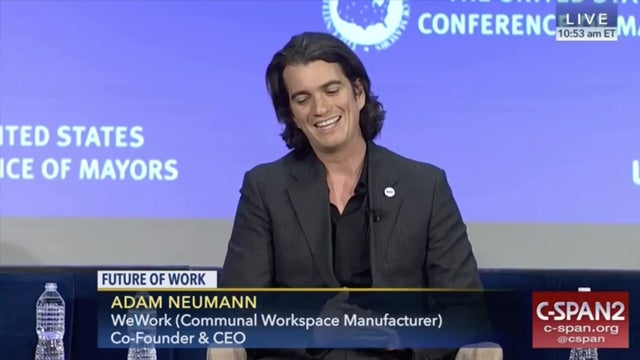 NEUMANN: I’m an Israeli immigrant, came from Israel. And I grew up in a kibbutz. It’s a little bit of a commune, and it’s where everybody works toward one cause, everyone makes the same amount of money, and everybody shares services. In WeWork, we don’t discriminate between age, gender, race, or religion. As long as you understand that being part of something greater than yourself, treating other people the way they want to be treated is the utmost important. As long as you understand that giving is receiving, you’re a member of the We Generation.

RUSH: Okay so Reagan brings down Soviet Union, and now the Millennials are gonna try to bring it back! They’re trying to revive communism here. That’s what this was. Commune? He admitted it. It’s a commune, like a kibbutz. “Everybody works toward one cause. Everybody makes the same. Everybody shares services. No differences. We don’t discriminate between age, gender, race or religion.” You watch; they will. You let one conservative end up in this place and it will be a… Well, it won’t be pretty. Next question from Isaacson. Do I have time? Yeah, we can squeeze this. “You just bought the Lord & Taylor building in the middle of the Manhattan. What do you do with that?”

NEUMANN: The reason we did that — and this is all part of the same story. Retail used to be very smart people in the past thought that you take a beautiful building, you lock all the windows, you let no light in, you sell a lot of stuff to people that might want it or not, and that’s retail experience. Well, as Millennials are starting to be the biggest shoppers — and by 2020 Millennials are gonna be over 50% of the workforce — they don’t want to buy that way. They’re buying online.

RUSH: Yeah, grab sound bite No. 26. One more. This is Adam Neumann from the company WeWork “a communal workplace manufacturer,” being interviewed by Walter Isaacson. “Tell me how you see it as a larger eco-system, not just work, but living, even learning everything else being part of what a Millennial will do.”

NEUMANN: We talk a lot about Millennials, and with a lot of respect to that generation, I like to call it the We Generation ’cause I don’t want to limit it by age. As I said before, anybody who — who wants to be part of something greater than themselves and understands this sharing economy is a member of the We Generation. What we’re really looking for is, “Let’s bring them in and let’s bring them together,” and in a person’s life, the most important pillars of our life is where we live, who we’re with, who our kids and our friends are, where we work, and then how we study, how we learn, how we grow as human beings. And I like to say, “If you had to prioritize them, first personal growth; then your partner, your spouse; then your kid; then your friends; then business.”

RUSH: Yeah, right. Um, that’s gonna change too. I mean, all the rest of that stuff’s academic if you don’t have a means of support. But, anyway, this is illustrative here of some of the peer pressure that Millennials are facing to be no different, to share everything, that nobody is any different from anyone else — including talent and capability and ambition. It’s just another challenge we face here, folks.