RUSH: Let’s start with the audio sound bites demonstrating my cutting edge of societal evolutionness. I want to start with something I said yesterday on this program. You who were listening will remember this. It was about Apple and their repatriation of $250 billion, and their decision to spend another $350 billion investing in a new headquarters and hiring 20,000 workers, and this is the essence of my point yesterday… 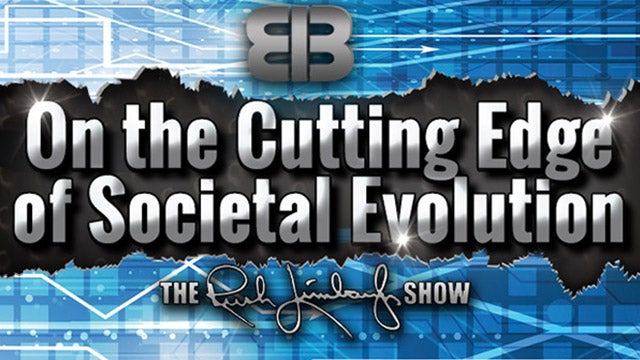 RUSH ARCHIVE: This is taking $250 billion that was not here and putting it in a giant syringe (Pfft!) and injecting it here. Plus, Apple’s other $350 billion. So here’s over half a trillion dollars that is going to be invested in the United States of America. What do you think the impact of that is going to be on other businesses and corporations around the world when the United States becomes the place to invest? All of this is going to happen this year. We are on the cusp, potentially here, of an economic boom the likes of which we haven’t seen…

RUSH: Now we take you to Davos — which, by the way, do you know what Davos is? (interruption) Yeah, but who’s there? It’s the economic summit of who? (interruption) Right! It’s the globalists. It’s the world’s globalists. It’s the world’s wealthiest. It’s the top 1% of the 1%, and the CEOs who work for them (and other slaves and people in indentured servitude to the 1%). They show up at Davos. It’s a ski capital. It’s always snowed in. Trump is going. And I just want to read to you before I get to the second sound bite which — hint, hint — is Maria Bartiromo.

The Associated Press: “Trump to Face Mixed Welcome at Elite Davos Gathering.” See, Trump is going, and this is going to be the equivalent of dropping a cherry bomb in the middle of things. Trump is going to show up and just totally blow the place up because otherwise the whole thing would be organized against him. It would be the establishment’s most elite conspiring how they can pick up where the FBI and the DOJ and Hillary Clinton blew it and continue the process of getting rid of Trump. In the midst of this, Trump’s gonna show up.

He’s gonna be bragging about America, and he’s gonna be telling them the place to go is America. Not Europe, not Australia, not South Africa, not Asia, not the ChiComs, not Haiti, but America. And that’s not what they want to hear. The crowd at Davos is treated every year — particularly during the Obama administration — to tales and stories about how the United States is properly weakening, and it’s only fair for the rest of the world that this should happen, and the United States is ceding — c-e-d-i-n-g, ceding — losing control over the world’s economy. 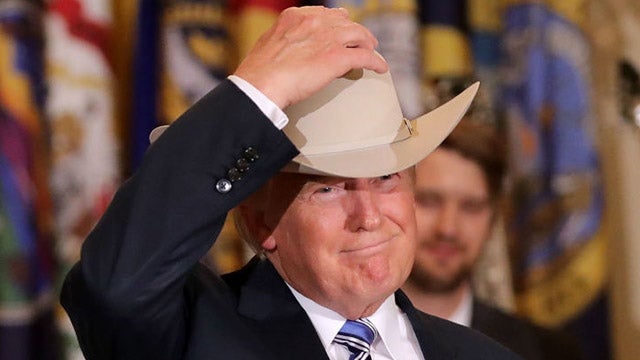 This is only right for the rest of the world to be able to say catch up. And Trump’s gonna go over there basically telling them, “Guess what? We’re back, and we’re stronger, and we’re gonna be bigger than ever — and if you don’t want to participate, it’s your problem, not ours.” But listen to this. “In Davos…” That’s it, not “Dah-vos.” It’s “Dav-oshhh,” like “Mee-loshhh” Forman. It’s not “Mee-lohs.” It’s “Mee-loshhh.” Madam Albright knows how to pronounce it. She had a crush on him. “In Davos this week, participants…” Now, who are we talking about?

Can you see Warren Buffett or Bill Gates or the Saudi prince Salman bin AbdulAziz bin Salman bin Muhammad (laughing) pretending to be refugees in Davos? “Or hear about ways to uphold the Paris climate accord and promote free trade. Or rub elbows with any number of leaders of African countries.” Those are the highlights of Davos! What a boring, dryball bunch of people! Experience the life of a refugee is the big attraction at Davos? Anyway, you heard what I just said. Here’s… Nope! Nope! See? I talked myself out of doing the right thing. I was gonna play Maria Bartiromo. We’ll have to wait ’til after the break.

RUSH: Okay, so yesterday, I predicted that Apple’s investment was going to signal all kinds of countries and corporations, companies, businesses, around the world to start investing in America again. But yesterday and this tax cut is just the beginning. It’s just the ignition. So we now take you to Davos this morning on America’s Newsroom, Fox Business host Maria Bartiromo… 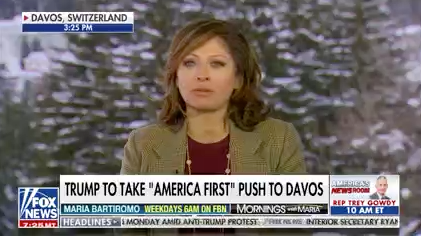 BARTIROMO: I was speaking with some businesspeople in Europe the other day, and they told me that they had a whole strategy to invest in Europe, and after the tax plan in the U.S., they’ve completely shifted their strategy, and now they’re shifting that money away from Europe and into the U.S. So this tax legislation that the president signed into law earlier this year (sic), this is shifting plans across the world. It’s not just benefiting America. It’s also changing direction for some money that was earmarked elsewhere. So it’s very powerful.

RUSH: We’re gonna go back to January 9th. This was shortly after Trump’s meeting with all the congressional Republican, Democrat leaders, House and Senate, where he televised for nearly an hour an actual meeting on what to do about immigration. Remember that meeting? He lets the media in. The usual, standard operating procedure is you leave ’em for five minutes, they ask a bunch of meaningless questions, you kick ’em out and the meeting starts. He never kicked the media out. And the meeting began. And it dawned on the Democrats the meeting had gone and the media was not leaving. You had Senator Dick Durbin sitting on Trump’s right.

You had Steny Hoyer sitting on Trump’s left, as Trump is sitting. You had Dianne Feinstein across the table. And this was this ongoing meeting with looked like everything on the table. And Dianne Feinstein said, “We want a clean DACA bill, and we come back later and we’ll do comprehensive immigration reform.” And Trump said, “Hey, you know what? I — I think about that, we can do that.” And Kevin McCarthy, “Ah, ah, ah, ah, ah! There’s no border protection in her clean DACA bill.” Remember, this was the meeting where a number of people thought Trump had caved. A bunch of people were very scared. “Oh, my God. Oh, no! Did you see this?

“Trump’s gonna give it away just to get a deal, just to get along with the Democrats. It’s the same old thing.” We were crying; we were whining; we were moaning. Some were. I wasn’t. I told everybody to be calm; the meeting had nothing to do with immigration, that it was about something else entirely: Countering the Wolff book that was out there with its lies and misrepresentations about Trump not even wanting to be president, not even wanting to win, being on the way to Alzheimer’s and dementia. And then I made an observation about this extended meeting on immigration.

RUSH ARCHIVE: [F]olks, you heard all during the campaign about Trump being The Art of the Deal negotiator, this brilliant, run-rings-around-’em negotiator. I’m just looking at Trump’s body language here (laughing) as he’s conducting this meeting. He’s kind of sitting there with his arms crossed and folded across his chest, and he’s got a serious look on his face as he’s listening to what these Democrats have to say. But he’s forcing, on the record, to say what they want in front of the media.

Senator Grassley has said, “We’re talking about everything, DACA to illegal immigration.” And he said, “Those who don’t vote to protect DACA kids will have to explain themselves.” So there’s-a-back-and-forth here on what to do about the DREAMer kids. But the Democrats want full-fledged amnesty on everything and threatening a government shutdown and all that. This is unlike anything I’ve ever seen. So Trump’s forcing the Democrats to tell people what they want, tell him what they want.

The media and Democrat radical left activists are beside themselves in disappointment and anger at Chuck Schumer and the Democrats for caving and not putting up a fight. And last night on the NBC Nightly News, Savannah Guthrie was filling in for Lester Holt, who was over there with the North Koreans doing something. She brought in Chuck Todd from Meet the Press to talk about the end of the government shutdown, and she asked Chuck Todd if the Democrats lost their nerve. 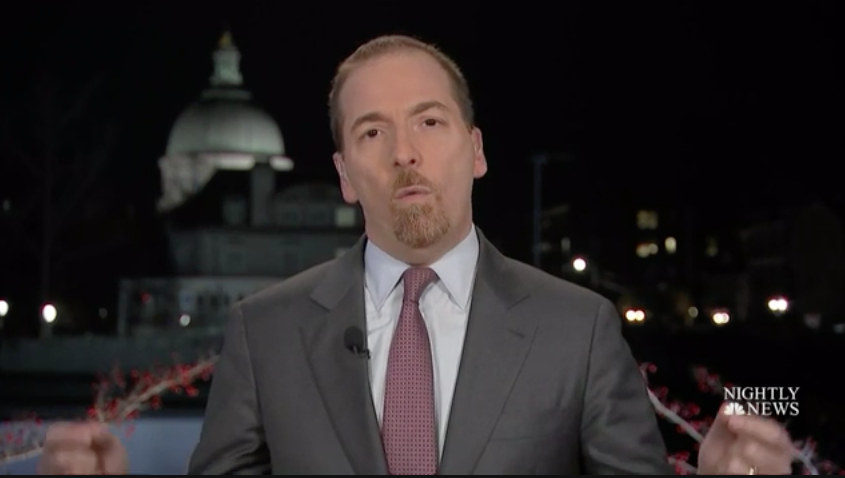 TODD: To put it in football terms, Savannah, I would say this was a false start. The Democrats showed their cards. At a minimum, he already knows he’s gonna get his wall from Democrats if he gives them DACA, and that in itself is already a small victory for this White House.

RUSH: So here we are two weeks later, and they just now figure out that what Trump was doing in the meeting was simply making the Democrats show their cards, something I told you the same day. Ergo: Cutting edge of societal evolution. Am I bragging? No. It isn’t bragging if you can do it! Braggarts are people that brag about it when they can’t do it or haven’t done it. This is not bragging.