The GOP’s Amnesty Problem and the NFL’s Ratings Problem

RUSH: We’re gonna start in Park Ridge, Illinois, with Jerry.  Welcome, sir.  Great to have you with us.

CALLER:  Hey, Rush.  Longtime listener.  How are you?

RUSH:  Glad to have you here. 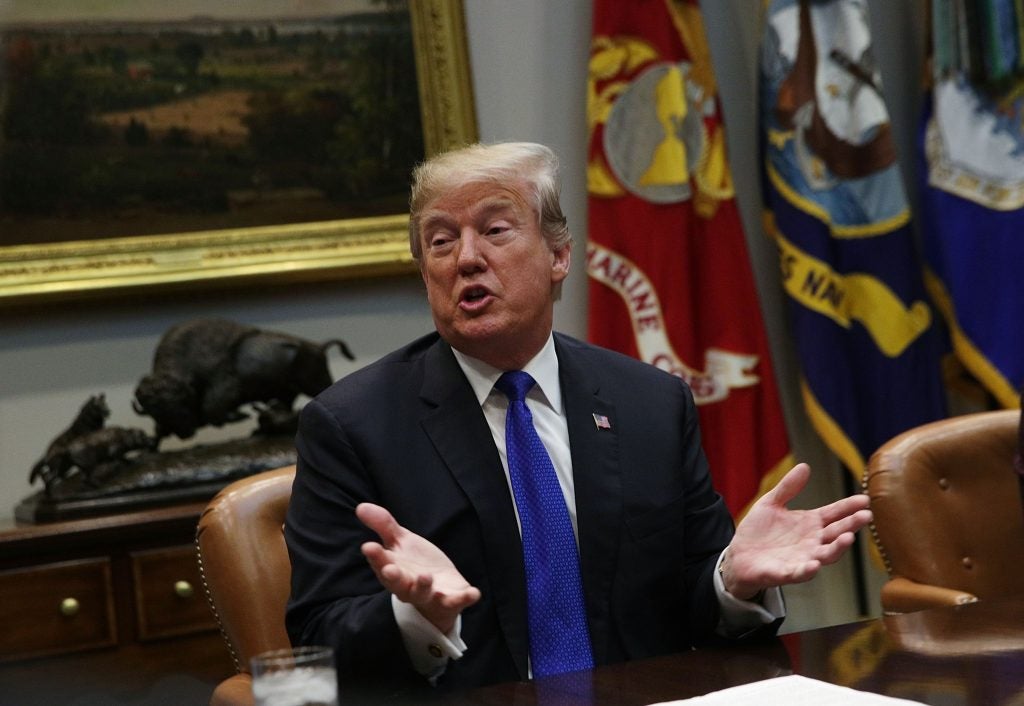 CALLER:  I told Snerdley that I think the answer to this whole DREAMer deal is to build the wall.  I watched the president on TV yesterday, and he made it perfectly clear that there’s gonna be no further discussion about chain migration, anchor babies, DREAMers, until Congress agrees to build the wall.  For the first time, in my opinion, in 12 months since he’s been president, he has the big end of the stick.  And it’s just such a wonderful feeling.

RUSH:  Did you get the impression watching the president he was actually childlike and stupid?

CALLER:  Oh, no.  That’s just silly.  He’s the smartest guy in the room.  Like you said, sometimes I act childlike and stupid, but that’s just youthfulness.  I also mentioned to Snerdley that — you have brought this point out many times — let’s let the DREAMers stay, build the wall, say they can’t vote for 20 years, and see the reaction from the Democrats.

RUSH:  Well, you know, that was one of my arguments made some years ago.  You know, when I had… You know, there was all kinds of pressure applied to me out there, Jerry. I mean, the White House — the Bush White House — sent emissaries twice to try to get me convinced to join amnesty and so forth, and there were others. Lindsey Graham made an appeal.  I said every time they’d come up, “If you can promise me that all of these new arrivals cannot vote for 25 years, then I might think about signing up with you,” and they would not even entertain the idea, and thereby demonstrated what this is about.

CALLER:  Well, everybody knows all it is is vote for the Democratic Party.

Cheap labor’s gonna go out the window because there’s gonna be a competition for good employees, and employers are not gonna have jobs that they can pay very little for.  It’s gonna… When this economy really kicks in later this year — and it’s trending in that direction now — this corporate tax rate reduction changes dramatically this whole idea that Chamber of Commerce members need illegal immigrants for cheap labor.  They’re not… Cheap labor is not gonna be the answer to their problems going forward. Qualified, competent labor is, as competition sets up, as businesses start to grow.

CALLER:  I think it was last week that the president was on TV, and he was just kind of going through the Rose Garden.  He said, “When we get done with DACA, the Hispanics are gonna love me.”  I know you’ve brought up throughout the years that the Democrats think that the Hispanic vote is a given.  But there’s quite a few — a great deal of — Hispanics that are as Republican as can be and as conservative as can be.  And I think that vote is just taken for granted.  I think it’s a foolhardy mistake to the Democratic side.

RUSH:  Yeah, but let me tell you something.  It can be a mistake for Republicans to make a wrong assumption too.  Let me… (interruption) No, no.  Let me give you… By the way, before I get into this, I need to ask you… I was just reading.  Drudge has a story up there from the Wall Street Journal that says that smartphones are not selling as rapidly as people thought because they have finally gotten too expensive.  And they cite the iPhone X.  It’s just too expensive out there and the Wall Street Journal’s perspective is this is really hard (chuckling) on the companies that make components for the phones.  That’s, course, the Journal’s perspective.  So I was gonna ask you: Have you not bought a new phone lately ’cause it’s too expensive?

CALLER:  Um, yes and no.  I have… It’s hard to believe, but I have a four-year-old iPhone 5 that works, and there’s just no reason to replace it yet.  But —

CALLER:  Funny you say that ’cause I listened to you yesterday. Well, I listen to you every day.  I had to replace my battery about 90 days ago.

RUSH:  Okay.  Well, there you go. Now your 5 is acting almost like it was brand-new, right?

CALLER:  It is.  But what would happen is if I was on the phone… If I made a six-minute phone call, it would go from 100% to 17% in a heartbeat.  But locally here in Chicagoland, I replaced the battery for 50 bucks, which is the bargain of the century, and now it acts like a brand-new phone.

RUSH:  Right.  There you go.  Okay.  So I was gonna offer you a new iPhone X, but it sounds like you don’t need one.

CALLER: (stammering) I’ll claim it on my taxes.

RUSH:  Who is your carrier out there?

RUSH:  Okay.  I have an AT&T version I’m gonna send you, and it’s an iPhone X.  So you hang on.  I’m gonna give you the analogy that you just made: The Republicans and DREAMers and illegal immigrants and so forth.  I’ve got a great one coming up here.  In the meantime, don’t hang up so that Mr. Snerdley can get a shipping address for you for us to get you the new iPhone X.  He’s AT&T. Make a note of that. I think we got four of those left in there.  Now, here’s the analogy.  There’s a story today I think it may even be… I don’t know where it is. 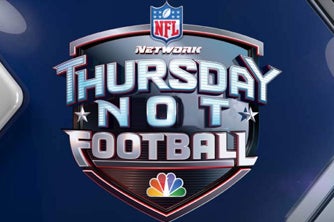 I saw a link to it on a blog.  Doesn’t matter.  It’s an official story on how ratings for the National Football League are down for the second straight year, and for this year they’re down more than they were last year.  The story is replete with NFL executives explaining why they think this is.  The consensus belief among NFL executives as to why NFL ratings are down is Thursday Night Football.  All of a sudden — all of a sudden — there’s too much football.

The NBA’s games are sold out and the NBA’s TV ratings are skyrocketing and the NBA plays six days a week.  There’s many more than one game six days a week in the NBA.  By the NFL’s explanation, the NBA should be so overexposed that nobody would be tuning in and nobody would be attending because there’s just too much of it.  So the NFL people are making a calculated mistake and an error, and they are assuming that there are systemic reasons why people are not watching, and they are missing the big one.

The big one is people are tuning out the NFL in growing numbers because it’s personal.

The idea that people are not gonna watch football on Sunday ’cause there was a game on Thursday? They think Trump is stupid? How dumb do you have to be to be in charge of a league to believe people aren’t watching your game on Sunday, Sunday night and Monday ’cause there’s a game on Thursday? Besides, there have been Thursday games for a number of years, and during the early days of the early years of Thursday night games the NFL was going through the roof.

Everybody knows, but doesn’t want to admit it, that it’s the flag protests, it’s the taking a knee. There’s some other factors too. The stars have been hurt. There’s any number. But it’s the league’s reaction. It is the executives of the NFL reaction to the kneeling and so forth that it’s further distancing fans from the game. It’s a personal thing for people.

Well, now, the analogy here to the Republicans, the Republicans think that if they come out and support amnesty, that they’re gonna get a certain percentage of illegal immigrants voting for them because they’re gonna see Republicans loyal to Hispanics. It doesn’t work that way. Republicans aren’t gonna get any goodwill votes. But they think so. But that’s not how those votes are gonna be secured. The way to get those votes is to stop the Democrats from getting them by stopping illegal immigration! It’s no more complicated than that.

There’s no compromise with the Democrats. There’s no letting them have their policy and then hoping to get 20 or 30% of the illegals to register as Republicans. There is only defeat of the Democrats and defeat of their policies and an elimination of the open borders circumstance to the United States, which happens to be the primary reason President Trump was elected. This is how we’re gonna lose our culture. If we lose our culture, we’re gonna lose it by virtue of allowing people from all over the world to come here but not become Americans, to not assimilate. Which is exactly what the Democrat Party wants.

The Democrat Party wants traditional America torn down and transformed, and that is a quote from Barack Hussein Obama. That kind of thing needs to be defeated and stopped. The idea that we can agree to the policy and show some bipartisanship and then hope by virtue of goodwill that 20 or 30% of the arriving illegals will somehow register Republican, that is absurd. And it’s not Trump that thinks that. And that’s a really stupid thing to think, and it’s a really stupid policy to have. But it isn’t Trump’s.

If the NFL wants to fix their ratings problems, they’re gonna have to find a way to remove liberal politics as an identifier of the NFL. They’re going to have to do that. They’re gonna have to find a way to take the NFL back to what it was, something that was walled off and immune from all of that because people get enough of that Monday through Saturday. Other things like keeping the stars on the field, that’s of course another consideration, but the idea here that football on Thursday night — (laughing) I marvel sometimes at the people who end up running things as experts and how little they actually know.