RUSH: A couple recent examples of political correctness. I don’t know how many of you use Google Maps, but Google Maps just issued an update to the app that they had to withdraw in less than 24 hours. Google Maps included a new feature. And let me describe it for you. 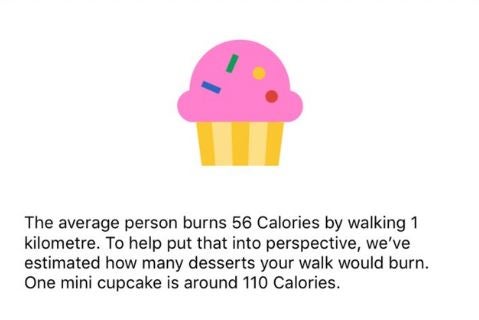 Let’s say you’re in Manhattan and you need to go from point A to point B, and you put those addresses in, and it calculates your route and tells us how long it’s gonna take you to get there if you’re driving or if you take public transit or if you’re walking. They added something new. They put a little bubble next to the map showing your route that said if you walk, you’ll burn this many calories. If you walk these eight blocks, it said you’ll burn 35 calories. And then it listed the caloric content of several foods, like a piece-of-pie has 250 calories or whatever.

Do you believe this? Do you believe we have this much insecurity lurking on Twitter that people could be shocked and outraged and made to feel scared and pointed out and shamed simply because of the amount of calories you would burn if you walked the route happened to be displayed? Google thought they were performing a service. Look, I got no beef with Google. Don’t misunderstand. I couldn’t care less one way or the other. I don’t use Google Maps. Not the point.

Who are these people? What in the world has gotten into them that they cannot look at a bubble that shows how many calories they would burn by walking eight blocks without having an overreaction demanding that the app fix itself and take that bit of information out of it because it’s fat shaming. I mean, it just boggles the mind.

I’ll tell you what my reaction would be. Why are you throwing money away on that instead of giving everybody raises? What do you need a VP of diversity for? Isn’t is that part of the corporate culture anyway? It’s like why do companies need vice president of environmental policy? All of this is a sop, all of it’s a sop to the media. All of its a sop to left-wing, politically correct snowflakes.

Anyway, let me tell you what this woman did. She did something that’s actually very smart, filled with common sense, but it violated every tenet of diversity. And in the process, Denise Young-Smith inadvertently forced everybody to admit what diversity really is. These people that run around talking about America’s strength is in our diversity, and what do they mean by that.

She said there could be 12 white, blue-eyed, blond men in a room, and they’re going to be diverse, too, because they’re gonna bring a different life experience and life perspective to the conversation. Each one of them is different, and they’re gonna have their own take, and even in such an arrangement, you could have diversity. The internet blew up! This woman was held up as an example of the absolute worst example of somebody as a vice president of diversity and that Apple needed to fire her.

So she did what everybody would expect and she apologized and she begged forgiveness. She said that this is obviously insensitive and it was erroneous and she wasn’t aware, didn’t know what had come over her, but she will not make this mistake again.

And what Denise Young-Smith did was openly and inadvertently cause all of these politically correct numskulls to admit that diversity has nothing to do with anything substantive. It has everything to do with things people have no control over. And so the next time you hear people say, “Well, what makes America great is our diversity,” it doesn’t. The diversity they’re talking about, skin color and racial diversity or sexual orientation diversity or gender diversity doesn’t mean diddly squad in terms of substance, because that first statement is exactly right on the money.

I’m trying to figure out how she got hired if she thinks this way because Apple, I mean, they lead the league in politically correct statements, behavior, thinking and so forth. And this clearly does not fall under the rubric of political correctness. Twelve white blue-eyed blond men in a room and they’re going to be diverse too because they’re going to bring a different life experience and life perspective to the conversation.

Now, if Apple thinks that having a diversity of life experiences and background is important, fine. But then why use skin color, national origin, or sex as a definition of what people grew up to be? How in the world is that — what a skimpy and what a narrow and what a limiting way to define people! By virtue of the color of their skin. And look who’s doing all this. Your good old buddies, the Democrats and the leftists.