A History Lesson on the Second Amendment

RUSH: You know, yesterday on this program we talked about Bret Stephens and his column in the New York Times, the former columnist for the Wall Street Journal, who is thought to be a conservative. After the column yesterday, a lot of conservatives began wondering what’s happened to Bret Stephens ’cause there’s nothing conservative about the column. Actually, it was really kind of a loosely assembled almost like stream of consciousness rather than a crafted and prepared column. And it seemed something written in frustration.

Well, we nuked it yesterday and dealt with it, but over at National Review, Charles C. W. Cooke was greatly bothered by this piece and wrote a post at The Corner blog that I want to quote from here. Not gonna read whole thing. But there is some excellent history in this, some excellent history that I will guarantee most Americans do not know about the Second Amendment.

RUSH: Charles C. W. Cooke and his piece at National Review. This actually ran yesterday. He starts out by saying: “Stephens is not a stupid man, and nor is he unaware of the reach that tyrannies have enjoyed. On the contrary, his is often a welcome voice in the fight for the liberty of all people. This being so, it is remarkable how blithely he elects to invoke Madison as a friend to his cause,” of repealing the Second Amendment.

“In truth –” and here’s where the history lesson begins, and tell me how many of you knew this when I finish. “In truth, the Second Amendment was not an “amendment” at all, for, unlike some of the subsequent alterations to the charter, it represented neither a change in policy nor a remedy for an error.”

“Along with the rest of the Bill of Rights it was the product of a disagreement as to how to best protect freedoms that were generally considered unalienable.” The founders believed that rights and liberty came from our creation and not men, not government, not other people. And that’s what made them inalienable. Meaning, you can’t lose them. You can be deprived of them but you can’t lose them, they’re there always.

“For reasons outlined in The Federalist Papers, Madison believed that the power of the federal government would be constrained by its structure; if the central state had only a handful of carefully enumerated powers, he contended, it would not be able to exceed them.” And that’s in fact what the Constitution is. It enumerates what the government cannot do. It spells out what the powers are and none more. Now, the anti-Federalists disagreed with that. “They demanded,” as it’s written here, “a belt to add to the suspenders. The debate that followed was strictly structural — not a fight over speech or due process or arms, but over how best to ensure the maintenance of ancient liberty.”

This is what the Constitution is, a charter of liberty and how to maintain it. So any time somebody starts talking about getting rid of that part of it or that part, you’ve gotta really perk up and say, “No way. We’re not gonna sit here and let you chip away at our freedoms,” which is what the anti-Second Amendment crowd wants to do. 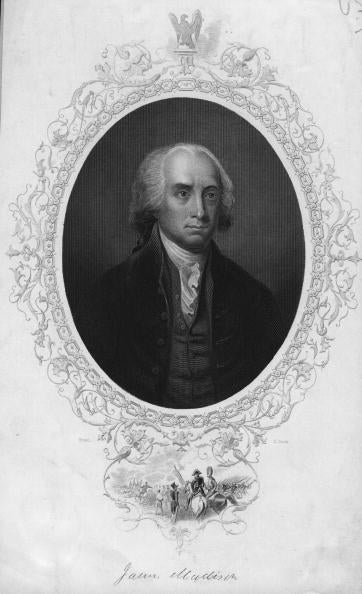 “Madison acknowledged this when introducing the Bill of Rights in Congress. The rights he had included, he made clear to his peers, were those ‘against which I believe no serious objection has been made by any class of our constituents.'”

In other words, the Bill of Rights was a listing of things that were not controversial. The Bill of Rights were things which he had heard no serious objection to by anybody — freedom of speech, freedom of religion. Nobody objected to any of them. So he said: “Let’s list them. Let’s enumerate them.”

“In encoding the right to bear arms among the set, neither Madison nor his opponents were innovating.” It was already the presumed natural way to live then at the time. They weren’t innovating, they weren’t changing anything, they weren’t protecting or guarding. They were just codifying the liberties and freedoms that were considered proper at the time. “They were channeling Justinian, Locke, and Blackstone, and ensuring that the people of the new country would enjoy a robust right to self-defense, and the auxiliary protections that enabled it,” i.e., arms.

“Surely, Stephens insists, if Madison could see the modern world he would change his mind. I must venture that the very opposite is true. Were he to pick up a history book today, Madison would be shocked indeed. But his surprise would be at the sheer scale and disgrace of the tyrannies that have scarred us since he died. The American Revolution was a beautiful and necessary thing, and yet if one were to have read the litany of complaints to a man in the Warsaw Ghetto, or in Dachau, or in the Gulag … he would have laughed in your face.”

In other words, there was real tyranny back in the day this country was founded, and to spell out these things would have made people in tyranny laugh because they were so simplistic. But that was their value. But his point, Madison would cringe if he saw the tyrannies that have come to exist in America. “Tyrannies” loosely defined.

It is a document dedicated to defining and guaranteeing and protecting the freedom of the people of the United States of America. It is not a document that tells the government what it can do. It’s a document that proscribes the government from doing things that would chip away at liberty. The Second Amendment people love to tell you that if the founders came back today they would be outraged at how many guns and they would demand that the Second Amendment being repealed.

And it’s actually just the opposite. What the founders would be stunned at — they wouldn’t be stunned, actually. They would be saddened. They expect it because of history and because of human nature, they expected governments to grow, including ours, theirs. They expected it to become oppressive. This is what human history was: oppression of people, tyranny, dictatorship, poverty. That’s the uniqueness of the Constitution.

So the truth is James Madison and these other founders who had a direct hand in either the Declaration or the Constitution would be aghast at the size of the federal government. They would be — catch myself again. They wouldn’t be surprised because they expected it. It’s what they were trying to guard against. They would be mad, angry, saddened, but not surprised.

The framers of the Constitution, their first thought, it would be clear that the Constitution was all the government could do and no more. Others decided they had better make those limits more clear, and that’s what the Bill of Rights is, the Second Amendment, the 10th Amendment, the first, all 10 Amendments are constraints on the government specifying how the government is limited in those fields. And the Second Amendment was not an innovation, it was not a change, it was not a reaction to something either popular or unpopular. It was simply a natural, it was a given, as all the others were.

Now, this isn’t taught anymore. And one of the reasons why is that many leftists think the Constitution is a horrible document because it limits people who believe in government first, second, third, and always. It is called a charter of negative liberties by many leftists because it doesn’t tell government what it can do; it tells government what it can’t do. And so from all the way back to on FDR we’ve had this concept of a second Bill of Rights that could spell out what the government could do.