What If Mueller Can’t Find a Crime?

RUSH: The Mueller investigation, there are a lot of things about this that are being whispered but not being said. I was in a chat with a buddy last night who’s very upset about this NFL thing. He thinks Trump ought to be doing totally different things. This NFL thing is a waste of time. The guy said to me, “Is this what Trump wants to be known for when this is all over? Look at the time he’s wasting.”

Now, this guy cares only about tax cuts. It’s the only way he thinks in the rest of his life that he’s ever gonna have any more money in his pocket. He can’t earn any more; he’s maxed out in what he does. And it’s a philosophical thing too. He doesn’t think the government deserves this much money from him or the rest of us, and you wouldn’t either if you saw a list of every tax you pay — local, city, state, federal — if you saw a list, your phone bill, your cable bill, if you saw a genuine list of the taxes you paid, you’d revolt.

This guy knows, and he’s fed up. And he supported Trump because he believed Trump on the wall and Obamacare and tax cuts, and he thought tax cuts should have been the first thing. And now he’s watching Republicans say they can’t repeal Obamacare and they may not get their tax cuts and now the top marginal rate may not go down below 35, it’s at 39.6, and this guy is — I wouldn’t call him despondent, and he’s not ready to cut Trump loose. He’s just frustrated. He thinks there’s all kinds of stuff Trump could be doing.

He wrote back said, “Really?”

I said, “Yes, this cultural rot is the number one problem I think we’ve got, and precisely because nobody’s talking about it. Everybody’s trying to make peace with it. We’re being lied to by the left about their objectives: unity, equality. That’s the last things that they’re for.”

And so he said, “Well, you know what, this Mueller thing, Trump’s gonna get impeached soon. That’s what this Mueller thing’s all about, and if he doesn’t get something serious done, he’s not gonna have a legacy to speak of.”

And that’s when I said, “I’m not sure I agree with you on that, either.” And I said, “Don’t forget something very, very important here, and that is Donald Trump runs the Department of Justice.”

I said “Donald Trump runs the Department of Justice.” Now, let’s look at the Mueller investigation. I have a story here. It’s at Gateway Pundit. Headline: “Mueller Investigation Desperate As More Information About Obama’s Illegal Spying Is Uncovered.”

They had nothing but allegations of collusion with the Russians based on a phony dossier put together with Democrat operatives working with the Russians. You know, the golden showers dossier. There’s nothing in it that’s true, and it forms the basis of the Mueller investigation. It formed the basis of the Obama effort to get Trump investigated in the first place. There’s nothing there. And Mueller hasn’t found it.

Now, my point here is that I wouldn’t be surprised if the Mueller investigation is discovering some of this stuff and they’re frustrated. This is not what they want to find. They can’t find any Trump crimes, is what I’m hearing. They continue to search in vain for a Trump crime.

There’s another story. New York Magazine. This is from our old buddies at NewsBusters. “Did New York Mag Admit Mueller Investigation Is a Fishing Expedition? — Yesterday’s New York magazine had the best summary of the state of the Trump-Russia collusion investigation by Special Counsel Robert Mueller yet written. It was contained in a single paragraph buried deep in an article with no other surprises so you have to look for it. 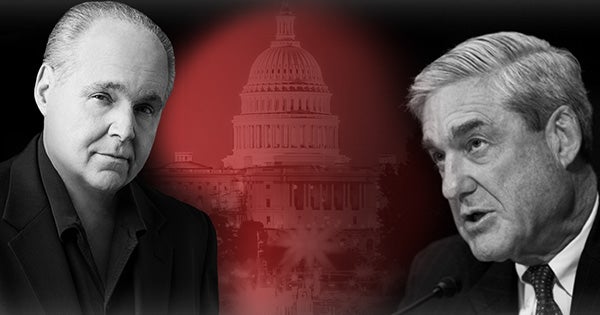 “Yet despite having to wade through material which basically tells us what we already know about that investigation, that one paragraph is so stunning in its revelation amid an otherwise routine summary of what Mueller is possibly up to, that it hits the reader like a hard slap across the face. Before reaching that revelatory paragraph, New York magazine correspondent Cristian Farias reminds us that it is quite extraordinary that a private citizen, Paul Manafort, was secretly surveilled twice via FISA warrants.”

FISA warrants are for international terrorists, criminals, foreign agents. But the New York magazine guy says it is quite extraordinary that a private citizen was secretly surveilled twice by FISA warrants. It is stunning. It confirms that Trump was fairly close to being right when he claimed that his wires in Trump Tower were tapped.

Now, the writer at the New York Magazine also “lets us know that it would probably be wise for other possible targets of the Mueller investigation to obtain lawyers even if they have nothing to hide,” which is also true. Now, here’s the paragraph. Now, the reason I mention this, even a New York Magazine writer reveals — this is really odd. Two FISA warrants on a private citizen that had surveillance operations going on at the residence building of Donald Trump? That’s kind of odd. Then this is the revelatory paragraph.

“One individual who is familiar with an aspect of the Mueller inquiry but asked to not be named told New York that, unlike other federal probes that he’s seen in action, where prosecutors build their cases from clear allegations, this one feels different. ‘This is a backward investigation,’ the individual said. ‘You don’t have a crime.'”

So an individual familiar with the Mueller inquiry told New York Magazine there isn’t a crime. Now. Not in the beginning, there isn’t a crime now. They haven’t found a crime! He continued. This is a backward investigation. You don’t have a crime. “You’re searching. And so you’re not really sure exactly what you’re searching for. So you start asking around and you see what comes up. And you start creating a paradigm and you see what else comes up and figure out at some point whether or not there’s a crime.”

That paragraph did stand out to me when I read this whole piece. There is no crime even now. But they have to be, the Mueller people — and I know they’re all Hillary and Obama people. Don’t misunderstand here. But as deep as they’re digging, they have to have uncovered some stuff on the Democrat side. I remember some people theorized this might actually happen when this all got started, that there isn’t any crime, there isn’t any collusion with Trump and Russia and all this, but there is a whole bunch of shady stuff that happened on the Democrat side, and you start pulling back the covers you’re gonna find it.

So what do they do if they find it? Trump runs the Department of Justice. He can be told anything he wants about what’s going on there. I told my buddy last night, “Don’t give up the ship yet. It’s entirely possible this thing’s gonna end up the exact opposite of the way you’ve been led to believe, that Trump’s gonna be impeached. And they still want to do that. But what if the evidence produced actually points fingers at Democrats?”

You know there’s a theory going around? See what you think of this. The theory going around, the real reason Trump’s doing this — and by the way, it’s not that he’s mad at the NFL ’cause they wouldn’t let him buy a team. You know he used to own the New Jersey Generals, U.S. Football League. That was a football league that competed with the NFL back in the eighties. They played in the springtime.

He owned the New Jersey Generals and his star player was Herschel Walker. He wanted to get into the NFL then and they said no. But when the Buffalo Bills were sold to the Pegulas, Terry and Kim Pegula, Trump made a bid, and he was rejected. A lot of people think that Trump is like a child and that when these guys — these powerful owners that he wishes he was one of — rejected him, he’s said, “Oh, yeah? Oh, yeah?”

This happened, by the way, before Trump was president, obviously. I don’t think it’s that. Although with Trump, it could be. I don’t think it’s that. What do you think of this? What do you think that Trump is engaging in various things to really cement the support of his base in the event there are impeachment charges? Remember, the media’s been doing everything it can to separate Trump supporters from Trump, and they’ll fail every time because they had nothing to do with creating that bond. They can’t break it. Only Trump can.

What if…? Trump knows his audience. He knows what he said about the NFL is going to be very well received by a significant number of NFL fans. He knows that his supporters are gonna be echoing it and supporting it, no problem. What if he’s trying to buy impeachment insurance, for lack of a better term? What if this is all about Trump really just continuing to build and hold that bond he has with his supporters? “But, Rush! But, Rush! That wouldn’t matter in impeachment. Your public support doesn’t matter.”

You impeach somebody with positive approval numbers… Look what they tried to do to Clinton. It didn’t work. It does matter. It does matter, ’cause everybody involved in it’s gonna have to run for reelection themselves down the road, and if they go after somebody with universal popularity or majority approval, it could come back and backfire on ’em. Like, I’m convinced that’s why Lindsey Graham is who he is today. He was one of the House managers that ran the impeachment proceedings against Clinton, and there’s some others. They felt very embarrassed about it and they took it on the chin because the Senate never seriously pursued it.