RUSH: Well, this is not gonna make my buddy happy. I just had a news alert here from the Wall Street Journal: “Republican Tax Plan to Allow for Top Individual Rate Above 35%.” Right now, it’s 39.6%, and when my buddy learned that it might be lowered to 35%, he was… Ah, he was okay, but it was not what he was expecting. It’s not what he thought Trump was gonna do. Now when he finds this out, it’s not gonna be pretty. I’m gonna hear about it. “Republican Tax…” I haven’t had anything to do with it, but I’m gonna hear about it. 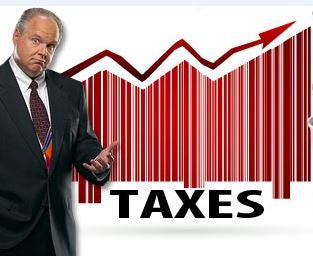 Wall Street Journal news alert: “The Republican tax plan being released [tomorrow] will open the door to a top individual tax rate that is higher than the 35% that has been in previous plans, according to two people familiar with the discussions.” I need to remind all of you in the 39.6% bracket that this is what populism is. The vast majority of people aren’t anywhere near that 39.6% rate. It’s more than you think, but not a majority. “Tax cuts for the rich” are not populism. They are conservatism, but they are not populism.

In populism, you fire your shotgun and try to hit the majority of people no matter where they are, no matter what they think. The root of the word is “popular,” and if a majority of people want a wall, you say you’re for a wall if you’re a populist, whether you’re a conservative or a liberal. That’s what populists do. So populism is for cutting everybody else’s taxes, but the rich have got to “pay their fair share.” Now, obviously, that’s a liberal view. It’s a liberal way of looking at things, but it also happens to be the populist way, supposedly.

I mean, given the mind-set of the American people now. I’m gonna find out more about this as the week unfolds. This is just an example. The Republican Party, they just could be doing so much. They could be scoring so well. They could be just running the table. They could be setting themselves up for power for a generation, and they are not doing it. And it’s just sitting there! It’s just sitting right in front of them. All they have to do is grab it.