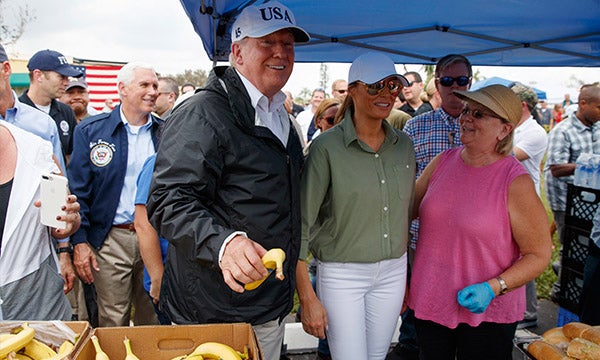 Here in Florida, I can tell that Florida Power & Light is so far ahead of schedule in restoring power. I mean, we got it back in four days when we were originally told it could be many weeks. Some people were told the power plant servicing them was seriously damaged and it could be months. But I think over 75% of the people that lost power have had it restored. I mean, it’s still a disaster in many places, but some of the flooded areas, say in Miami, the floodwaters have receded faster than the media suggested would be the case.

Because I’m here to tell you, if there were any problems, if there were people being left out, if things weren’t being improved and improved rapidly, then the Drive-Bys would be all over it, and you’d be reading about it. There would be columns, and there would be stories, and there would be panel discussions on the incompetence of Donald Trump. “He just doesn’t know these things,” they would say. “He just doesn’t have the experience,” they would say, “of dealing with a bureaucracy like this.”

And apparently, Donald Trump has real-world experience at building a lot of things and rebuilding a lot things and dealing with disasters like this. And the very absence of any news about this is the truth and the indication. So Trump’s approval numbers are ticking up, in large part, because of the aftermath from the hurricanes. And the UN speech, I guarantee you when they start polling on the approval opinion of Trump after that U.N. speech yesterday, it’s gonna skyrocket. Well, I shouldn’t say skyrocket. But it’s going to trickle-up. It’s gonna move up after that speech yesterday.

And the disconnect on that is breathtaking to behold. You listen to people in the aforementioned establishment — and you can do that by watching anybody in the Drive-By Media — and they think it was embarrassing. Trump overall is embarrassing. His speech was embarrassing. Ew. It embarrassed us, say the Drive-Bys. It embarrassed us, say the members of the establishment. And they want to immediately reach out to their diplomatic brethren in other countries and apologize and say, “Please don’t hold it against us. We didn’t elect him, and we don’t support him. Please, please, do not think he’s speaking for us.”

But yet the Soviet foreign minister praised the speech as one of the greatest of all time that he’s heard. And you know Trump, we played the audio sound bites of this. Trump just literally savaged socialism in that speech yesterday. And in his example he cited Venezuela. He said the successful implementation of socialism is exactly why so many nations are failing. He said it’s not the unsuccessful implementation, it’s the highly successful.

Now, if you missed our Morning Update today, there is literal mass starvation in Venezuela. Now, stop and think of this for a moment. Venezuela, before Hugo Chavez, used to be a fairly decent place to live and it was a fairly decent up-ticking economy, and it was rooted and based in oil. They’re an oil-rich nation. Hello, Hugo Chavez, avowed socialist, gets elected, succeeded by his handpicked fellow socialist, Nicolas Maduro. And now literal — this is not just a term being tossed around — literal mass starvation.

So, anyway, the Venezuelan representative of the United Nations shows up to respond to Trump’s speech yesterday, and he said unknowingly, just another indication of how out of step all these people on the left are, “What was that? What was that? Was that Ronald Reagan brought back to life? Do we have to listen to Ronald Reagan again?” Damn right, Mr. Ambassador, damn right that’s what it was.

But he thought it was a great insult to call Trump Reagan. You know, Reagan was an avowed anti-socialist and anti-communist. And also didn’t care much for Hugo Chavez, people like him. So here’s this ambassador ripping Trump as being an incarnation of Reagan not knowing that over half the country is hearing it and applauding it.

RUSH: Where we gonna start here, Mr. Snerdley? Well, that would be Fred in Cleveland. Fred, I’m glad you called. You’re up next. How you doing?

CALLER: Okay. I have two quick points. The first thing, you were talking about Hillary. I believe that as more comes out, then the more unmasking and what have you, she’s going to turned on by the Democrats because she’s going to be so poisonous. She’s gonna be the most hated woman in America in six months.

RUSH: Well, she’s already the most cheated-on woman in America, so you’re probably —

Now, the Senate’s working on health care, and Lindsey Graham says, “Hey, we’re gonna get 50 votes from this, we’re gonna get it.” And they’ve entered a trillion and a half cut, tax reform plan as well. But up to now they have been studiously avoiding, seriously avoiding doing anything to help advance the Trump agenda. And I have been of the opinion if they don’t get a grip on things, they could lose the House. Not because people gonna vote for Democrats; people don’t like the Democrats, either. The reason Republicans having wing is two reasons. Donald Trump and people are fed up with Democrats. But it’s not because people have been voting for Republicans, because Republicans haven’t been honest. They’ve been promising and it is not delivering.

And as long as the Democrats continue to be more disgusting and disliked than Republicans, then Republicans are gonna win. But it need not being this way. It could be the way you’re describing if they would just, for three months, try to get some of this stuff done. Nobody would have ever seen anything like it, if they would for three months just try, be serious about it.

CALLER: I agree. I agree, Rush. I think the American people are too smart. I don’t think the Republicans could lose in ’18 even if they tried. This isn’t about Republican-Democrat. This is about giving Trump the power to push this country forward. And if Paul Ryan won’t do it, if McConnell won’t do it, then the American people will put five more Tea Party guys in there or five more conservatives on the other side in there. You know what I mean? What can we do? Say, “No, we’re not gonna vote” and then let some loser Democrat squeak by? We will force the Republicans to win, and we will force them to do what Trump wants to do.

RUSH: Well, Fred, I appreciate the call, and I very, very much appreciate your sentiment there, and I hope that there’s something to it. I am of a similar thinking on the 2018 midterms. There’s two schools of thought out there when you talk to seasoned political professionals, seasoned political scientists and analysts and think tankers and so forth. One school of thought — and really, this is not analysis; this is desire. There’s one school of thought that says the country hates Trump, the country realizes what a mistake they made and they want adult leadership back. But what they want most of all is to have somebody to make sure Trump doesn’t succeed. And of course that, to them, means the Democrats are gonna win big and maybe even take back the House.

The other point of view is closer here to what Fred said but for different reasons. And it is rooted in the fact that the Democrat Party is in the tank and doesn’t know it, and even if they do know it, they’re not doing anything to help themselves. With Hillary Clinton front and center, that’s nothing but a negative and a drag on the party. And the same thing with Crazy Bernie. And you might think, “Crazy Bernie? They love Crazy.” Do they? You look where Crazy Bernie campaigned. Kimberley Strassel made this point. You look where Crazy Bernie campaigned, in all these states, they say Trump just won by 40,000 or 70,000. “If 70,000 votes had changed,” it’s always a Democrat lament.

John Kerry, after 2000, “If we’d have just won 55,000 votes in Ohio, I’d be president.” Yeah, but he didn’t. And 55,000 is not an insignificant number. It’s not a close election with 55,000 votes. But they’re saying that Crazy Bernie is the future of the party because the party’s far left. But Crazy Bernie, outside of his own campaign, he had no coattails. Crazy Bernie didn’t bring out anybody.

Now, Crazy Bernie’s voters were very angry at Hillary, because Hillary had rigged the election against Crazy Bernie. But even at that, Crazy Bernie couldn’t cause coattails. He’s not the answer. Joe Biden’s not the answer. The Democrats’ history is, outside of Obama, they are losing elections, and there’s nothing changing on that. Trump is the wild card in the equation. And he’s ticking upward right now. I think it looks bad for them no matter what.

RUSH: By the way, on the Trump approval numbers, 80% of Republicans now approve of Trump in this poll. His overall approval rating, 43%, but among Republicans, 80%. Now, Mitch and Paul don’t like seeing that. But, I mean, that is why, that’s all-in, that is why they need to wise up. But the establishment is a powerful thing. And I’m telling you, they fear being excommunicated. They fear being ostracized. I am not kidding you.

They see what’s happening to Trump. They see what Mueller is doing. They see what the deep state’s doing. The real power in Washington, D.C., is in that club, the establishment, the elites, whatever you want to call it. But despite that — and, by the way, this number, this 80%, that is before the U.N. speech. It’s in TheHill.com: “President Trump’s approval rating is ticking upward following his response to two major hurricanes and his bipartisan negotiations with Democratic leadership.”

Remember, I told you the Morning Consult poll, Trump voters don’t care that he’s working with Chuck and Nancy. They love and believe and trust Trump. And if he’s gotta work with Chuck and Nancy to do his agenda, they’re gonna support it. There isn’t any party loyalty here that’s guiding this. But when you get down into the actual voters, 80% of Republicans now approve of Trump. That and the election returns are all anybody needs to begin the enactment of Trump’s agenda.