The Establishment Must Destroy Donald Trump

RUSH: The Paul Manafort situation is continuing to unfold. Manafort has kind of thrown down the gauntlet at Mueller and said, “Look. I got nothing to hide. Release what you took out of my house. Make it public. You got nothing. Let everybody know what you got.” Talk about harassment. It is clear what’s going on with Mueller, which takes me to the first sound bite. I just want to play this for you because it’s an echo, it is a Limbaugh Echo. I have been pointing this out since Trump was elected. I’ve been pointing it out so many times that many of you probably, when I get into it, “Come on, come on, we’ve heard it, we got it, move on.” But here’s the echo. It happened last night on Fox News. Michael Caputo was on, and he was asked about this effort of Mueller and the special counsel investigation and what it all means, and here is the Limbaugh Echo. 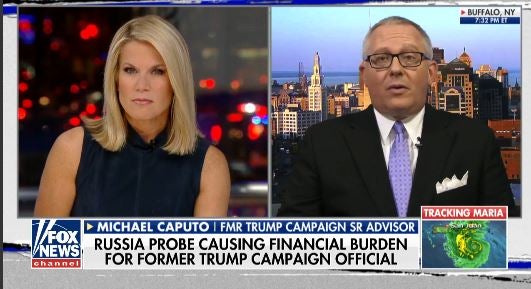 CAPUTO: I’m not quite certain they’re gonna beat President Trump and the people around President Trump, but I believe that that is their purpose. I think the establishment that’s been entrenched in Washington for so very, very long on both sides of the aisle, they can’t have another Donald Trump pop up in 10 years, another billionaire populist who wants to make things right in Washington. So they have to punish Donald Trump, his family, destroy his businesses, his friends, where I guess I fit in and others, and just to make sure that this never happens again.

RUSH: Folks, I cannot tell you how correct that is. That is almost 100 percent of the motivation behind the Mueller investigation, the deep state leaks on supposed collusion between Trump and Russia. All of this is aimed at destroying Donald Trump and everybody with him to send the signal to others who might be thinking of trying it, like Kid Rock.

“Don’t even think about it, because we will destroy you too.” I’ve tried to come up with various analogies to further explain and be persuasive on how this is actually structured and what it is, searching for ways to explain just how elite and distant and removed from the rest of the country the Washington establishment is. It does compromise people of all parties, not just both, but all parties.

It’s made up of people who have certain university pedigrees, they are in certain vocations, and it is a very exclusive, very arrogant organization. It does not have membership. There’s not a manual that contains the names of everybody who’s a member. You know whether you’re a member or not. There’s not a single figurehead leader of the establishment. It’s more a way of life and a way of thinking.

There is no amount of achievement, no amount of success that can get you into it. It totally is dependent on your education, your family. It depends on much with your background, what you’re trained to do, and your way of thinking. And I’m telling you, it’s the most exclusive club in the country. And they have been rocked.

The establishment has been in charge, in control and running things for longer than you would believe. And it gets away with disguising itself by having two political parties that appear to be at war with each other, and they make a pretty good show of it. There are some differences in the parties. I mean, the establishment’s not all friends. They’re not all like-minded.

They’re not all going to backyard barbecues together, but even those who are on the outs politically, say Republicans not part of the mainstream media apparatus, not part of the dominant liberal culture, there nevertheless are members, and they value that, and they treasure it, and they will put their remaining membership, staying a member of the establishment above anything else: winning elections, finding certain kinds of employment.

It really is a close and tight-knit group. It’s relatively small, when you compare it to the entire population of the country, but it is where all of the power and the wealth is actually concentrated. Now, there are a lot of wealthy people not part of it like Trump. But it’s the power center and the power structure of the country. There are people that live in California that are in the Washington establishment. There are people in New York that are part of it. Very few, but they’re there.

And the attitude is they are better than everybody else. They are special simply by virtue of membership in this club. They are special in ways that nobody can replicate. You cannot be the people they are because you don’t come from the people they come from. It’s that exclusive. You can’t grow up having no knowledge of the establishment and end up going to school at Harvard and doing well and automatically end up in the establishment. It’s doable. Of course, it’s been done. But it’s not automatic. And as I say, there’s no initiation ceremony, there’s no clubhouse.

It’s an attitude, it’s an aura, and the attitude is one of total superiority, supremacy, knowledge, power, they’re better and they know it, than everybody else. It doesn’t matter how dumb or stupid they are. These are the people ruining everything, by the way. These are the people that got us into $20 trillion in debt and the people that voted for ’em, in large part. I mean, can’t exempt the dependent class totally from this, but you get my drift.

And Trump will never, ever, no matter what, never, ever will be admitted to this. No matter what he does, no matter what he says, no matter how many friends he makes that are in the establishment, it will never happen. They can’t permit it. If somebody like Trump is permitted in the establishment and is an acknowledged member of it, then there goes the establishment. Everything they have used to keep people out will have blown to smithereens. He can’t become a member of it, and he shouldn’t even try or want to. Because the things he would have to do to convince them he’s worthy would mean betraying everybody that elected him. And he’s not gonna do that.

But Caputo here is more right than he knows. The Mueller investigation, 17 investigators, all Clintonites or Obamaites. They’re looking at Trump business affairs 10 and 15 years ago. And I will guarantee you they’re looking at Trump’s tax returns that hadn’t been made public and that $900 million tax deduction. If they can wipe Trump out with IRS penalties and taxes, they will do it folks. If they can wipe him out. They won’t care. They have no compassion. There’s nothing humanitarian about this group whatsoever. If they could wipe him out, they will, to send the message to everybody: don’t even try it.