A Shout Out for The Limbaugh Letter

RUSH: Here’s Michael in Weston, Florida. Welcome, sir. Great to have you here.

CALLER: Fourth-time caller, post-Irma, LifeLock dittos thanks to you Rush.

RUSH: Thank you, sir. Nice to have you on the program with us. 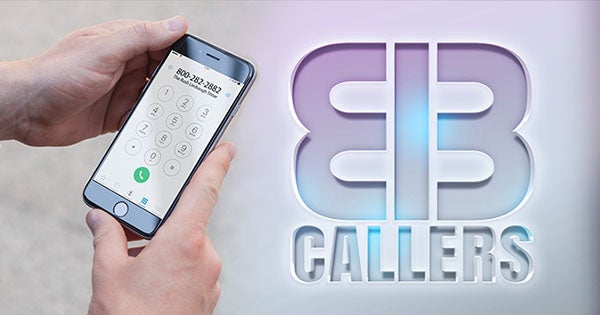 CALLER: Rush, I’ve got three topics in ascending order of importance, if you would like to go over them with me.

CALLER: One’s political. Second one is making the host look good. And the third one is education.

CALLER: On the program a couple weeks ago you started talking about the media’s attack on the Trump voter and maybe trying to cost him voters. But I didn’t vote for Trump in the beginning, or, you know, in the first election, out of principle objections and image objections and things like that. But if I had known how much it was gonna drive the Democrats and the media crazy, I would have voted for him, and I’m gonna vote for him next time.

RUSH: Who did you vote for, not that it matters. I’m just curious.

CALLER: I was a Cruz supporter, and because of, as I said, the issues with Trump, I didn’t vote for any presidential candidate.

RUSH: Right. Okay. But now you would?

CALLER: Now I will.

RUSH: Now you would. Is it just because he irritates the left so much or are there —

CALLER: No, he’s on the right track about a lot of things.

CALLER: His speech yesterday was brilliant.

CALLER: And things like that. He’s on the right track. And I’ve never really objected to that. It was just kind of the way he went about it. I don’t think it’s a constitutional method in all these things. 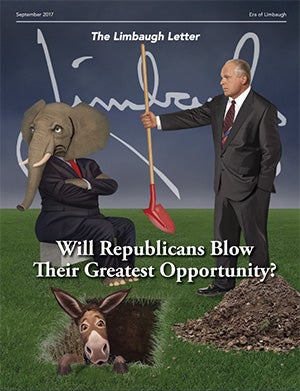 RUSH: Well, thank you, sir. We don’t get a lot of calls about The Limbaugh Letter, but when we do, everybody on that staff just loves it.

CALLER: They deserve some kudos on that. Dinesh D’Souza’s great and his article was great. Your interview with him and the facts. I had just gotten off the phone with my sister about four hours prior discussing single-payer health care and the lib lies that was in that section, I pulled it out and mailed it to her.

CALLER: It was very timely.

RUSH: Thank you, sir. That’s how word spreads. The Limbaugh Letter, people don’t know how difficult that is, because, look, 15 hours a week here on the radio that is then reproduced on the website, and then here’s this 16-page monthly publication that’s now gone digital. What do you do to put things in it that haven’t been said? It’s a monthly challenge and the people that put that together are excellent at it.

RUSH: And they follow my example. That’s why it’s great. But really in all candor, it is 15 hours a week. What is there not said? It turns out a lot, and the newsletter is the repository for it. So I’m really flattered that you mentioned that.

CALLER: Well, whoever did the cover, it was brilliant.

RUSH: Well, now, you said Dinesh. That’s two issues ago. Which cover are you talking about?

CALLER: The cover of the Republican elephant refusing to take the shovel?

RUSH: Oh, yeah. (lauging) You should have seen the original. Brian, hold that back up again. Oh, okay. Yeah, he’s gonna bring it in. (laughing) Yeah, the donkey is buried. Let me hold it up on this side. And Brian, switch on the side camera so people can get a shot of this.

CALLER: I’m just saying that your observation about what the Republicans are doing to themselves is spot on. I didn’t vote for Trump out of principle and I’m sure as heck not gonna vote for a Republican, like McConnell or Ryan, out of principle, either. They better get their act in gear.

RUSH: So, you’re not happy with them.

CALLER: That’s an understatement, and I won’t say more than that.

Anyway, I know you support Hillsdale College, and I do too, and I just had the idea that it might be great — I know you do two marathons already as far as for the leukemia and for the first responders and Marine Corps, but I really don’t think your audience would mind too much if it was going to a worthy cause to have a third radio-thon for education to support institutions like Hillsdale and their Barney charter schools.

CALLER: I think that’s great, and I challenge you that if you put it in place I will match you dollar for dollar all the way up to $500. How about that?

RUSH: (laughs) Okay. We’ll put that in the hopper. You know, about the radio-thon, we have given them a break for a while, and I’ll tell you why. We’re coming up on 30 years, and every year I’ve asked the audience to donate to something. And I got to the point where I said, “I’m uncomfortable continuing to ask.” Those that have contributed and want to continue, they know that leukemia is there, and if they want to continue to give, they can.

But it comes under the umbrella that I just do not ever want to look at this audience as first a bunch of customers or donors or what have you, and I don’t want to set this up to where this audience is judged on how charitable it is, because financial pressures are extensive out there. We’ve gone through a stagnant economy for eight years with Obama, and even before that it wasn’t going great guns.

And I just thought the audience needed a break, even though it’s all voluntary, just needed a break from being asked or cajoled or whatever to donate. I’m not saying that we won’t return to it, but — (interruption) No, no, no, no, it’s not like Jerry Lewis, the muscular dystrophy. That was a whole different thing. He just got tired or they wanted to change directions. This was just an active decision I made with all of you in mind.

After so many years, I thought we had pretty much got what we were gonna get, even though the audience is growing. Maybe I misjudged it, but that was my thinking on it. We can always resume it. (interruption) What do you mean, a lot of pushback? Oh, Snerdley thinks I’m gonna get pushback to reconstitute these things. Well, we’ll see. I’m very tough to reach. So even if there is pushback, I may not even be aware.

RUSH: By the way, since I’m holding here in my formerly nicotine-stained fingers the September issue of The Limbaugh Letter, let me tell you, folks, we’ve got a new premium offer with a subscription to RushLimbaugh.com, our 24/7 website. We got a brand-new tumbler, a brand-new Tervis tumbler, and it’s the greatest tumbler we’ve ever made, and that’s free with a subscription.

So you throw in The Limbaugh Letter and you get the whole boat. Rush 24/7, it’s encyclopedic, folks. It is so underpriced, I can’t believe we’re selling it this cheap and we throw in a newsletter subscription, you’re even better off.