RUSH: I love that the media is going nuts over Trump’s tweet, the retweet of his golf shot hitting Hillary and knocking her face flat at the top of the stairs on an airplane. I love that the media’s just — and the Never Trumpers are having palpitations. If they’re wearing heart rate monitors, they’re off the charts. They just can’t believe it. It’s so unpresidential. It’s so horrible. 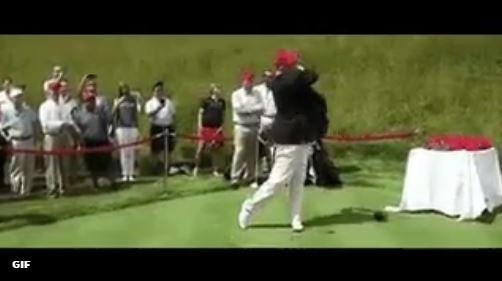 How could anybody, ew, ew, this is so offensive. This is so beneath the office. Yeah, but you know what? (laughing) In many ways it’s real. And Trump knows it’s gonna tick ’em off. And then calling the potbellied dictator in North Korea “Rocket Man”? He called the premier of Japan and said “Rocket Man.” (laughing) “Mr. Limbaugh, would you be laughing if this was something that Bill Clinton or Barack Obama had done?”

I don’t know. I would have to laugh at it. I would have to laugh. I mean, ’cause, first place, Obama doesn’t play golf, so any video of Obama doing a golf swing would be like Obama in the mom jeans throwing out at the first pitch at the Washington Nationals. That itself was a national embarrassment. But if Obama was faking a golf swing and the golf ball happened to knock who, I don’t know, Mitt Romney off the roof of his station wagon while he was putting the dog up there, I might laugh at it. But Obama, he’s not capable of calling Kim Jong-un “Rocket Man.” It’s a stark difference.

RUSH: Yeah, I was gonna ask, but then I figured, I don’t need to ask; I know. I was gonna ask if any of you were upset at the Trump retweet. This was not an original. Somebody tweeted a made-up video, Trump with a golf swing, he’s wearing his white golf slacks and his jacket, and he takes a healthy swing with a driver — it’s on the tee box — and they cut to a golf ball hitting Hillary Clinton smack in the middle of back at the top of the steps getting on the airplane and she flies forward and falls flat on her face, which happened, just like they stumbled and nearly fell forward on her face getting into the van on the 9/11 day where she had to leave the 9/11 ceremonies in Manhattan a little early. She wasn’t feeling well.

And of course Drive-Bys, “That’s just unseemly, it’s unpresidential, it’s juvenile, it’s sophomoric.” So I was gonna ask if any of you Trump voters were embarrassed by it. Trump didn’t create it, but he retweeted it, but he liked it, wanted people to see it. But I know you’re not mad about it. (laughing) I don’t need to ask you. (laughing) I know you’re laughing yourself silly over it like I did. It’s funny! It’s funny, and it works because it’s got an element of truth in it. That’s exactly what happened to her.

You know, have you seen the latest? I saw a picture today, Mrs. Clinton’s at a book signing at Costco. And you know where they’ve got her? They’ve got here near the toilet paper. She’s sitting there, and there are pallets and pallets of toilet paper. I’m not making this up. I wouldn’t make it up. I don’t have to make it up. And there’s just a trickle line of people going through there.

There’s a controversy. Amazon deleted a whole bunch of reviews of her book on the first day. Most of them were negative, but there were some positive. So it’s a big controversy. Amazon says we deleted ’em because there’s no way, there is no way that many people had read her book in toto and able to write a review. We don’t consider those reviews real. A review that gets posted the day the book comes out, we don’t think it’s real. So they smacked it, they got rid of it. I don’t know how many was it, it was maybe 1,500 or 900. I don’t remember the exact number. And then the, quote, unquote, real reviews came in.

But it reminds me, there was a piece in the Wall Street Journal last Thursday, an opinion piece, Kimberley Strassel, who is a brilliant op-ed writer at the Wall Street Journal, and her piece was, “What Really Happened to Hillary.” Because Hillary’s running around, it’s unseemly continuing to make excuses and blame everybody else. And I have to tell you something, folks. Crazy Bernie’s out there doing his own version of this. He’s out there getting mad at Hillary for blaming him, which is what she’s doing, and Crazy Bernie is saying that if he hadn’t been rigged out of the nomination, he would have been elected, which isn’t true.

In the Electoral College, neither one of them would have gotten close, and if the Democrats think that Hillary’s problem was that she didn’t go left enough and that Crazy Bernie would have done better, Strassel’s point, she’d looked at the data, she’s sifted through it, and she’s concluded that either one of them would have lost because if there was this much overwhelming support for Crazy Bernie, where was the evidence of it when he was out campaigning for her?

Why was he unable? Some might say, well, his voters were so upset. Well, that’s a problem too! And I don’t care if his voters are mad at Hillary, mad that he got rigged, if their guy is still out there urging them to do something for the party, to beat Trump, and they don’t do it, then what’s to suggest Crazy Bernie as a presidential candidate is gonna be persuasive.

So the bottom line is, you’ve got Hillary sitting next to pallets of toilet paper at Costco signing her book, which is filled with excuses blaming everybody but herself, from Comey to — the list is — you know the only thing wrong with it? I didn’t make it. I asked myself, am I slipping? I used to be on every Hillary hit list. I mean, I usually was in the top two, top five. I’m not even on this one. But then again, hardly anybody is named. She names groups of people. (interruption) No, don’t start a rumor that I’m gonna buy Rolling Stone. I don’t want to buy Rolling Stone. No, no, no.

Snerdley wants to start a rumor that I’m gonna buy Rolling Stone. That’s up for sale now. You know why? They are dead after running the fake rape story at UVA and getting creamed in court over it, Jann Wenner has said, “I’m outta here.” Maybe he can get Bezos to buy it and make it the weekly magazine of the Washington Post. That’s what they ought to do. Like New York Times has their Sunday magazine, and the Post has one of their own, but get this thing and put it in the rotation. Let Bezos buy it. Use it! You know, have stacks of Rolling Stone next to Hillary book signings instead of toilet paper. It’s one and the same.

The point is, the Democrats, name for me who is the front-runner, who’s on the list of the front-runners for the 2020 Democrat Party? My point made. Joe Biden. Okay. Joe Biden’s, what, 70 some odd? Joe Biden hasn’t won anything on his own on the ballot. Who else? Elizabeth Warren? Sorry. Ain’t happening. That’s imagined excitement as well. Well, the Castro brother. That was a big dream, one of the Castro brothers. That hasn’t worked out for ’em either.

Andrew Cuomo, the brother of Fredo, governor of New York. Yeah, yeah, and Rahm Emanuel. I mean, his name is tossed. But none of them are, “Yeah, man.” The Democrats don’t have anybody that excites ’em. What they have is hatred for Trump. But the picture of Hillary Clinton blaming everybody, including Crazy Bernie, and Crazy Bernie furthering the illusion that he could have won if the nomination hadn’t been rigged against him, it’s just another reason why I get so frustrated over what the Republicans are not doing, and that’s taking advantage of all this.

By the way, Glenn Thrush, New York Times, decided to delete his Twitter account at midnight tonight. Too much of a distraction, he says. Why do you think that is? I’ll tell you why. It’s because Trump is prospering there, and they haven’t been able to destroy him there, so they’re gonna, to hell with it. If Trump’s there, I’m not gonna be. I’ll bet you a bunch of Drive-Bys drop their Twitter accounts. Thrush leading the way.