More Nails in the Coffin of the NFL

RUSH: In the sports Drive-Bys, they won’t let go of this Colin Kaepernick thing. They just won’t let it go. Oh! Speaking which, in fact, let me tell you what’s coming next, based on this story.

Here’s the headline. It’s from the New York Times. “ESPN Football Analyst Walks Away, Disturbed by Brain Trauma on Field.” Ed Cunningham, 48 years old, a former NFL player, resigned as a college football analyst for ESPN and ABC in the prime of his broadcasting career.

“If Ed Cunningham had not already seen enough, he would be back in a broadcast booth on Saturday afternoon, serving as the color analyst for another top college football game televised on ABC or ESPN. It is the work he has done each fall for nearly 20 years.

“But Cunningham, 48, resigned from one of the top jobs in sports broadcasting because of his growing discomfort with the damage being inflicted on the players he was watching each week. The hits kept coming, right in front of him, until Cunningham said he could not, in good conscience, continue his supporting role in football’s multibillion-dollar apparatus. ‘I take full ownership of my alignment with the sport,’ he said. ‘I can just no longer be in that cheerleader’s spot.'”

You think he’s gonna be the only one? The way people become famous today, as they’ve seen it happen on Twitter and on Facebook, is you get part of a movement that the media loves. Well, right now, we live in a time where the media is predisposed to oppose and try to destroy anything that is distinctly American. And in that list of things is the National Football League and football, college, high school, you name it.

It is a uniquely American game. And that’s why they love Kaepernick. Kaepernick came out and protested not just the country, but the NFL. And this is what the media is. The media is supportive of anybody and anything that is anti-America, all while claiming that they’re the best Americans, all the while claiming they love America. “We journalists love America. We are the biggest patriots. We are the ones who want America to be perfected. We’re the ones who want America to reach its glowing ideals!” And that’s simply a crock.

They are part of the Obamaesque group of people that believe this country is flawed and unjust and immoral and deserves to be punished for all of its grievances. And football is on that list because football kills. Football maims. Did I not tell you when this whole thing began with concussions and the social justice warriors getting on this case? I told you. It was years ago, that the days of the National Football League or football as you and I know it are numbered. We just don’t know how many they have left, but it’s over. And this is just the latest example.

So here you have a 48-year-old announcer who is going to be the biggest star he’s ever dreamed of being in his life. Nobody ever heard of this guy, even though he’s a color analyst on ESPN. I mean, there’s so many of them out there now, they’re cookie cutters. They’re a dime a dozen. But this guy, Ed Cunningham, he’s gonna stand out. He can no longer be a party to this, not in his name. No, ma’am. No, sir. Not in his name are young men going to be disfigured and permanently damaged. Not in his name is gonna happen and he’s gonna be celebrated and he’s gonna be a hero and then anybody else who doesn’t follow along, depending on who they are, this is the beginning of the whole process of shaming anybody who earns money connected to football, anybody who acquires fame.

Now, the players will be exempt for a while. But if the players end up protesting the flag or protesting the NFL or protesting America like Kaepernick did, they will be celebrated, and they will be promoted. So keep a sharp eye. You know, when the left gets going on things, there’s never an end. There’s just always the next phase. You think at some point in every leftist movement, “Okay, that’s it, they don’t have anywhere else to go,” but they always have somewhere new to go. I imagine there are those of you out there saying, “Rush, you’re overreacting.” No, I’m not. And he may be the only guy this season, but I guarantee you he’s gonna be so celebrated. 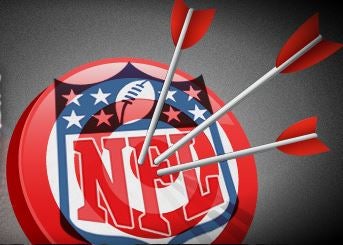 RUSH: Let’s use the Colin Kaepernick example — and I’m going to do this ’cause I’ve also had a couple emails, “You didn’t finish what you were gonna say about Kaepernick.” I thought I had, but let me run through it again. I’ll do this as briefly as I can. The NFL has not hired Colin Kaepernick. Colin Kaepernick walked out on the San Francisco 49ers. He had a contract. He walked out on it. He doesn’t want to play with them anymore. He becomes a free agent. He has no offers. The sports Drive-Bys are outraged.

They think he’s being blackballed because of his politics. He may be — and if he is, the people blackballing him have every right to do so. What do you think the First Amendment’s free speech clause grants you? The right to say what you want politically? You’re right. It does. Now, the First Amendment says that government cannot stop you from saying what you want. It doesn’t say the San Francisco 49ers can’t. If you work someplace, your First Amendment rights do fall under the policies of your owner or of your boss or of your workplace.

This is not a fine point. But larger point is this: The media is trying to portray Kaepernick as a hero for courageously and with great guts criticizing his own country and criticizing the bias and the prejudice and the murderous police. It takes guts and courage. Now, there’s every entitlement to do it. Kaepernick, anybody else has every right to say what they want to say about that. But, two things are incumbent here. No one has the right to be heard — and this I find… When I say this to people who think they understand the First Amendment, that shocks them.

How many people do you think believe that Kaepernick should be applauded for courage and not have to suffer consequences for what he said? How does that work? Everybody… You know, there’s a price. There are consequences. There’s gonna a reaction. Not everybody’s gonna agree with everything that anybody else says. Kaepernick is not a victim. But they’re trying to portray him as a victim. “He went out and he said courageous things; he had the courage to criticize his own country,” and for that he should be made a hero? That’s not how it works.

Nobody gets to… You don’t get to go out and say provocative things and then be immune from criticism or consequences. Everybody is. And so that factors into what you’re gonna do. If you’re gonna go out and you’re gonna say things that are gonna make it harder for the people who might hire you to do business, it makes perfect sense they wouldn’t hire you. Now you add to that that these people may believe you’re not any good anymore. But if Kaepernick isn’t being hired because of what he said, that’s perfectly normal.

Now, some of the responses, some of the circumstances are not fair, admittedly. But in a free and open society with the First Amendment guaranteeing political speech, there are consequences, and there are ramifications. The point is, the First Amendment does not grant anybody immunity from the consequences of what they say or from the reactions from people to what they say — and Kaepernick is being held up as somebody who should be immune. “He should not be held accountable for what he said because we happen to agree with what he said,” the media says. That’s not how it works.

If you’re a football coach and you believe your team needs discipline and focus if they’re to have a chance, the last thing you want is a circus, for whatever reason. Talk to Tim Tebow! Tim

is the exact opposite of Kaepernick. He loves America, is a born-again proselytizing Christian. Why do you think he’s not in the league? A lot of people think, “Because there’s anti-Christian bias, Mr. Limbaugh!” There may be, but there are also people that don’t want to deal with the circus — and, if they don’t, that’s a consequence. You know, it may seem unfair, because you make value judgments on what someone says.

Like you may value what Tebow is and what he says, and you might not think so much of Kaepernick and what he says or does. But in both instances, there are consequences for behavior and for reactions. You know, if you want to be on radio or TV? That’s what Kaepernick ought to do. I think what he ought to do, Kaepernick ought to get a show on YouTube and go to town. He can say anything he wants; Google would celebrate it. (Google owns YouTube.) But Jim Brown said it. Jim Brown said (summarized), “Make up your mind what you want to do: You want to play football or you want to be an activist?”