My New Theory on Trump and Sessions

Here’s Brenda in Casterly Rock, Westeros. Great to have you on the program. Hello.

RUSH: Great to have you with us!

CALLER: Hey, I called because I wanted to discuss what I thought Donald Trump was doing with Jeff Sessions. I thought it was like a tactical kind of move where a boss comes in and says basically, you know, if you can’t handle it I’ll get somebody else to handle it. And he just kept saying it pretty much over and over, you know, everybody’s saying that he was berating him. I didn’t see it that way. I saw it as a boss saying, “Hey, if you’re not gonna take care of this job and figure out where the leaks are coming from and investigate it, then I’ll find somebody else who will.” And that’s basically why I called in.

RUSH: Did you vote for Trump?

RUSH: So in this spat, you side with Trump. You’re not siding with —

CALLER: No. He’s the boss. To me he just seems like the boss —

RUSH: This is where the media does not get it, ’cause the media is dying, they’re striving to make people like you, Brenda, abandon Trump.

RUSH: I know. Well, let me run another theory by you about what’s happening.

RUSH: Did you hear the various theories that I espoused yesterday?

CALLER: Which ones? I was on the phone for a long time with you yesterday.

RUSH: There’s no wrong answer. I mean, I realize you can’t listen to all three hours every day. You should, but I realize you can’t. But one theory was that if you look at the way Sessions was first treated when he was nominated, they — 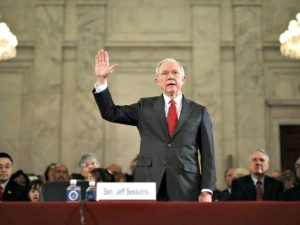 RUSH: — called him racist, he’s a reprobate, middle name Beauregard, they hated him. But now, now that Trump has turned on him, guess what the media and the Democrats are doing? They’re singing the guy’s praises. He’s all filled with integrity and honor —

CALLER: They love him.

RUSH: — one of the greatest guys. And now Trump comes long and starts dissing Sessions. And what if Sessions now, which he did yesterday, announces a brand-new leak investigation right in the middle of the media telling everybody how much integrity he has. So the theory was that it was a giant political strategy to end all of this castigation of Sessions as a prelude to having him proclaimed filled with honor and integrity as he opens the leak investigation. I’ve got a new theory, though. Hang on.

RUSH: Okay. Here’s another Trump-Sessions theory. Listen carefully. I don’t want to have to repeat this. It’s out there. Trump and Sessions and everybody in the administration from the get-go wanted to bring down Hillary Clinton. They want to do that investigation. They wanted to do all of these investigations into Hillary and her emails and the Russian connection to the Democrats. Trump and his administration are fed up with the way this whole thing was handled during the campaign, during the transition. But they can’t dare — they cannot dare — ever express this desire. They have to keep this one close to the vest. 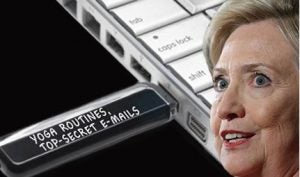 The public flaying of Jeff Sessions is strategic, designed to hide from the media and the Democrats what’s really going on. Meaning: Trump berating Sessions every day and everybody noticing and everybody saying, “Well, just fire him,” or taking up arms for Sessions, defending Sessions. The image is clear that Sessions isn’t doing anything Trump wants. When in fact, behind the scenes, everybody’s on board to finally taking it to the Democrats and doing an investigation, but they know they can’t do that if everybody’s aware they’re doing it.

So this treatment of Sessions is designed to make it look like he’s an incompetent idiot who is actually in opposition to Trump when the truth is they’ve all collectively decided this months ago. I heard this theory espoused last night. I know what you’re saying, “Rush, aren’t you worried? Aren’t you worried that by publicizing this you’re blowing it?” Nah. I mean, even if it is happening, the media’s not gonna believe it, ’cause they haven’t heard a leak about it, and if nobody’s leaking about it, it’s not happening. What do you think of that theory? (interruption)

RUSH: Here’s Pat. Pat’s in Richmond, Virginia. Great to have you on the program. Hi.

CALLER: Hey, Rush. Mega iPhone dittos. How are you, sir?

CALLER: My point’s very quick. I believe that the president has been counseled by his legal and his political team from an optic and legal perspective not to have any kind of back door conversations with the attorney general regarding any of the pre-campaign stuff like Russia or the Clintons or whomever. And as a result, what he’s doing, is he’s using the media to communicate to the attorney general exactly what it is he wants to see done.

And he’s doing it in such a way that he knows that they’ll air it by insulting him and saying he’s disappointed and creating a controversy so he can cloak his real reason of doing it within the media so that when all this hits the fan later, if Sessions does any or all of what he wants him to do, then the media can’t say he met with him behind closed doors or did anything clandestinely.

RUSH: No, that’s true, can’t do that, but if your theory is right and Sessions follows through on all this stuff, they can say, “Well, it’s obvious that Trump intimidated and scared the heck out of Sessions. Sessions totally caved to what Trump wanted him to do.”

CALLER: Well, sir, I don’t disagree that that’s what they’ll spin it as but, you know, if there’s sort of a wink and a nod between the two, they already both know that and they don’t care.

RUSH: So you think it’s strategic. You don’t think Sessions is in trouble. You think this is a technique to communicate and the end result is what happens, to hell with what the media says about it. Here’s what we need to get done, this is how we’re gonna get it done, it’s how I let him know I want to get it done, bammo.

CALLER: Yes, sir. I don’t think that Sessions thinks he’s in trouble because he knows getting any appointment through takes a thousand years with these Democrats. They put up every little block they can and, you know, recess appointments work well for a little bit, but they’re just sort of a holdover. So you never know — you know, in my view, I think he knows he’s safe. I think Trump, the president knows he needs the conservative team to back him up, and, you know, along with everything else, the conservatives of the country.

And so based on all those things, I think it’s just a way that they’ve devised amongst themselves to communicate. Now, they probably haven’t talked directly about it, my guess is the staff may have, and at the end of the day it makes perfect sense because he’s out there publicly doing it. The media is taking the bait like a big tuna with a piece of herring, and he’s playing them beautifully like he has every day.

RUSH: Well, one of these things is gonna be true. One of these theories to explain all this has had to have truth in it and at some point it will become clear. It’s great you got in with yours.