Republicans Are Squandering a Chance They Never Thought They’d See

RUSH: We’re living at a time in our lives, you and me — politically, we’re living in circumstances — I don’t think very many of us ever thought we would have.

Do you realize that aside from the embeds and the career people that have been appointed to the various levels of bureaucracy by previous presidents going all the way back to Jimmy Carter…? Aside from that, the Republican Party, on paper, runs Washington, D.C. The Democrat Party, on paper, has not had this low a power profile since the 1920s. I’m referring to elected positions held. Now, don’t forget the caveat: I know there’s all kinds of Obama holdovers and Clinton holdovers at the Pentagon, the DOJ, and I know that matters. I know that counts.

But they still do not have the power that the Republicans have, and it is one of the most perplexing and frustrating and angering things, a circumstance… I don’t know how many of you ever really thought the Republicans would win the White House, control the Senate and the House at the same time, with such majorities. Two seats in the Senate. But even Trump’s electoral victory. Yet, despite that, what outward evidence of it do we see? I would submit that most of you think that the media and therefore the Democrats still run Washington.

Even though the media hasn’t been elected to anything. The media does not hold elective power. The Republicans do. It is one of the most exasperating things. Six months into a Republican administration, after how many years of promises to, say, repeal Obamacare, and we’re not an inch closer to it in reality than we were before last year’s election? It’s not gonna get any better than this. The only way it could get better is if this Republican majority were populated by more conservatives and different ideological types.

But that’s not gonna happen in our lifetimes, it doesn’t look like. This is it! It doesn’t… It’s not gonna get any better than this, and I cannot believe that this opportunity is not seen by these very Republicans we’re talking about in Washington — in the House, in the Senate, throughout the administration. (interruption) No, no. My head’s not in the sand; I understand they all hate Trump, or enough of them do. I understand all that. Actually, folks, it’s one of my points here. It’s an opportunity being squandered, and I know it has you frustrated.

I know the old saw: They didn’t think they were gonna win, therefore they weren’t prepared. So what? They did win. It ought to be euphoric. It ought to be exciting. Apparently, it isn’t. Apparently, it’s frustrating and challenging and all kinds of things you would never associate with victory. Victory shouldn’t be a problem. Victory shouldn’t be a negative. We’re in a huge battle in this country, and it isn’t populists and nationalists versus conservatives or conservatives versus moderates or moderates versus progressives.

We can come up with all the guesses (and we would be right eight out of 10 times) why they’re not investigating Hillary, why they are not investigating the Democrats’ connection with the Russians. By the way, there’s new news out today that the FBI did get hold of some computer equipment from Debbie “Blabbermouth” Schultz’s IT guy that they would not turn over to the FBI. There’s a potential gold mine there to be investigated of Hillary and the Democrats and the Democrat National Committee, and there just doesn’t seem (that we know of, anyway) to be any energy to uncover it.

All of the energy seems to be focused on getting Trump and getting rid of Trump — which I, of course, am not denying that they want to do that. We’ve chronicled it here. But an opportunity is being squandered the likes of which (chuckles) we never thought we were gonna get. We hoped for it, and it probably is not something we could reasonably expect happen again. If it does, it’s only because the Democrats are so hapless.

Even in the midst of all of this, the Democrats still cannot come up with an issue-oriented agenda to appeal to voters. All they’ve got is their phrase, “Well, we’re not those guys,” or “Trump sucks,” or whatever it is they’re running around saying. They don’t have… They can’t come up with one thing to give people a reason to vote for them. That’s how decrepit their agenda actually is. It just adds to the frustration that the opportunity we all see in front of us being squandered presents. 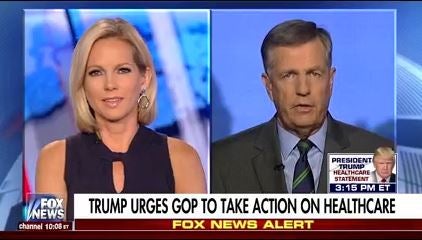 HUME: If that happens, it will be one of the most colossal failures we’ve seen by any political party in power in a very long time indeed. It will be the first entitlement reform of any size in a long time. It is something the Republicans have long committed themselves to doing and which, for the ultimate financial and fiscal health of the country, clearly needs to be done. If Republicans can’t even do this, it will signify, I think, Shannon, that entitlement reform — which is something, you know, nearly everybody agrees needs to be done — can never happen. Because if the Republicans can’t do it when they control the White House and both houses if Congress, you gotta ask the question: When can it ever happen?

xRUSH: You know, that’s an interesting point, kind of along the lines up of the point that I’ve been making: We’re never gonna have this opportunity again. Well, in some of our lifetimes we’re not gonna have in opportunity. Let’s face it, folks: Psychologically, attitudinally, a lot of Republicans in Washington never dreamed of this going to happen. They thought Trump was toast. They all did. Everybody in that town. Now, there’s some exceptions, of course, but I’m talking about dyed-in-the-wool insiders in Washington.

Every one of them thought Hillary Clinton was gonna win. It was only a question of how big was her landslide going to be. We’ve had Republicans admit that they weren’t prepared to win, they weren’t, therefore, planning on actually governing. They were planning on resisting. Which they didn’t think they were gonna have much success at resisting ’cause they didn’t think that they were gonna have much power. I know for a fact that a number of them thought that the first female president was gonna be just as impossible to deal with as the first African-American, meaning:

“You can’t criticize her, ’cause if you criticize her, the press will call you a misogynist or a sexist or a pig.” So they were prepared to basically get walked over again like they have been the last eight years under Obama. And then, all of a sudden, the unexpected happens and nobody’s prepared for it. And because nobody was prepared for it, there was nobody that actually… If you don’t think it’s possible, really don’t think it’s possible, then how do you attitudinally/psychologically prepare yourself for the thing that you don’t think is possible? You don’t.

So Trump wins, and it’s an absolute shock, and then the added bonus — or detriment depending how you look at it — is a lot of Republicans won because of Trump. It wasn’t just that Trump secured victory for himself. He’s right! He did pull many of them across the finish line. He is the reason the Republicans have a majority in the Senate. He is the reason the Republican majority in the House expanded. You couple that with two things: They never expected it to happen, and some of them wish it hadn’t happened. So here’s Brit Hume saying if Republicans can’t get rid of entitlements…

Who will? And this is his point. But I think you can’t take Trump out of this equation. I don’t think it’s right to say, “If the Republicans can’t do it when they control the White House…” It’s if the Republicans won’t do it. That, to me, is a far more accurate description of what’s going on: If they won’t do it. And I’m telling you, much… I know it’s redundant and repetitive, but some of this is due to the fact that there are people in that town (both parties) that just do not want Trump to succeed because that could be the worst thing for them that could happen.