RUSH: You want to hear something funny? You know, Jared Kushner was showing up on Capitol Hill today. He was testifying, but not under oath. So I don’t even know if he was testifying. He was just up there answering questions. Jared Kushner has published, released (What is it?) an 11-page document detailing everything they supposedly want to know here. The big takeaway from it was that in this meeting that was arranged between that goofy-looking PR guy from London — Lodestone? Whatever his name is.

It didn’t take Kushner five minutes to figure out it was a waste of time and wanted out of there. He sent an email or a text to an associate saying, “Hey, give me a call or send me an email. I gotta get out of this meeting. It’s a total waste of time.” He’s totally prepared to tell them whatever they want to know because nothing he knows to tell them. The media has been waiting, as you can imagine, with great anticipation for Kushner’s arrival up on Capitol Hill. Their tongues have been on the sidewalk waiting with bated breath. The anticipation!

I want you to listen how his arrival was treated at CNN. This is John Berman and Poppy Harlow, TV husband and wife. They’re not really married, but that’s what you call male-female anchors. They call each other my TV husband or TV wife. I happen to know this because I know people that do that, and that’s how they joke with each other. Except in the case of Joe and Mika, it’s actually gonna be true someday, if it isn’t already. But they’re an outlier case in many ways.

Anyway, Berman and Poppy Harlow are breathless here in their play-by-play of Jared Kushner walking through a door upon his arrival. Here’s how it sounded. 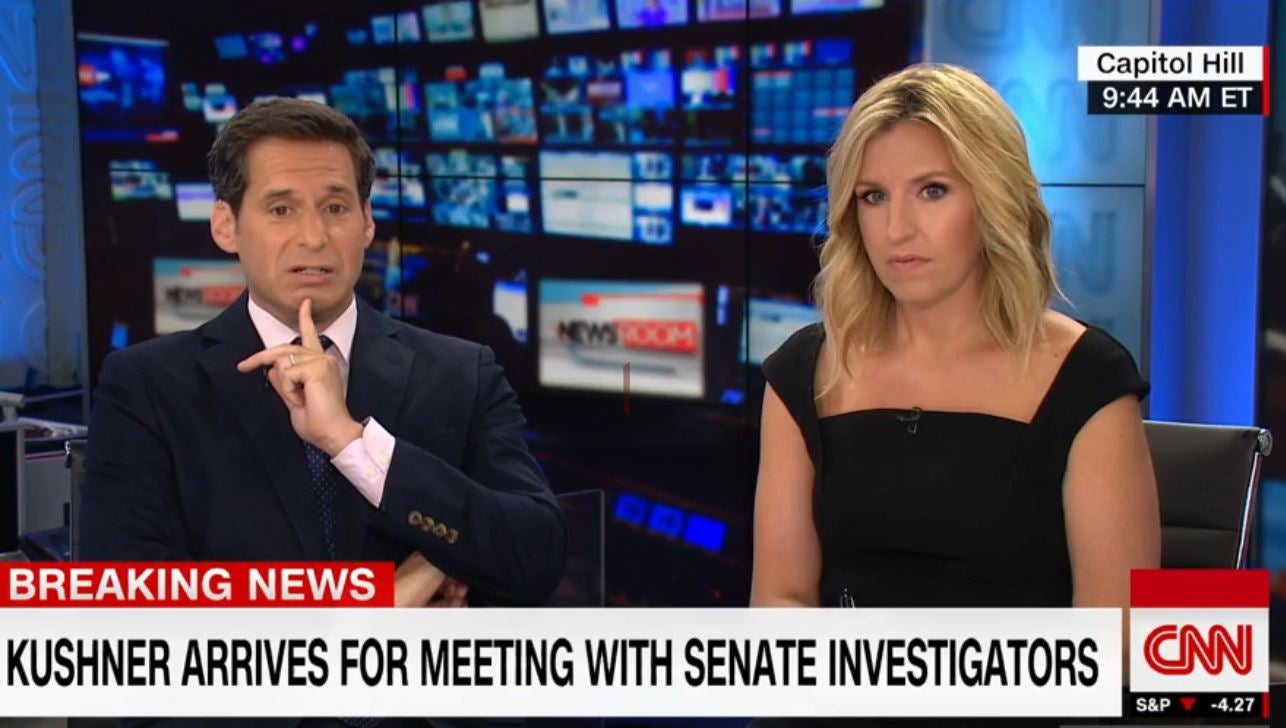 BERMAN: Hang on one second, guys! I think… Let’s go back to Capitol Hill right now. This I believe is Jared Kushner, senior adviser to the president arriving, let’s listen.

BERMAN: All right, Jared Kushner, senior adviser to the president — son-in-law — as loquacious as ever upon his arrival.

HARLOW: That is a true fact: As loquacious as ever —

HARLOW: — because he doesn’t usually say very much.

RUSH: He doesn’t say anything to you people! But they covered Jared Kushner arriving and walking through a door.

Were you able to hear the questions that were asked there with the…? (interruption) I wasn’t. It’s a good thing I have transcripts. One of the questions was, “Was it appropriate for you to meet with Russian officials, Mr. Kushner? Mr. Kushner, was it appropriate for you to…?” Of course he ignores them and walks on in. But, you know, they’re just waiting every day, folks.

They have a body camera on everybody, because they get up every day thinking that day is gonna be the day that some bombshell is discovered, that they’re gonna be able to get rid of Trump by sundown that day, and this is what is motivating them. It is what is inspiring them, the belief that something — after over a year that there is something out there that is waiting to be discovered that’s gonna result in Trump being gone.