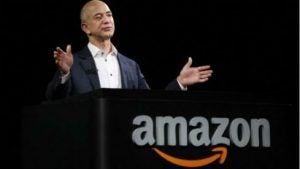 Wait a second, now. That just barely scratches the surface. Did you know that the CIA just paid Amazon $600 million to set up a server farm for the CIA’s data? Amazon has a business that many of you may not know about, and there’s nothing untoward about it. Basically they run a cloud data operation that is the largest in the world that any company can rent space on. Amazon cloud services. And you would be stunned at the number of people that use it.

It has nothing to do with their retail operation other than housing some of the aspects of it. But it’s a separate entity. And there’s nothing nefarious about it, don’t misunderstand. Just that it’s a part of the Amazon operation people are not aware of, and they will become now, because the CIA has just paid Amazon $600 million to set up essentially the cloud service operation for all CIA data.

And when you start putting together all of the interactions between Jeff Bezos, who is Amazon and the Washington Post, and the seemingly out of nowhere worldwide national support for gay marriage and LGBQ, you find Amazon at the bottom, middle, and center of it, in any number of ways.