My Golf Weekend Focus Group: Nobody Blames Trump, Everybody’s Angry at the Republicans

RUSH: So I was away for the weekend. I went up to play in my annual member-guest golf tournament up in Fairfield, Southport, Bridgeport, Connecticut, Country Club of Fairfield was the venue. And if it weren’t for the three teams ahead of us, we would have won our flight. You know, these are always fascinating events for me, because people who play in member-guest tournaments, people who are members of country clubs are largely family and business type people. And it’s fascinating to talk to them and find out what’s on their mind.

And I have to tell you, I mean, this happens all the time, folks. People come and ask me what I think of X, usually a political issue of the day. And I always listen, I always try to pay attention to the first two, three things people ask me about. And it was universal. Everybody who sought to discuss things like this with me. Some people just want to talk about golf and the tournament and all that, but those who wanted to talk about events were just totally invested in what’s going to happen to Obamacare.

They are fit to be tied. They’re frustrated. They were livid. They are under the impression that nothing is going to happen because they think — and, look, I’m talking about maybe 15 people here, so it would be dangerous to extrapolate that. But it was common that they don’t think Trump is the problem. Not one of them thinks Trump is the problem. I didn’t have anybody — and these are achieved businesspeople, some of them still actively working, most of them are, some of them with their sons, otherwise with associates or just friends.

And I didn’t hear a single criticism of Trump from anybody. I heard people laughing about Trump. One of the things people loved what Trump said to the prime minister of France or the president of France about his wife. And they routinely said that their wives were livid with what Trump said but that they thought it was funny as could be. Do you know what I’m talking about, Mr. Snerdley? Well, I know exactly — this is where I know Trump, and, of course, I’m from Trump’s generation, so I know how guys like Trump think.

Now, in Trump’s world, a 39-year-old guy married to a 64-year-old woman is odd. Now, you can say whatever you want about it, but it’s unusual. It’s not something that you see every day, and particularly among world leaders. A 39-year-old young man married to a 64-year-old woman. But to each his own. Well, in Trump’s world, he feels sorry for the guy. And so he thought it necessary to compliment her to try to make the guy feel better.

So he says, “She’s in great shape,” because in Trump’s world you assume that everybody knows she’s 64, you’re 39, that’s weird. But, okay, we’re not gonna judge that. In fact, I’m gonna try to make you feel better. She looks in great shape. He was trying to compliment. But, in this day and age, women are — I’ll give you my own example.

We went to the traditional Friday afternoon event. It rained all day Friday. We got nine holes in in the rain. And you know what, it was 63 degrees. That’s 30 degrees below normal for this time of year, at this tournament. Routinely we can expect a day or two in the weekend to get close to a hundred degrees. It’s 63. And, like an idiot, I didn’t even consult the weather forecast before I left so I had no cold weather or rain gear, so I had to slapstick put it together.

And we got nine holes in. We had three holes in and quit and thought we were through for the day and the weather forecast said, hey, a couple hours in the afternoon, a window where it’s not gonna rain. So we went back over there and got six or seven more in. It was freezing! And it was freezing at night. The hosts usually have to have their air-conditioning at high speed for me in the bedroom. It was just odd. All I could think of was Algore, is he in town, is Algore nearby making a speech. Because any time he goes anywhere to talk about global warming, a blizzard usually happens.

So, anyway, after the qualifying round on Friday we go up to the club and there is this cocktail party and heavy hors d’oeuvres at various food stations. And you see everybody that you secretly hope to cream but you’re telling each other, “Hope you really play well.” I didn’t. And I tell people, when you break up you’re gathering on the first tee or teeing off, everybody says, “Good luck, play well.” I don’t. I say, “Bad luck and I hope you screw up.” Well, because it’s the truth.

But, anyway, there are about 10 of us at a table on Friday night, and the women all there have known me for years. They adore me. But not anymore. Because my host said, “Why don’t you tell –” talking about Trump and his comment about the 64-year-old wife of the 39-year-old French premier or prime minister, president — what is it, president of France? Is that what he is? So my host said, “Why don’t you tell ’em your theory –” How it started, one of the women asked me how Punkin was, and Punkin is my late cat. I said, “Aw, Punkin died.” 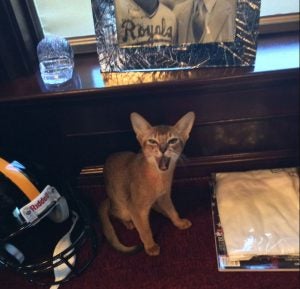 “Yeah, I went out, I couldn’t help it, I got a new one, exact same. I got a ruddy Abyssinian.”

And my host said, “Why don’t you tell ’em your theory about cats and women.” (laughing) Well, these two women at the table no longer adore me. I gave ’em my theory. They tried to smile but you could tell that it kind of grated on them. And it was just humor. But you know what? Mock chauvinism, pretend chauvinism, there’s no tolerance for it anymore. I mean, even among mature generations. And it’s a sad thing because that’s a long line of comedy and laughter that is no longer accepted.

And I could see there was a tinge of, what would it be, there was a chill each time I came into contact with these two women for the rest of the weekend. They were nice, but you could see they were a little — (interruption) Oh, you want me to repeat it now? No way. No way. I’m telling you, it’s a different world. It’s harmless. It’s totally harmless. It’s nothing but stereotypical humor. There used to be comic strips with humor like this in the newspapers when I was growing up and nobody was worried about getting offended.

You know, there are two types of people on the left, and many of them are both: either offended or they’re victims. That’s their mind-set and they’re waiting to be one or the other. So, anyway, the interest in Obamacare and getting rid of it and then tax cuts, it was incredible, because this is what I would hope would have been on the minds of people, but, interestingly, they didn’t blame Trump. Nobody was blaming Trump. There was various degrees of disappointment and anger registered about the Republicans and the question, “Why can’t they do anything? Seven years they promised –” you’ve heard the drill, and these people all had it down pat. And they wanted to know what I thought.

And I said, “Look. Isn’t it obvious they don’t want to do anything? Isn’t it obvious they don’t really want to repeal Obamacare? Isn’t that obvious?” How hard would it really be if it’s this bad? If Obamacare is imploding, as a lot of people say that it is, and if it is falling apart (and it is; it’s by design), and if the implosion by design is going to lead to single payer, what could be worse from our standpoint? Nothing could be worse! But you cannot detect a desire to do it. And now we’ve got the situation with Senator McCain’s health, which means a delay in the vote.

We don’t know how long that’s gonna be. The CBO score is not going to be forthcoming today, I think, when it was supposed to be. But it’s obvious they don’t want to do anything about it. They’re gonna have to be cajoled and pushed. You know, this was interesting too. I have evolved a theorem over the past year or so that — and I’ve shared it with you. None of this is new to you. That legislation’s not even written by members of Congress, when you get down to it. That legislation — and maybe even the word-for-word, but certainly the broad-brush ideas contained in legislation come from donors, come from the money people and the people they hire who are the lobbyists. 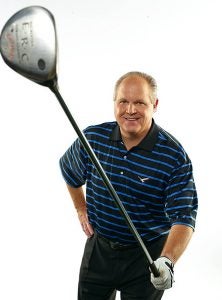 And that’s where all this stuff gets done. And the Chamber of Commerce on the Republican side is one of the largest factors in whether or not there will be legislative reform or changes. Well, the current construction of the Obama repeal and replace contains yet another bailout for the insurance companies. And I had one guy say, “Why do they need to be bailed out at all? Obamacare itself was a bailout for insurance companies with the mandate.” And, I have to say, I was impressed. I have to say, I was impressed with the knowledge and understanding of this particular person.

I said, “You’re exactly right. I mean, mandating that everybody buy health insurance? You can’t have a better regulation if you’re an industry than the government requiring — with the force of law — that every American buy it. How can you lose? And yet they still found a way. And the bailout in this case becomes necessary because the first mandate didn’t work out. People can’t buy what they can’t afford. You could pass every law in the book mandating people buy this or buy that. But, if they can’t afford it, they’re not gonna buy it. And if they can’t get subsidies…

Once you start talking subsidies, then whatever you’re talking about is not real anyway. If the government needs to subsidize it… Like, look at Australia and Tesla. You realize when no subsidies are offered for Tesla cars in Australia they haven’t sold a single one? Not a single one! Which reminds me of Algore, who is on the verge of releasing a book timed to the release of his sequel to An Inconvenient “Lie,” which is coming up. Some of the stuff that he’s been saying… He’s back now talking about seeing fish swim in the streets in Miami.

Anyway, it was fun. It was a great weekend, and I really had a great time talking with some of these people. Some of the groups didn’t say much. Some of them take it so seriously. It’s the Masters. They don’t even smile at you because of the competition involved. But two of the three days I hit the ball well. I didn’t putt particularly well, but I hit the ball well enough that I enjoyed it and had a great time.