Algore’s Back — And More Insane Than Ever

RUSH: Algore is back. He’s got a sequel to his first book and movie, An Inconvenient “Lie.” And now this is an inconvenient sequel or whatever it is. And folks, it’s insane. Now, I fear I’m beginning to overuse the word. I don’t know what else to use. It’s just chock-full of literal lies. But I don’t know how else to characterize it.

This is not somebody writing who’s wrong about things and making mistakes who happens to be honestly intended. This is just straight, straight deception. He said, “We’ve never had a president who’s deliberately made decisions to tear down America’s standing in the world.” Really? He’s talking about Trump here, and this is after Trump pulled out of the Paris accord.

They think this country is ill-conceived, illegitimately founded, and fraudulent. They think it was set up by rich white Christians to benefit rich white Christians, and that’s it. We’re a superpower because we have purloined and stolen resources from all over the world. We have trod on the downtrodden and the sick and the homeless and the thirsty. We have victimized people all over the world. We have attempted to impose our values, which are illegitimate.

I mean, Obama single-handedly, purposefully tore down our standing in the world. Remember his apology tours? We had a president, a historic presidency deliberately made decisions to tear down America’s standing in the world, and what would you call the Iranian nuclear deal? How about Obama, “Well, nobody told us we couldn’t do nukes.” The concept the United States as the good guys, not to Obama. The concept the United States is a legitimate superpower a beacon for hope, liberty and freedom, not in Obama’s mind. We’re oppressors.

The United States is oppressors. These clowns, these professors warning against promoting the work of straight white men, same mind-set. America was too John Wayne, was too masculine, it got whatever it wanted, it took whatever it saw. And Obama’s way of doing business was rejected by voters. “Make America Great Again” was eagerly accepted by millions of Americans, and it’s not about pleasing elitists and collectivists. It’s about leading. It’s not about fitting in. It’s about improving America’s standard in the world and therefore the world itself.

So let’s go to the audio sound bites. Algore this morning on the Today show. Willie Geist said, “Okay. You got your inconvenient sequel, Truth to Power, coming up on August 4th. He says been 10 years, Algore.” By the way, every prediction Gore made has proven wrong. He should be shamed off the public stage, every prediction. Manhattan was to be underwater by now, folks. Go back and look. Go back and read An Inconvenient Truth or whatever it was. Manhattan was supposed to be underwater by now. So Geist says, “What’s changed with the environment and the perception of climate change in the last 10 years?”

GORE: The climate related extreme weather events have become more destructive and a lot more common. Here in the U.S. we’ve had 11 once-in-a-thousand-year downpours just in the last seven years. Mother Nature is pretty persuasive. I went to Miami on a sunny day, no rain, and I saw fish from the ocean swimming in the streets in Miami Beach just because it was a high tide.

RUSH: Not true. But first and foremost, downpours, now downpours are being measured? We’ve had 11 once-in-a-thousand-year downpours? Those are rainstorms. When did we start counting those? But this fish in the streets in Miami is bogus just like it is in Hawaii. It’s not unusual. It has happened for a long time under certain specific conditions at certain times of the year. There’s nothing unusual about it. This is what I mean, that this is purposefully done deception.

Believe me, if the sea level had risen to the point fish are swimming in the streets in Miami, they would be underwater and we would have heard about it by now. This is nuts. So Geist says, “Okay, well, look. Your critics say we’re 10, 11 years after that, the environment’s not lost, it’s getting warmer, and everything’s okay. So what’s with that?”

GORE: Regrettably, some damage has been done. Major sections of Antarctica have now passed a point beyond which some huge additional sea level rise is inevitable.

GORE: And we’re now seeing these incredible downpours. This city was inundated during super storm Sandy as the movie a decade ago predicted, and it happened years beforehand.

RUSH: Are you kidding? Now Sandy…? Hurricanes equal downpours? We’re having fewer of them! If that’s what a downpour is, we’re having fewer major hurricanes. We’re going decades without any. Years. And he’s saying he predicted Hurricane Sandy? Downpours? On CBS Sunday Morning yesterday, he doubled on his predictions despite… Let me give you some of the predictions he made ten years ago. Manhattan was gonna be underwater because of Greenland ice melt. Mount Kilimanjaro was gonna be snow free. 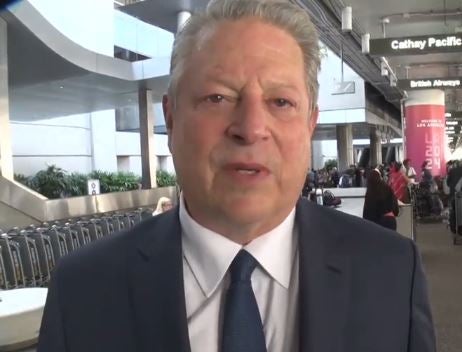 What the Paris accords were for was to “show a sense of purpose. So he said on CBS Sunday, “If we don’t act now, our children will inherit a world of stronger storms, worsening floods, deeper droughts, mega fires, tropical diseases spreading throughout vulnerable populations in all parts of the earth, melting ice caps flooding coastal cities, unsurvivable heat extremes, and hundreds of millions of climate refugees.” Let me ask you about this. I want you to seriously stop and think of this. “Stronger storms.”

How can we stop them now? How can we stop a stronger storm? If we see a strong storm coming — if we’re in Kansas and we see it heading over the mountains, if we’re wherever — how can we stop it now? And they want us to believe that altering carbon emissions is gonna do this? Furthermore, “deeper droughts.” How do we stop them now? We don’t. And how do we cause a drought? We don’t. How do we cause a storm? If we can stop a storm, we can cause one, right? If there is a drought that we’ve caused, we can end the drought by what? Making it rain!

Why can’t we make it rain wherever we want to, then? “Mega fires”? Well, mega fires happen every year and have happened every year, and they’re part of nature. But it’s all just… “Tropical diseases spreading through vulnerable populations, melting ice caps…” There aren’t any melting ice caps. I mean, there might be some, but it’s freezing elsewhere. We’re still in balance. Coastal cities are not being flooded. Nothing’s underwater. “Unsurvivable heat extremes.”

Folks, do you know a dirty little secret? More people die from cold than heat? More people freeze to death every year in the world than die from heat. So global warming would actually be good, if there were any of it. (interruption) Oh, you didn’t know that? You can do things about the heat. There is air-conditioning. But even if you don’t have it, there are things that you can do. But there’s nothing you can do about the cold. There’s not a thing you can do to warm up if you don’t have some means of doing so. Many people — I mean, many, many more people — die from cold than from heat around the world every year. Nobody talks about it.

RUSH: You know how they’re pitching this whole climate change thing is everybody’s a victim. This is how they’re doing it. Make everybody victims of something, and your turn them into complete subservient dolts. They’re victims of things that they can’t control but they can help you control it. If they give you in government all the power, you can help them; you can stop these horrible things. So he’s equating…

What Gore’s doing is equating global warming with victimhood, and that’s the magic to it. That’s what the left has done. That’s their coalition. The Democrat Party-media coalition is a collection of victims, minority and victims. And every sales pitch victimizes whoever is going to be hurt by whatever. And naturally, Republicans want people to get sick and they want them to have dirty water and dirty air and all this ’cause they’re victims.