CALLER: Hi there, Mr. Limbaugh. It’s an honor to talk to you.

CALLER: I just want to talk to you about any firsthand experience with a liberal teacher I had.

RUSH: Ohhhh, yeah! This is… We had this guy yesterday. You let us call you back today. I’m glad. I thank you for that.

CALLER: Yeah, I appreciate that you called me back.

RUSH: Well, we always do what we say we’re gonna do here. You were on hold, and I thought I was gonna get to you before the program ended, and then time vanished. So Snerdley asked you for your number, you graciously gave it to him, and here you are. He’s from yesterday, folks. He’s 15 years old, and he wanted to talk about his English teacher during his last term and how she pushed liberal agenda. What was it like?

CALLER: It was very hard being conservative in her class. She somehow got the school to subscribe to TIME magazine and The Atlantic magazine, which are extremely left-leaning magazines, as you know.

RUSH: She put them around the classroom, and it was, you know, of course, these covers are just absolutely ridiculous, and everyone’s seeing them and agreeing with them, and it’s very tough to be a conservative now in the school system we have.

RUSH: It’s been that way for a long, long time. What was this class?

CALLER: This is actually English class.

RUSH: This is English, and you got TIME magazine covers all over the place.

CALLER: Yeah, and often we’d have to read liberal articles and react to them. And of course, you don’t want to disagree with the liberal authors ’cause then the teacher might grade you poorly. So there’s very little opportunity for you to actually show your opinion in the class.

RUSH: Let me ask you this: Did this teacher teach everything but English? Was her class mostly every day a current events class promoting her political point of view?

CALLER: It was quite often that, yes. At one point we actually… She gave around a little paper to sign to stand up for LGBTQ community, and we had… We didn’t have to, but it was a choice that we could sign it and put it on our locker. So this class was extremely, extremely political.

RUSH: But I’ve got a point here. If you have an English teacher, what ostensibly…? Was this English composition, was this English literature, was this learning to read and write English? What kind of English class was this supposed to be?

CALLER: Yeah, it was supposed to be reading and interpreting literature, mostly.

RUSH: Okay, and there was some of that. But mostly you got this woman’s opinion on current events every day? 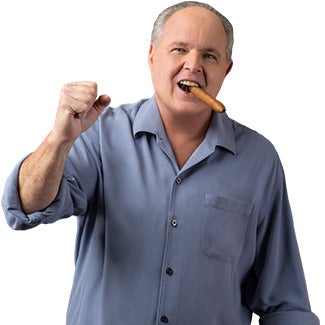 RUSH: And you had to participate in her activism like these LGBT stickers, forms, or whatever that you had to plaster in your locker, right?

RUSH: When it came time to give tests, did she provide the answers to the students so that they would readily pass, or not?

CALLER: Uh, yeah. There was actually… I mean, one test was comprehension of a book, and it was actually drawing. We had to draw a scene from the book.

RUSH: That was the test?

CALLER: That was the quiz, yeah.

RUSH: And this is English lit; this was not art.

RUSH: So all you gotta do is draw. My point is I’ve heard of teachers who turn history class into a daily monologue that was anti-Republican, anti-conservative, pro-liberal. And once in a while she would give the class an actual history exam, but provide them the answers so that they would all get great scores so it would look to anybody else like she’s doing a great job teaching history. When in fact, she was using her class to propagandize her students in something other than the stated subject matter. Just wondering if that’s the same thing that you faced in this class?

CALLER: Yeah, it wasn’t so much the tests and trying to propagandize the test specifically and force the children to get good grades. But it was mostly… Like, she’d start most days with the current political events and mostly her opinions about it.

RUSH: I think this is probably common. I think this is what passes for public education today in a lot of classrooms. On purpose. The purpose is to propagandize you or to indoctrinate you, not to teach you, and there certainly probably wasn’t any critical thought taught. Sounds like you held up well, though. I appreciate the call.