McCain Sent a Minion to Pick Up Dirt on Candidate Trump, and Hillary Is the Only One Who Rigged an Election in 2016

RUSH: I could read these headlines to show you why a deranged Democrat went out and tried to assassinate a bunch of Republicans. I could easily show you these headlines, read you these headlines to demonstrate the left’s hatred for Donald Trump and conservatism. You remember when the Russians claimed to have information on a presidential candidate? Do you? You don’t? You will in mere moments when I remind you, because it was just two years ago.

The former candidate and current U.S. senator sent a minion clear across the Atlantic to get it because he wanted to damage the Trump campaign. He wanted to destroy the Trump campaign. Now, we can understand why. McCain in his mind, had been insulted by Trump over the comment about Trump not respecting military people that get captured. But McCain’s anger at Trump went even beyond that.

Look, you know what we don’t hear about? We do not hear about the real rigging of an election. That has been reported, it has been documented, it has not been objected to, it just remains undiscussed. And it did result, we believe, from Russian interference.

There is a hard example of Russian collusion — well, we don’t know about collusion, but we’re told that it was Russian hacking that get into the DNC server. But you want to talk about rigging an election, the Democrats did it, not Donald Trump, not the Russians, the Democrats. Debbie “Blabbermouth” Schultz had a rigged game going to guarantee Hillary would be the party’s nominee in 2016.

No matter what Bernie Sanders did, no matter how many delegates he was getting, Hillary was always going to trump this, and Bernie never had a chance. That’s the real rigging of an election; that’s the real interference in an election, and nobody talks about that, including Crazy Bernie.

The only people that used to talk about it were crazed Crazy Bernie voters, but even they tired of it because their hatred for Trump somehow overpowered their disgust and anger at the disrespect their own guy had received. So hard evidence of genuine collusion: McCain sending an emissary to pick up that golden showers dossier so he could use it to harm Trump. That’s what I remember.

People in campaigns will go anywhere to get dirt on their opponents. And, if somebody calls you and claims they have dirt on your opponent, many will open the door and let them in, which is what happened to Donald Trump Jr. Dan Rather was so desperate to get this kind of help for John Kerry in 2004 that he forged documents about Bush and the National Guard to help the cause.

Now, Rather ended up getting fired, but he’s back with a modicum of respect within the community of certified and certifiable journalists. So we hear these never ending allegations about collusion and rigged elections and all this and yet it really happened on the Democrat Party side of the ledger. To this day, the Democrats will not turn over their hacked server, their hacked computers or hacked network devices to the FBI for forensic analysis.

I wonder why that is?

Why don’t they want anybody to see it? What they want you to believe is that the Russians hacked poor old John Podesta’s computer and then all of those embarrassing emails, none of which were denied, by the way, ended up on WikiLeaks. So the Russians were working with Trump to hack Podesta and then Podesta’s emails end up on WikiLeaks, thereby destroying the Hillary campaign. Except the Russians didn’t have anything to do with Podesta. Podesta fell for a phishing attack.

I’m sorry, folks. You probably heard me say this so damn many times you’re getting tired of hearing it. But it’s the only way I know to deal with this, because every day we are slathered with the biggest bunk of lies and distortions and half-truths that I can recall. And all the while the American left is doing its best to bring down this country as founded.

RUSH: Also on the Donald Trump Jr. situation. Touched on this at the beginning of the program. Reince Priebus was on I think it was Fox News Sunday, one of the Sunday shows. And he put it out there that this whole thing might have been a Democrat setup. What happened is that a lawyer, a female lawyer by the name of Natalia Veselnitskaya, requested a meeting with somebody in the Trump campaign at Trump Tower back in June of 2016. She got the meeting by telling them that she had some dirt on Russian connections to the DNC.

So essentially she had some oppo research, and apparently Donald Trump Jr. took the meeting and it turns out that when she got in there she didn’t have anything whatsoever, like dirt on Russian connections. She lobbied instead for an easing of something called the Magnitsky Act, which imposes sanctions on Russia for human rights abuses. Donald Trump Jr. abruptly ended the meeting and the campaign didn’t report anything about it because she got in there under false pretenses. 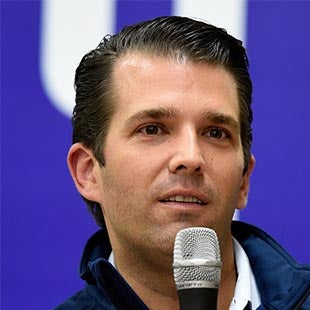 Priebus thinks that what happened was that it was a potential setup by the Democrats, the Hillary campaign, because of their ties with a company called Fusion. Fusion had something to do with the golden showers dossier folks. And so the Priebus wing is saying this thing could have been a setup, we didn’t do anything about it because we foiled it. She got in under false pretenses. It’s a big nothing burger in terms of collusion, in terms of substance, but the media can harp on this because it looks like Trump’s son met with a Russian. (gasping) And all you have to do is meet with a Russian.

The thing that blows this to smithereens is — we’re talking June of 2016 — if there was collusion, why, it would have already been underway. If there was collusion, if Trump was colluding with the Russians, this woman would not have gotten in the way she did. They wouldn’t have needed to talk to this woman and this woman wouldn’t have been blind calling Trump’s son. “I need to talk to somebody. I’ve got dirt, I’ve got dirt on the Hillary campaign.”

The fact that Donald Trump Jr. took the meeting — well, make of that what you will. I mean, you could have I don’t know how many explanations for this. A son wanting to be in the loop, wanting to appear to be in the loop. A son being protective of his father, any number of things. The media is focusing and harping on the criminal, the potential criminal aspect of this. It’s just laughable. There’s nothing here. The woman didn’t even have any opposition research on Hillary. By the way, since when do campaigns reject opposition research on their enemies?

Ever heard of the Clinton war room, headed by none other than George Stephanopoulos now mainstream news anchor at Good Morning America. And what was the purpose of the war room? The purpose of the Clinton war room was multiple faceted: to destroy all of the women who might come forth and say they had slept with Bill Clinton or vice-versa. And at the same time just literally destroy anybody else who had any assertions about Clinton and to also dig up opposition research at the time on George H. W. Bush.

So somebody calls in and says, “I’ve got some oppo research, I’ve got some real dirt on the Hillary campaign. And the Trump people, ‘Sure, come on in, see what you got.'” It turned out she had nothing. It was a ruse to get in there to make a pitch on the easing of the Magnitsky Act. Big whoop. Really that’s all there is to these two things. Except the Drive-Bys are not going to let this Donald Trump Jr. thing go.

This is why it’s becoming intellectually challenging to stay interested in this, folks, because there’s nothing here. And, of course, after the summit meeting that Trump had with Putin, we haven’t got into that yet, but whoa. I mean, the media is just chastising Trump for not hitting Putin hard enough. They’re chastising Trump for the way he brought it up with Putin. The media is universal in its assessment that Putin made mincemeat out of Trump, that Putin humiliated Trump, that Putin showed what a rank amateur Trump is, and it was a crying shame.

RUSH: Okay. Starting on the phones in Fargo, North Dakota. This is Matt. It’s great to have you. How are you doing, sir?

CALLER: I’m doing well there, Rush. It’s an honor talking with you.

RUSH: You know, my cousin is in Fargo this week. There’s some judicial conference there, and he was telling me he had to go to St. Louis, to fly to Minneapolis to get to Fargo. So I just wanted you to be aware —

CALLER: Well, he might have a good marshal protecting him. I have a good buddy that’s in a U.S. Marshal agency that is there as well.

RUSH: Well, that wouldn’t surprise me because that is the protection agency for federal judges. So, anyway, my cousin goes to Fargo of all places and our first call today comes from Fargo. It’s karma. Anyway, what’s up, Matt? Why did you call? I’m glad you did.

CALLER: Well, I want to talk about two points on the whole Russia-United States collusion. My first point, and why it doesn’t makes sense, is the issue Donald Trump wanted to build up our military, putting up air defense missile systems in Poland, Ukraine, the issues with North Korea, how he wants us to put more spending into our military. That just doesn’t work well with Russia. The United States and Russia have never gotten along well and Putin doesn’t want a stronger America. So that whole issue of the collusion just doesn’t make sense on that aspect.

And the second point, if I can make, is a political aspect. You look at Russian history and Russian history has been predominantly communist or a collective society. We have gone down that road under President Obama, and Donald Trump is kind of bringing us back into this individual initiative, individualism, getting back to the Constitution. And they don’t want that, either. So this whole point of the collusion just does not make any sense.

RUSH: You know, this is actually an excellent point, and that is when you talk about the collusion, the people alleging it, the one thing that they very rarely detail is why Trump. And when they do detail it, they claim, “Well, of course, Putin would not want Hillary. She’s too experienced. She’s too tough. She’s too wary. She knows. She’s been around. Trump is a buffoon who could be easily manipulated by Putin.”

That’s what they say, when they address it. The fact of the matter is here old Matt is right; Hillary Clinton is seen as a joke. If Putin wanted anybody to win this election, it would have been Hillary Clinton, because with Hillary Putin is closer to where he wants to get than ever. It would be like a continuation of Obama, who was totally deferential to Putin.