My Theory on McConnell Is All the Rage

It’s about McConnell. Remember what I said? I said, what if McConnell purposely submitted a bill that the CBO would score atrociously, claiming 22 million would lose their health insurance and 45 million would die and whatever else it was gonna cost? And then would resubmit the bill after learning how the CBO scored it in order to get a bill that they score in a great way.

People said, “He’s not that smart. Come on, Rush. They don’t even want to pass this. You’re falling into this trap to think the Republicans believe in small government.” I didn’t say that. I’m simply talking about legislation. I mean, folks, let’s make no mistakes here. The current iteration the Republican Party has no conservative instincts remaining here. Whatever they’re doing here, it’s not about returning health care to the private market, reducing government, getting it out of the equation.

However, the legislative game that McConnell is playing, I ran the theory by everybody, it was pooh-poohed, and now wait ’til you hear the audio sound bites as the program unfolds. I mean, there’s a whole lot of people who think that what I stated yesterday is exactly what’s going on.

None, of course, credit me. Not what this is about, but I mean you got F. Chuck Todd (paraphrasing), “He’s such a legislative wizard. He’s such a wizard. Don’t count McConnell out.” And even Dr. Krauthammer on Fox News is claiming that McConnell has done an end run here to end up getting a CBO surplus after he submits his next bill and it gets scored.

RUSH: Okay, now to Mitch McConnell. I want to take you back to this program yesterday where I, out of the blue, made the following point. This is gonna be a couple minutes, but I want to set this up. I want to actually air what I said yesterday rather than paraphrasing it.

RUSH ARCHIVE: Is Mitch McConnell this smart? I have a theory for you. Is Mitch McConnell this — is he this strategic, does he care this much? Try this thought. Did Mitch McConnell put a Trojan bill, Trojan horse in front of the CBO? In other words, did he purposely write a bill that would create this CBO score? (imitating whiny lib) “Your bill is going to cost $22 billion and cost 400 million lives” or whatever it says. So that he could learn why and how they scored it the way they did.

Does McConnell think that way, do you believe? I’m throwing this out as a possibility. Could it be what we’re dealing with here? Could McConnell purposely have written a bill that would get this score with this methodology so as to find out how they were gonna score things, what their math was gonna be, and then take that and write a new bill and dare them to come up with the same score and thus expose what the CBO is doing?

Just throwing it out. I know. The flaw is the CBO’s never going to score anything favorable for the Republicans, what if McConnell can expose that, though? What if the Trojan bill exposes that the CBO is not nonpartisan? Does he even want to do that? You know, these guys swear by the CBO. Look, you know me, Mr. Optimistic, I’m just looking on the bright side of everything. I know it seems out of character, but I’ve never believed the CBO is nonpartisan. Never.

RUSH: The reactions I got to that were along the lines up of: “Rush, you’re giving McConnell too much credit. He’s not that smart, number one. He doesn’t care this much about it.” And then people said, “He doesn’t want it to pass. He likes the score from the CBO, that it’s gonna cost, 22 million people are gonna lose their health care and all this money. He likes that because these Republicans don’t want to do this.”

And, by the way, I give that theory some credence. I mean, take a look what’s really happening here. Is it not obvious that — what is the Republican recipe here? What is the conservative recipe for this? It’s not tinkering with Medicare, and it’s not tinkering with Medicaid. The conservative solution is to get rid of this, to get rid of every web of deceit in this bill that involves government and start over. Just repeal this and put together health care plans that focus on the trust in the free market, instead of tinkering around the edges and calling it repeal.

But that’s what we’re dealing with, so it’s in that framework that I offer my theory. So you’ve heard the theory. You’ve heard what I heard from people, “Nah, not possible, he doesn’t care that much, he’s not that smart.” But I want you to hear some reaction from others in Washington who may think that I’m really on to something here, although they don’t mention my name, of course, but you’ll hear when we get back.

RUSH: Okay, sound bite 10, go in order here. Okay. So the theory that Mitch McConnell, a Trojan bill, exposed the CBO, get a phony read so they can resubmit the bill in a way they cannot score it badly. Here’s F. Chuck Todd on the Today Show today. Matt Lauer said, “The House had a hiccup when it came to their healthcare bill. They went back to work. Then, they passed that bill. Now, the Senate has pulled the vote. Are we seeing deja vu or something different?”

TODD: I would never write off Mitch McConnell’s ability to get anything through the United States Senate. The guy, you know, defied the odds and he pulled off the Supreme Court issue that he did last year and ended up getting a conservative Supreme Court justice. So the guy knows how to maneuver legislatively. If it were anybody else, this morning we’d be saying this bill is dead. Only because Mitch McConnell is so good at sort of the behind-the-scenes aspects of this is this thing still on life support.

RUSH: All right. So you have an inside-the-Beltway establishmentarian, F. Chuck Todd, a dean of the Drive-By Media saying, “Hey, this McConnell guy is one crafty dude. If there’s anybody that knows how to slither his ways around in the legislative vats, this is the guy.”

Here is Dr. Krauthammer on Fox News Channel’s Special Report during the All-Star Panel. Bill Hemmer was filling in last night. And he said, “Dr. Krauthammer, the last time we were here with the health care was in February and the House of Representatives. How much trouble is it really in, or do we know yet?” 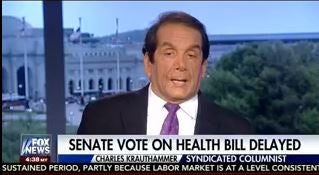 KRAUTHAMMER: When Mitch McConnell is unable to deliver on time, you know this is difficult, because he is sort of the wizard of Capitol Hill. He’s an incredible tactician. The one thing he has going for him other than his own skills is the fact that in that CBO report, which generally had a negative effect in terms of public opinion, they projected a $320 billion surplus, money from the Treasury coming out of this bill, which means that Mitch McConnell can deal from that lump of money, some of it, maybe majority of it, to buy off — let’s be sort of very realistic about this — to buy off the senators who are holding out.

RUSH: So it’s a Trojan bill possibly because despite the fact that 22 million lose their health insurance, it creates a surplus to the Treasury of $320 billion. McConnell can resubmit the bill and use some of that money to buy off senators. Now, when we say “buy off senators,” what we mean is if, you know, Senator Blow It All wants a dam in his district, then here’s the money for it. Or if senator this or that wants something.

And in the process, Dr. Krauthammer is alluding to the fact that he is a wizard of Capitol Hill, an incredible tactician, and one thing he’s got going for him other than his own skills is the CBO report. Dr. Krauthammer and I find ourselves on the same astral plane, if not on the exact same course. And F. U. Chuck Schumer, he had some comments.

RUSH: Okay. Trump has gone back to the well here. We have a little sound bite. This is this afternoon in Washington at the White House. He welcomed the world champion Chicago Cubs to the White House, and during the event, reporters started asking about the Senate health care reform bill, and Trump said this… 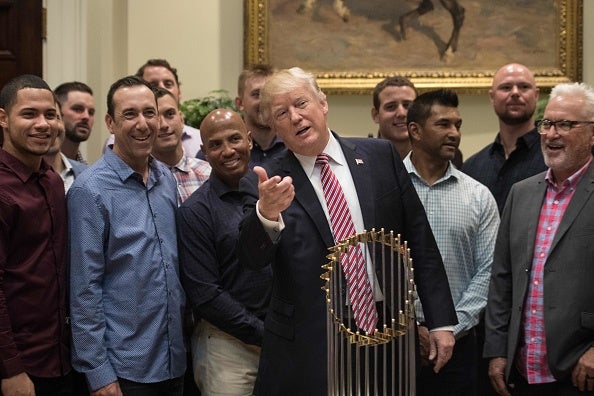 THE PRESIDENT: Just to do a little official business: Health care is working along very well. We could have a big surprise with a great health care package. So now they’re happy. All right.

REPORTER: What do you mean by a big surprise, sir?

THE PRESIDENT: I said you could have a great, great surprise. It’s gonna be great.

RUSH: “Great surprise. We could have a huge surprise with a great had been package,” he says. “So now they’re happy.” Who is “they”? Who is the “they’re happy”? Is it Senate Republicans? Who’s happy? And then the reporter says, “What do you mean, ‘big surprise,’ sir?” “I said you could have a great, great surprise. It’s gonna be great.” What, has Trump been taping the Senate negotiations? I’m just asking. What do you think the surprise is? And it’s entirely possible there won’t a surprise.

Maybe the surprise is that they have an agreement. Maybe the surprise is they’re gonna get the votes. You know, Trump called ’em all up there to the White House yesterday for four o’clock meeting. But this is masterful. “What do you mean, ‘great surprise’? What’s the surprise?” “You just wait. It’s a great surprise. It’s gonna be great. It’s gonna be the greatest health care bill for the greatest country, and only I could have done it. It’s gonna be so great. It’s just gonna be the best. Better than has ever been. Health care is never gonna be better. This is it. You just wait. Huge surprise.”