RUSH: Okay, time for the audio sound bites of Phil Donahue. I promised this yesterday. We want to get to it. Donahue was on CNN’s Reliable Sources on Sunday with their media expert there, Little Brian Stelter. They’re talking about Trump’s presidency, and Stelter says, “Okay, Phil, what do you see out there? We’re five months into the Trump presidency. You’re not known for being a very conservative guy, Phil. What are your thoughts here? And have you spoken to Vladimir Posner lately? How’s he doing in Russia?”

DONAHUE: How did this happen?

DONAHUE: And I think they’re gonna discover that — well, I think it’s already revealed. These are angry people. These are, as we know now, white working-class people, Pennsylvania, Wisconsin, Michigan — these are the people who make things. Or — and they don’t — maybe they haven’t had a raise in eight years. The rumor is that their company is being sold. Their kids can’t pay back their college loans. Sooner or later they’re gonna go kaboom. And they did, and kaboom expressed itself in the election of Donald Trump.

Now, don’t be fooled. Donahue doesn’t like you white working-class voters, even though you used to largely make up his TV show audience. He doesn’t like you. He thinks you’re bigots and racists and you just ought to learn to accept what life brings. It’s part of equalizing society. So Little Brian, dazzled here, Little Brian, he’s talking to Phil Donahue, all right? And he’s dazzled. He says, “I think what you’re saying is, Phil, sure, there’s people that represent Trump’s point of view on TV, but we’re not seeing enough focus groups and enough interviews with normal Americans.”

DONAHUE: Now they’re producing these — this is fascinating me — the other night at his rally, there were four or five really cute white girls. There are black people at those rallies but you gotta look for ’em, and they’re behind him, who are being produced. These little girls are taking his picture, he turns around, he faces them and they’re taking — and then they’re showing.

STELTER: I thought that was a coincidence, huh?

DONAHUE: Oh, come on. I mean, this is a brilliant management of campaign —

STELTER: It makes for a great spectacle. 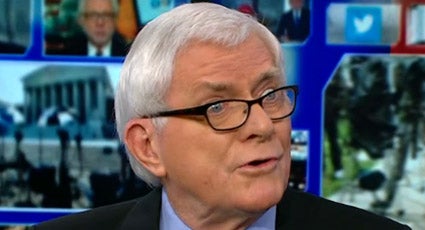 RUSH: So Phil is trying to tell Brian what he’s missing. That Trump’s playing ’em like a fiddle. He’s got just the right number of black people behind him, but the only black people there are right behind him, and there aren’t that many. And these cute white girls, they come up and they act like Trump’s the Beatles and they start taking pictures and he faces them and they’re taking, and they’re showing — and Little Brian got nervous, when Trump said little girls were showing, Little Brian jumped in there, you don’t think that’s a coincidence? And Phil, oh, no, no, this is stage managed, all of this is brilliantly produced!

Which Brian ought to know they used to do this with Bill and Hillary Clinton constantly, including giving her the questions in a debate. Hello, Donna Brazile. And then finally Brian, still dazzled that he’s got Phil Donahue there, “Do you feel like the country’s ever gonna get over the election, Phil?” Of course, the country largely has. It is the media and its deranged base which hasn’t. But, anyway, the question: “Do you think the country’s ever gonna get over the election? The president was tweeting about it again this morning about Bernie Sanders and Hillary Clinton. Are we stuck, Phil? Are we simply stuck? Are we never gonna get out of this?”

DONAHUE: There’s no bodies in the street, and we’re not shooting each other yet. But, you know, imagine, compare him, compare Trump to Eisenhower. I mean, for example, this is my president, who I grew up with in the forties and the fifties. This is bewildering. And it shouldn’t be. We got Donald Trump because we let it happen. We didn’t vote, we were apathetic, and we looked up and think now, holy cow, we got a — we got a — I don’t want to say the — we got a p-u-s-s-y grabber for president. And we are appalled, we can’t figure this out. And one of the reasons we can’t figure it out is because elite media, as he would call it, failed us.