Another Installment of “Why They Hate Trump”

RUSH: Trump threatens Assad, could start World War III. Trump travel ban may trigger Muslim riots in U.S. Trump’s attacks on media threaten First Amendment. This is how it works. By the way, two stories in Politico today. One of them looks like it came out of Vanity Fair. I mean, even the font looks like Vanity Fair. One story: “Goodbye Nonpartisan Journalism. And Good Riddance.” Good-bye nonpartisan? When did we ever have that? When have we ever had nonpartisan journalism? Who wrote this? Mitchell Stephens is saying sayonara to nonpartisan journalism and good riddance, like it’s about time we got rid of fairness and objectivity.

But the second piece is the biggie. I’m telling you, this is a rip-off of New Yorker or Vanity Fair. I mean, even the cartoon graphic looks like it came out of the New Yorker. I guess it doesn’t matter. It’s all the left-wing media. It’s a column entitled, “This Town.” It’s not about New York, though, it’s about Washington, and the headline: “It’s the End of Small Talk in Washington.” The subhead: “There may be no city as unsettled by Donald Trump as the one he just moved to. A social anthropology.” 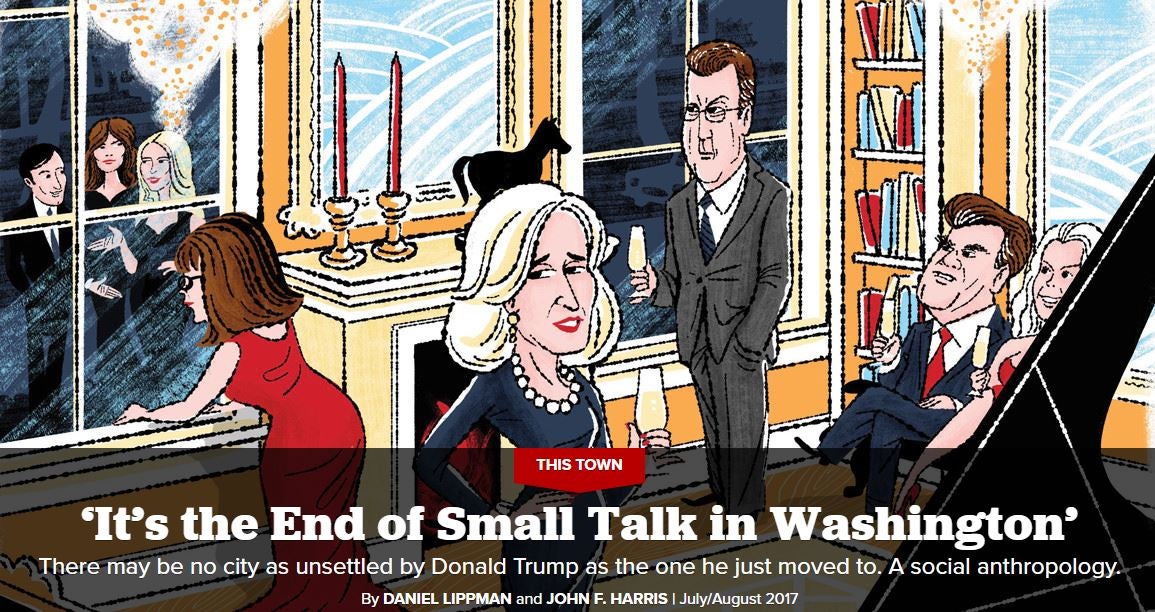 You know what this is? This is the establishment in Washington full frontal admitting that Trump is not sophisticated enough, he doesn’t fit in with the aristocracy the nation’s capital. They don’t use the word.

They don’t use the word “aristocracy,” but that’s exactly how this thing reads. That there is a governing, a sitting, an existing aristocracy, a ruling class, a permanent elite in Washington which does not include every elected, ’cause some of those come and go, but there is a permanent elite. And you know what, Trump hasn’t even reached out. He hasn’t invited them to a cocktail party. 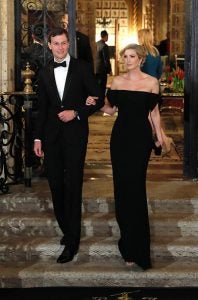 You know, we say that many people on the right say what they say hoping they will continue to get cocktail party invitations, and those people, “Aw, come on! Can we get rid of that old trope? There aren’t any cocktail parties. That’s all BS.” This thing makes clear that all there are in Washington are cocktail parties, and it even talks about how Kellyanne Conway goes to them. She goes to them and the story talks about how much money she makes. All of these are qualifiers in order to get into this elite aristocracy. But she shows up.

Another part of the story said when Barack and Michelle moved into the Kalorama area of Washington, they sent notes, personal notes to all the neighbors begging their indulgence for all the new security measures as the Obamas came to town. But when Ivanka and Jared moved into the same neighborhood, they didn’t send a note to anybody. They didn’t apologize for anything. They didn’t warn the neighborhood that anything was gonna be happening been security-wise. They just moved in and went (raspberry) you. And you don’t do that to the Washington establishment.

So it’s another in a multiple media installment of why they hate Trump. And it’s what I’ve always said, he’s not sophisticated enough, he’s not elite, and they are never, ever gonna accept the guy. No news here. I mean, in terms of anything being revealed, it’s just that it’s finally effervescing here to the surface and all of these people are admitting it.