RUSH: I mentioned earlier, C-SPAN, where I was blamed today for this shooting. First up, it’s audio sound bites 2 and 3. This is Washington Journal, viewer call-in segment, Marianne from Pennsylvania. 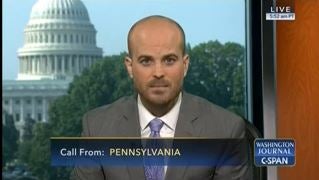 MARIANNE: Let’s go back to the beginning of Rush Limbaugh on talk radio. Let’s talk about hate and where it really started. I’m sick and tired of the Democrats always being put down. Nobody remembers how close this was the last eight years of President Obama and what he went through. So let’s really remember who has started the hate in this country. How about the congresswoman that was shot in the head? It’s amazing that she survived. Wake up, the other part of America, because that’s basically what we are, two parts of America. Look in the mirror before you start throwing things around.

RUSH: We have a guy who targets Republican members of Congress, shows up at a baseball practice, asks a bystander, “Are those Republicans or Democrats?” He’s told Republicans. He opens fire. We find out the guy hates Trump, hates Republicans, believes every Looney Toon, wacko, leftist claim there’s ever been made about anything, and this woman blames me and has to talk about something to do with Obama and everything he went through and let’s really remember who started the hate in this country. And then she brings up Gabby Giffords being shot. I’m sorry, but you guys tried to blame Sarah Palin for that. The media was leading that effort. Sarah Palin wasn’t even in town. And all because there was a graphic of an image through a sight on a rifle. Another caller, C-SPAN’s Washington Journal. This is Richard from Massachusetts.

RICHARD: This hatred began, I believe, incivility in society began years ago when conservative right-wing radio led by guys like Roger Ailes, put on Rush Limbaugh and rest of that crowd. They keep talking about the liberals from the left. Well, I watch NBC, and I watch CNN. I don’t know what they’re talking about.

RUSH: Exactly. He watches left-wing media, and he doesn’t have the slightest idea. All he knows is what they lie to him about. That’s all he knows. He has no idea. He thinks Roger Ailes was instrumental in my radio program. Roger Ailes produced my TV program. He had nothing to do with the radio show. I didn’t even meet Roger Ailes ’til 1990, two years after the radio show began. But these people believe what they believe.