It Wouldn’t Bother Me If Trump Fired Mueller

RUSH: So, again, we’re gonna get to this ongoing narrative here that Trump is thinking about firing the independent counsel, special counsel, Robert Mueller. There doesn’t appear to be any truth to that. That got started with Chris Ruddy, a very, very close friend of President Trump’s. They’re very tight, those two. Ruddy was in the White House, had a meeting, and he heard Jay Sekulow say something on TV that it sounded to Ruddy like Trump was considering firing Mueller, but apparently that’s not the case.

I, frankly, folks, am kind of getting into this sooner than I want to, but I don’t know why Mueller… I don’t understand this at all. I don’t understand. We now know that Mueller has hired a bunch of Obama and Clinton donors to be his investigative staff. I mean, he’s hired some genuine sycophants. I’m sorry to be using that word, but it applies. He’s using some… He’s hired some genuine, true Obama and Clinton believers, and some of them — many of them — are lawyers. A lot of them are huge donors.

For Mueller to go hire a bunch of these people? The idea that the independent counsel’s fair and open-minded and the scales of justice will be equally balanced? What a crock! These are prosecutors! What is the objective of a prosecutor? To send somebody to jail. That’s the objective. They’re not in there — they’re not in these jobs — to let people go. They’re not in these jobs to let people off. An independent counsel or any prosecutor is there to get convictions, and if they don’t think they can get convictions, then they try to get plea deals on guilty pleas.

But can you think of an independent counsel who has ever finished his investigation and announced he didn’t find anybody who did anything wrong? Nope! You can’t. Because there’s no way that could ever happen. There’s so much money spent on these things that to do an investigation (that takes years, certainly months) and then to call a press conference and say, “Hey, we couldn’t find anything anybody did wrong.” What were you doing? “Well, we investigated thoroughly, and nobody broke any laws.

“We can’t find any crimes here.” Whew! The guy wouldn’t get out of the briefing room alive. So Mueller’s gotta find something. The fact that he’s been hired alone means he’s gotta find something. And if he can’t find it, he’s gotta manufacture it — as in a process crime, catching somebody lying to federal agents or lying to federal prosecutors. So I don’t understand why. I know Rosenstein, the deputy AG, hired the guy, and I know he’s got a great reputation inside the Washington establishment (which should tell you everything you need to know).

Now, the icing on the cake: The guy’s hiring a bunch of Democrat operatives as his lead lawyers and investigators. And we are told, “Don’t worry that! These are the epitome of fair and objective. These are nonpartisans.” There’s no such thing as a nonpartisan leftist! There just isn’t. Look, it is a long way around saying that, if Mueller got fired, I wouldn’t be upset by it. “Rush, can you imagine the storm that would erupt? Fire Comey and then fire this guy?” He can do it. He can do it.

He runs the executive branch. Is the president of the United States obligated to hire people whose objective it is to destroy him, and is it the obligation of the president to stand aside and let that happen? “Well, no, Rush, but that’s not what the independent counsel is. You can’t sit there and say that the guy’s been hired to destroy Trump.” In this case, I think we can. Comey admitted that he did what he did to assure the hiring of a special counsel, because Comey had become compromised. 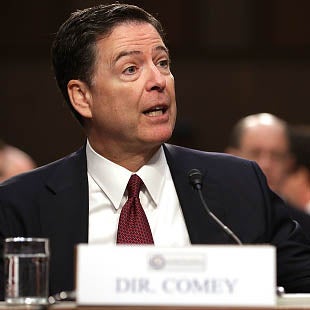 Anything Comey would have rendered as a result of his investigation would have been problematic because of all of the mistakes that he made in the Hillary-Loretta Lynch thing. We have details on that. There’s more on that today, too, and the mistakes he’s made with Trump. So he had to get an independent counsel. But what does Comey want? Is there any doubt what Comey wants? Comey wants Clinton exonerated, wants Trump in trouble. So we’ve got Robert Mueller, who we are told is not just a close associate but these are BFF-type guys (Best Friends Forever), Mueller and Comey.

So just at the outset here, this picture doesn’t appear kosher. It doesn’t appear up and up to me. The fact that so many leftists in the media are all excited about this? I don’t know, folks. “But, Rush! But, Rush! He can’t fire the FBI director and then the independent counsel inside three weeks.” Yes, he can. It’s just whether or not he wants to put up with the storm, whether he wants to deal with it. I guarantee you that if he did it, you would see voluminous opposition from the right — uh, from the Republicans — and from various supposed conservative publications, think tanks.

I mean, it would be vicious, not to mention what the Democrats and the media would be saying. But at the same time, is a president obligated to tie one arm behind his back? Is a president obligated to hamstring himself? “No, Rush. No, Rush. But a president’s not allowed to get away with cheating, either.” What cheating? “Collusion with the Russians, Rush! You know it as well as I do!” No, I don’t know it. That’s the whole thing that bothers me. We don’t have any evidence at all of crime having been committed anywhere.

All of this is Twilight Zone-ish. It’s surreal. An independent counsel? Are you kidding me? And the moment we get one, what does the left start saying? (sing-song) “Waaaatergate! Waaaatergate!” What’s Watergate? At one time, the Washington establishment was able to get rid of a Republican president in office, and they have been salivating to do it again ever since. And now they think they’ve gotten really close. And an independent counsel is the first step. And what did Nixon do? Nixon fired Lawrence Walsh, who was the independent counsel looking into Watergate.

He wanted to drain the swamp.

He wanted to turn the place upside down and drain it out.

And look what is being employed here to stop Trump. The Democrats can’t stop him in Congress with votes. So the Democrats are not a factor. The media is their best shot at stopping Trump with just fake news, lying coverage; the effort to destroy his character, his life, his politics, his family and everything else. But now look at what they’re doing. The epitome — the quintessential epitome — of the way the establishment operates: An independent counsel. And I know what you’re saying. “But, Rush! But, Rush! His own Justice Department hired the guy.” I know. It baffles me. Rosenstein, the deputy attorney general, hired the guy.

Why? Well, because there’s pressure out there from the Democrats. We need an independent counsel because Comey so botched everything he was doing. Truth be known, whatever Comey’s come up with nobody would have accepted because he’s been so compromised here.

So, to me, it looks like the opposition here is getting their ducks all in a row. And again, over nothing. Now magically, you know, for a year the story is collusion, collusion, Russia and Trump. Let’s not forget that we remembered yesterday that it was the Obama administration and the Department of Homeland Security that was hacking various states and their election systems. States that had refused to go along with an Obama idea to nationalize aspects of elections. States that had said no, Obama was hacking them due the Department of Homeland Security!

All these things the Democrats are throwing their hands up in anger over they have done! They have hacked voting machines. They have hacked states’ voting systems. Obama did it. For a year we had to deal with this allegation of collusion between Trump and the Russians. And then the Comey hearings. Well, before that, the Comey firing.

And in the Comey firing, Donald Trump mentions in his letter (paraphrasing), “Despite the fact that you’ve told me three times I was never a target of the investigation, you’re still a bad guy and I’m still getting rid of you. Sayonara.” And the media said, “There’s no way. Comey, no special counsel, no FBI director, no attorney general would ever tell anybody they’re not a target. That’s never done. That would never happen. Trump is lying.”

He’s owed an apology by everybody in the media who carried that lie and all the Democrats who did; Schumer, Fauxcahontas Elizabeth Warren, and any number of them. But the point is that after a year of this, of collusion, now there’s nothing there, and automatically we have an obstruction investigation now. So Trump was accused of colluding, but Comey blew it and admitted to everybody that Trump was not a target.

But now, now because Trump appealed to Comey on Flynn’s behalf, saying, “Hey, come on, the guy’s a good guy” now we have an obstruction investigation. Why wasn’t obstruction being investigated along with collusion? Comey has known since whenever that happened that Trump said to him whatever he said about Flynn.

And there are others, “What is the sense in this? There’s no need for any of this, whether it’s an intellectual feast or not. We can’t find a crime here.” The only crimes we have are those crimes that have been made up as charges in fake news stories. And now we have an independent counsel who’s hired loyalists to Obama and Hillary Clinton as his lead investigators? And we’re supposed to sit here and say, “No big deal. These people are the epitome of balance and objectivity and fairness. Just because they may donate to Democrat candidates does not mean they cannot look at evidence objectively.” BS, in capital letters.

And we will be back.